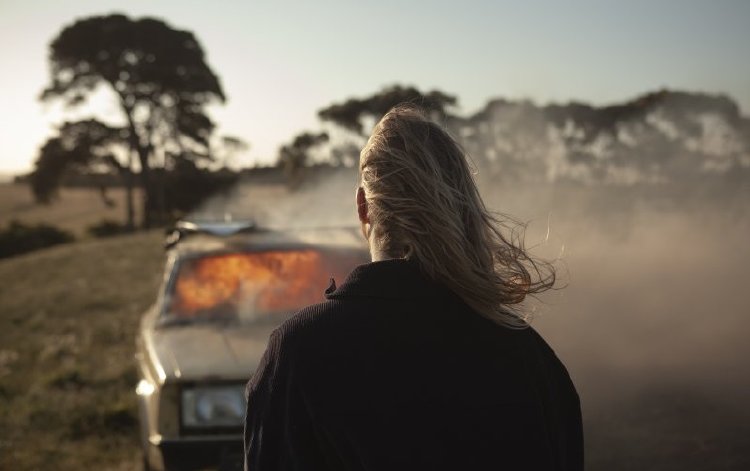 When he was twelve he was interviewed on television while hospitalized for injuries sustained from playing with firecrackers.  In 1996, less than twenty years later, he would be on television screens worldwide for the worst mass shooting in global history.  The odd loner whose own mother (Judy Davis, "Husbands and Wives") found him difficult had had some solace with eccentric heiress Helen (Tasmanian Essie Davis, "True History of the Kelly Gang"), but her death exacerbated his isolation and when he tried to reach out, he was rebuffed with his childhood nickname, “Nitram.”

Director Justin Kurzel and his screenwriter Shaun Grant, who have examined Australia's darker side with "The Snowtown Murders" and "True History of the Kelly Gang," complete a trilogy of sorts with “Nitram.”  (Nitram is the backwards spelling of the killer’s real name, which IFC Films has asked not be mentioned in reviews of the film.)   This psychological portrait of a good looking kid who nonetheless repelled people with his childlike and aggressive inappropriateness is a warning about what can happen when a society with lax gun laws shuns those they fail to understand.  Caleb Landry Jones (“Antiviral,” "The Outpost"), who won best actor at Cannes for this role, digs deep, traversing the world with an optimistic pushiness that frequently curdles yet expressing delight when given attention.  The film is deeply unsettling without being overt (the Port Arthur shootings are not depicted), omitting certain biographical details (a sister, three girlfriends) and more sordid behavior (animal torture, pornography).  The film has been divisive in its native Australia, but Kurzel and Grant have succeeded in delivering both a strong gun law message and artistic achievement.

After opening with archival footage of that hospital interview, we meet the adult, long blonde locks obscuring his face, twirling about in white overalls while tossing firecrackers in the air as a neighbor curses in the distance.  His mother calls him in for dinner with a downturned mouth.  His father (Anthony LaPaglia, "Annabelle: Creation") is in a happier frame of mind, believing his long held dream of buying Seascape, an Oceanside B&B, is right on the horizon.   But while dad is openly more compassionate with the boy, he is no less successful at controlling him and when his doctor (Conrad Brandt) suggests trying to cut his medication, his mother insists he needs his ‘tablets.’

Nitram spends his days dragging a lawn mower about trying to earn cash and finally finds a taker in lottery heiress Helen who lives in a grand old house full of cats and dogs.  Watching from an upstairs window, she’s amused when he can’t get his mower started, suggesting he return to walk her ‘babies’ whose free rein of her property belies the need.  With her hair gathered in a nonsensical topknot, her roots leaving her center part a white streak and her age inappropriate clothing, Helen is every bit the outsider Nitram is and sees humor and kindness in the intellectually challenged young man.  While even she is not amused by his fascination with guns (dad bought him an air rifle) nor his habit of grabbing the steering wheel while she is driving, she invites Nitram to move in with her.

After causing Helen’s car to flip over, killing her, Nitram spirals quickly downward.  In an odd scene, he beats his father cowering on the couch, yelling for the older man to put his pants on as his mother watches smoking in the doorway. Perhaps this is behavior learned from a psychiatric stint?  Is his father suffering from general depression or the setback of having been outbid for Seascape?  After making a threatening cash offer for the property to its new owners, we’ll see Nitram floundering in the surf with a board his mother had refused to buy him before a confusingly quick transition to his father’s body, a suicide, being loaded into an ambulance as, once again, his mother smokes.  When he arrives at the funeral in a blue suit, ruffled shirt and blue feathered fedora, his mother throws him out.  Then he begins to amass weapons.  In a chilling scene with a folksy older salesman all too eager to make a sale despite Nitram’s lack of a license – AR-15s and rifles are fine, apparently, as long as the customer isn’t buying a handgun or actually registering the guns – we are struck by the fetishistic display of weapons.

Each of the film’s four main actors is compelling, but the filmmakers also make the most of Nitram’s interactions with small supporting players.  A car salesman (Lucas Friend) is terrified by Nitram’s dangerous behavior during a test drive, yet sells Helen the car.  A surfer (Sean Keenan, "True History of the Kelly Gang") plays bait and switch with friendship.  A travel agent (Anita Jenkins) takes Nitram’s offer of accompanying him to L.A. in stride as she books his package.  Society sees something troubling in Nitram, but quickly takes its leave.

The film’s production gives us a real sense of time and place, paced with stretches of peace always shattered.  Cinematographer Germain McMicking ("Mortal Kombat") uses a coastal drone shot to suggest Tasmania (the filmmakers shot in Victoria to avoid upsetting locals) and contrasts the distant peace of Seascape with bustling groups of friends and families at Port Arthur.  The director’s brother, Jed Kurzel ("The Snowtown Murders," "The Babadook"), provides a disquieting score.            We hear about the events of April 29, 1996 from a television in an empty room.  Outside, Nitram’s mother smokes.