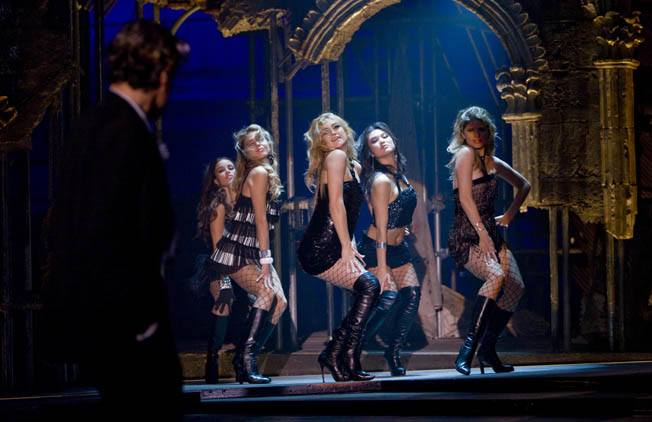 Revered filmmaker Guido Contini (Daniel Day-Lewis, "There Will Be Blood") is stuck in the middle of a high wire act. He has crew prepping at Rome's Cinecittà studios for his next movie, one that has so far eluded him. Guido slips out of a press conferences and runs to hide at a resort spa, but one by one he is found by his producer, crew, mistress, wife, fashion journalist, star and memories of his mother when he was just a small child of "Nine."

I didn't think it was possible for Daniel Day-Lewis to be anything but brilliant, but director Rob Marshall ("Chicago," "Memoirs of a Geisha") has seemingly accomplished the impossible. The filmmaker who cut his teeth with the overpraised musical "Chicago" has turned "Nine" into a flat and dull affair that is only enlivened by a few of its supporting performances and a couple of its numbers. Whoever thought the wan and willowy Nicole Kidman ("The Hours," "Australia") was a match up for "La Dolce Vita's" Anita Ekberg (Claudia in "Nine") should have his head examined. "Nine" is, of course, the Broadway musical version of Fellini's "8 1/2" which, despite the ill-conceived title, doesn't seem like a bad idea on the face of it, but a musical tends to be dependent on its music and too many of "Nine's" songs are limp affairs with uninspired lyrics. Before the film begins to get into them, it starts promisingly enough, with Guido explaining all the ways a film can be killed - writing it down for one thing - and with his confidante/costumer Lilli (Judi Dench, "Casino Royale," "Notes on a Scandal") explaining how simple directing actually is, a series of answering 'yes' or 'no' to questions from the crew. In the film's funniest scene, Guido heads to a press conference in his baby blue convertible, enters chewing gum and smoking his perpetual cigarette and dances around questions before performing a vanishing act. But Daniel Day Lewis's Italian accent isn't the most convincing (why hasn't an Italian been cast in this role? It was played by the Spanish Raul Julia and Antonio Banderas on stage and Javier Bardem was originally cast in the film...), especially when he sings. A singing, dancing Italian Daniel Day Lewis is not, I'm afraid. The film's first two numbers are utterly blah, then Penélope Cruz ("Vicky Cristina Barcelona," "Broken Embraces") puts her hoochie coochie on in a black lace corset on a couple of ropes. If Guido's mistress Carla is a neurotic temptress, his wife Luisa is a saint, beautifully played by Marion Cotillard ("La Vie en Rose," "Public Enemies") in a performance full of hope and hurt, the film's best. She even evokes Fellini's wife Giulietta Masina, but, although she has a lovely singing voice, she's saddled with one of the film's worst songs ('My Husband Makes Movies'). She does recall her first meeting with Guido, where she auditioned for him and swept him away, a scene that is repeated with great emotion and another actress (Martina Stella's ""L'ultimo bacio") Donatella) later in the film. A memory of a different kind comes to Guido after he appeals to a Cardinal who is visiting the same hotel - Saraghina (The Black-Eyed Peas' Fergie, "Poseidon," "Grindhouse") was the prostitute who lived on the beach ("Amarcord's" Volpina) in the town where Guido grew up and who inducted him into some of life's pleasures, bringing down the wrath of not only the Church, but Mamma (Sophia Loren, "Two Women," as lifeless as a mannequin rolled out on a two-wheeler). This memory gives way to the film's best musical number, "Be Italian," which Fergie belts out lustily (and bustily - the singer gained twenty pounds for the role) amid some nicely choreographed sand flinging. (The set for the musical numbers has been designed like a circus ring surrounded by Roman arches.) As if Guido didn't have enough women on his hands, along comes Stephanie (Kate Hudson, "Bride Wars") from that prior press conference with seduction on her mind. Hudson doesn't make much of the role, but she does get her 60's era GoGo girl on for "Cinema Italiano," proving she can shake her mane with the best of them. (Hair and makeup are a standout of "Nine," although costumes by Colleen Atwood ("Memoirs of a Geisha") trend toward the coarse.) As directed by Marshall, "Nine" mummifies many of its musical numbers (Judi Dench puts her French chanteuse on for "Folies Bergeres," but visually it's just a bunch of people standing in a line on the stage), many of which seem liked warmed over Fosse ("Be Italian" looks as if it wandered out of "Cabaret"). Cruz is sexy and amusing and Dench is witty and dry, but only Cotillard achieves anything like depth. Kidman is so horribly miscast it's hard to blame the actress - all one can concentrate on is the construction of the dress designed by Atwood to try to make her look like Ekberg (it fails). Day Lewis can be amusing, but in the end one doesn't care about him, his predicament or, most sadly, his art. One can mine "Nine" for a few pleasures, Cotillard's performance chief among them, but it will be mostly mining for coal, not gemstones.

This movie is the remake of the 1982 Broadway musical that, itself, is a remake the 1963 Federico Fellini’s masterpiece, “8 ½.” I didn’t get the idea of the play and, with Daniel Day-Louis as the lead, film auteur Guido Contini, I get the why of “Nine” even less. One of the many charms of the original “8 ½” is the duality of the Guido Anselmi character (Marcello Mastroianni). He is both a man, a filmmaker, who has hit a creative wall in his career, and he is the alter ego of filmmaker, Fellini. Without this connection, Day-Louis is unanchored and gives an unexpectedly wooden performance. Since, in “Nine,” Guido is the center of attention, the marvelous collection of femmes that surround are given short shrift. Some, though, overcome their near-cameo appearances. Penelope Cruz is, once again, marvelous, here playing Guido’s mistress, and gets the film’s best musical number – a sexy siren song. Stacy “Fergie” Ferguson, from the Black-eyed Peas, is next best with her voyeuristic song and dance. Marion Cotillard, as Guido’s patient wife, Luisa, does fine singing in her two tunes (all the rest just get one). The other costars include Judi Dench, Kate Hudson, Sophia Loren and Nicole Kidman, with all, except Kidman, doing good work. The former Mrs. Tom Cruise has, lately showing signs of losing her edge – watch “Australia” to see what I mean. Rob Marshall does not reprise his success with “Chicago” but “Nine” does have some good song and dance and not much else.