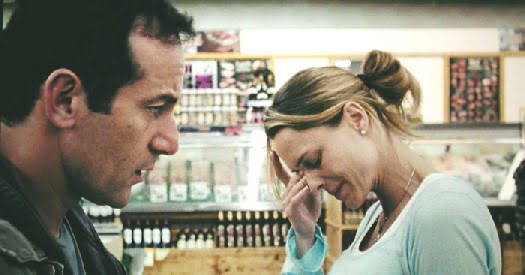 Filmmaker Rodrigo Garcia, in a series of single take moments, plumbs the individual experiences of nine women, each at a crossroad in life. The camera unflinchingly follows its subjects as each must cope with relationships both past and present in “Nine Lives.”

In nine single, uninterrupted takes writer/director Rodrigo Garcia drops us into the lives of nine different women who are all trying to come to grips with an important relationship. Daughters, mothers, fathers, former lovers and current spouses control the emotions of "Nine Lives." Garcia, who most people would be familiar with for his "Things You Can Tell Just by Looking at Her," continues to delve into the female psyche with characters who cross paths into less significant roles in each others' stories. A sextet of returning actors (Close, Brenneman, Hunter, Baker, Carrillo and Sandoval) join an extensive ensemble to create brief snatches of real life. Garcia's romantic entanglements generally are stronger than his familial complexities. Robin Wright Penn ("A Home at the End of the World") is excellent as a heavily pregnant wife whose life is thrown off its orbit when she runs into the former lover (Jason Isaacs, "Peter Pan") who obviously was her great passion. Damian returns as one half of a couple who is hosting close friends in their new home. His wife Lisa (Molly Parker, HBO's "Deadwood") is guardedly skeptical about her friend Sonia's (Holly Hunter, "Thirteen") choice of mate, and by the time the four have drunk a toast, she's proven right. Martin (Stephen Dillane, "King Arthur") goes out of his way to one-up a perceived betrayal by Sonia in an excruciatingly uncomfortable moment. Another is served up when Lisa attends the wake of a friend and is appalled to see the ex-wife of the suicide's husband in attendance. Lorna (Amy Brenneman, TV's "Judging Amy") makes an innocent show of caring for her deaf/mute ex Andrew's (William Fichtner, "Crash") loss, but in reality she glories in the sexual power she holds over him, a grasp that clearly drove the deceased to end her life. Sissy Spacek stars in the weakest of the romance snippets as a woman on the verge of cheating on her husband. Spacek's Ruth crosses paths with three other stories, two significantly. She's the mother of only child Samantha (Amanda Seyfried, "Mean Girls") who is pitted between parents who burden her with the health of their family. Dad (an almost unrecognizable Ian McShane of HBO's "Deadwood") is wheelchair bound with a debilitating disease and mom is worn down from years of care. Samantha has a flirtatious relationship with her father but is exasperated by her mom, fairly typical for a teenage girl. Garcia's writing and concept are intriguing here, but his blocking, with Samantha constantly walking back and forth between her mother in one room and her father in another, perhaps meant to evoke weariness instead becomes annoying. Ruth also witnesses the arrest of Sandra (Elpidia Carrillo, "A Day Without a Mexican"), the subject of Garcia's first segment about a female inmate who becomes hysterical when denied verbal access to her daughter during a monthly visit. Sandra's guard Ron (Miguel Sandoval, "Ballistic: Ecks vs. Sever") turns out to be the father of Holly (Lisa Gay Hamilton, "Beloved") a woman totally bound up in the childhood trauma he caused her. Hamilton is too mannered and fussy in her portrayal to make this segment work, but Garcia wraps it with a punch. Perhaps the most emotional ending is saved for the omnibus's last. Maggie (Glenn Close, "Heights") takes her much younger daughter Maria (Dakota Fanning, "The War of the Worlds") on her annual visit to the cemetery, which she turns into a picnic to keep her child amused. The over-protective mother is clearly coping with a heavy burden (like Ruth, she proclaims her exhaustion) that her buoyant daughter distracts her from. Only Maggie's story features no characters from another, nor does she appear in any of the other eight. Garcia has orchestrated some terrific performances in these single long takes and his work with cameraman Xavier Pérez Grobet ("The Woodsman") is so well choreographed one almost doesn't notice the lack of cuts. In one startling move, a 360 degree pan changes everything. Almost all of the stories end abruptly, almost as if the camera was turned off in the middle of a sentence or movement. When it's used initially in Sandra's segment, it seems awkward, jolting one out of the moment, but the device eventually adds to the genuine feeling of experiencing real slices of life - Garcia just plunks us into situations already in progress, then we orient ourselves and becomes flies on the wall. His writing here is sharp. 'Five minutes with you and I feel like my life's a figment of my imagination' - Diana (Wright Penn) sums up her turmoil with words as accurate as a surgeon's knife. The repetitions in 'Samantha,' some identical others paraphrased, form the seesaw of her parents that she keeps in balance. Even the use of a four-letter word contains a deeper meaning, a clue. While not every story works as well as others (Kathy Baker's Camille is the one I've neglected to mention. She's good, but hers is the least easy to categorize, a woman about to lose a breast to cancer who is angry at the world), the whole forms a rich experience. "Nine Lives" is like a concept album, where even the order of play affects the emotional outcome.

Nine Lives” is an academic exercise in filmmaking that is a hit or miss effort but has excellent pedigrees from its numerous femme stars. It takes place in nine chapters with each episode named after the central figure in each vignette – Sandra (Elpida Carrillo) is a prison inmate desperate to connect with her visiting young daughter; Diana (Robin Wright Pen), pregnant, is suddenly presented with a part of her past life that she thought long gone; Holly (Lisa Gay Hamilton) is poised to make her stepfather admit to the pain he caused her as a child; Sonia (Holly Hunter) is stunned by her boyfriend’s revelation of a secret to their closest friends; Samantha (Amanda Seyfried) is a teen caught in the middle of the rift between her parents; Lorna (Amy Brenneman) attends the funeral for her deaf ex-husband’s wife, a suicide victim; Ruth (Sissy Spacek) is conflicted by her decision to have an affair; Camille (Kathy Baker) is confronted by the specter of surgery on her once healthy body; and Maggie (Glenn Close) must finally face a life that has been overshadowed by her young daughter, Maria (Dakota Fanning). This is an ambitious work by writer/director Rodrigo Garcia and, on paper, may have seemed an intriguing prospect. But, I think it too ambitious a project that misfires more than it scores a hit on its targets. Several of the mini-stories do hit the mark, though. Pregnant Sandra’s chance encounter in a supermarket with her former lover (Jason Isaacs) is wrought with emotions and misgivings as the danger of old flames threaten to rekindle. Lorna’s story of a broken marriage threatens to open old wounds and passions. William Fichtner, as her deaf ex, Andrew, is one of the few male performers in the mini-plays to actually give depth to his character. Maggie’s melancholy tale takes place in a cemetery and her sense of loss comes across palpably. The rest of the tales tended to leave me cold and not really caring about the characters. Garcia and cinematographer Xavier Perez Grobet use the device of a single, unbroken camera take for each story. This is also a hit or miss proposition, as in Samantha’s story where the camera follows the girl back and forth, like a ping pong ball, between her parents and their ongoing duel for their daughter’s attention. Production design is spare and doesn’t command much notice. Despite the overwhelming femme and feminist overtones of “Nine Lives” I can’t really call it a “chick flick.” I don’t see the girls getting together for a night out at the movies and sitting through something that has such a narrow field of appeal. Film buffs may appreciate the experimental nature but even that group will provide sparse numbers at the box office. The stellar cast will have some draw, especially on home video. I think “Nine Lives” is aimed at femme, feminist film fanatics. I’m not one of them and