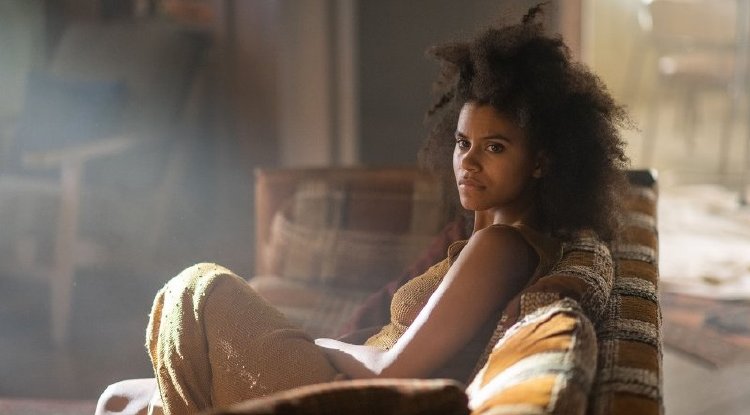 In the middle of nowhere sits a bungalow set off by a white picket fence where Will (Winston Duke, "Us") watches a stack of old TVs broadcasting the points of view of people he has chosen to be born on earth.  When his favorite, musical prodigy Amanda, shockingly ends her life, Will becomes The Interviewer of candidates who will either cease to exist if not chosen or forget their experience but remain themselves if they are selected in “Nine Days.”

Japanese Brazilian writer/director Edson Oda makes his feature debut contemplating human existence in a screenplay that was partially inspired by the suicide of his creative uncle.

Early festival reactions and promotional material hammered home the science-fiction and philosophical aspects of the film, every still photograph chosen highlighting the Utah desert location used for the exterior of Will’s house, so to finally experience "Nine Days" is to find a film very different from what I was expecting, one rooted in human emotion, nostalgia for older technology and hand crafted items where the person who will be most affected is The Interviewer himself.

Will’s only companion when he isn’t interviewing is Kyo (Benedict Wong, "Doctor Strange"), a man we will learn has never ‘lived’ who comes by to watch others do so with Will.  The two record what they see on VHS tapes, every life noted with the number of days lived.  Settling down for a major performance from Amanda, they are stunned as they watch her aim her car into a concrete bridge support, the TV going dark.  The next day, Anne (Perry Smith), Amanda’s first potential replacement, knocks on Will’s door.  ‘How old are you?’ he asks.  ‘Four,’ the middle-aged woman replies, ‘hours.’

The primary candidates will be the insecure, artistic Mike (David Rysdahl); the romantic Maria (Arianna Ortiz), the obsequious wise guy Alexander (Tony Hale, HBO's 'Veep') and the scheming and competitive Kane (Bill Skarsgård, "It").  Arriving late, the kind and curious Emma (Zazie Beetz, TV's 'Atlanta') starts off on the wrong foot with Will, but is championed by Kyo.  Will meets with each on a daily basis, one-on-one, presenting them with challenges.  On their first day, each is told to imagine that they are in a concentration camp with their young son who has tried to escape.  He has been put on a stool, a rope around his neck, the candidate ordered to pull out the stool or everyone will be killed.  Will demands ‘What would you do?’  Exercises like this are alternated with assignments to watch the lives unfolding in Will’s living room and write essays about their favorite or least favorite things in those lives.  Everyone’s answers are different, Kane obviously trying to game ‘the system,’ Emma thwarting Will’s agenda with honest ‘I don’t know’s.  The candidates never cross paths with anyone but Will and Kyo.

About half way through the nine days, we learn that elimination can come early.  After encouraging Mike to show him a page in his notebook he’d been hiding, Will marvels at the beautiful drawing of a beach, one which Mike professes to hate.  The next day Mike is told he is being eliminated, but that Will will endeavor to give him his one most anticipated experience before he disappears.  We see Will constructing a large wooden platform in his workshop along with Kyo.  Emma arrives to help.  Will’s unnerved, but Kyo enthusiastic as the young woman begins sanding wood.  Later, Kyo sneaks Emma in to watch from a hiding place.  Will has enabled Mike to experience his beach, complete with water and sand and a beautiful, projected horizon.  He comforts the man as he gradually ceases to exit.

As time marches on, we begin to realize that Will is focused on the negative, looking for ‘toughness’ in his candidates in order that they be able to endure life’s hardships.  He continues to obsess over Amanda’s death, considering it his own failure.  And we will begin to understand why and just why Will is now in the position he is in.

Duke is very good here, his downward spiral held in check with candidates who he struggles to appear even keeled with.  Every one of the actors makes a personality come alive, a person we can project into the living world, but Beetz expresses such a childlike sense of wonder balanced with keen insight she’s like some kind of ethereal spirit, her generous performance almost cradling Duke’s.  The production is unique, the harsh, flat, white landscape outside in stark contrast to the shadowy interiors of Will’s home, every room featuring dark furniture except for a kitchen out of the early 60’s.  We will see Will grant four final wishes, the first couple seeming like something from a Michel Gondry film.  The emotions in each are strong, but the last is a crescendo of embracing life that is so moving and so in tune with everything the filmmaker has expressed you may weep – I know I did.

With “Nine Days,” Oda hasn’t recreated the wheel.  We’ve had similarly themed movies, like Albert Brooks’ “Defending Your Life,” Koreeda’s “After Life” and even the recent Pixar animation “Soul.”  But Oda has succeeded in making one of the very best of them and done so with his own unique stamp.  I can’t wait to see what he does next.

Will (Winston Duke) spends his days watching the POV monitors of people living their daily lives. When one, Amanda (Lisa Starrett), dies in a terrible car accident, a new soul, her replacement, must be selected from five candidates. It is Will’s job to make the choice of life for just one in “Nine Days.”

Recommendation: if you are not interested in puzzles and prefer the straightforward super-hero action flicks instead, do not bother with “Nine Days.” However, if you like a film that makes you think and wonder about the story as it unfolds, then tyro writer-director Edson Oda’s supernatural-fantasy-procedural tale will interest you.

Will, we learn, is obsessed with the souls he selected for life and watches those lives unfold on a bank of TV sets, each the point of view of the soul he watches, As he observes his favorite, Amanda, he is shocked by her sudden death. He now has the task, even though emotionally devastated, to select a suitable replacement from the five candidates.
At this point, the story divides in two, with one part of Will’s obsession with Amanda, a gifted young woman, a concert violinist, who died too young. He needs to know the reason why she died, a problem sleeping or something else? The other part deals with the fantastical process of the soul selection.

As soon as Amanda dies, five people arrive, one at a time, to be interviewed by Will for the now open chance for life. He assigns them, each, the task of watching the POV lives on the monitors and take notes. He then interprets the responses and poses a life or death scenario and demands they tell him what choice they would make. Slowly, the candidates are whittled down until just one is left.

That description does not come close to explaining the nuance of originality of Oda’s story and his characters, particularly Will, a man of quiet countenance but with an excess of emotion. This shows in his obsession with Amanda, who was his greatest hope of creating a perfect life. His dilemma, by the way, is exacerbated by one of the candidates, Emma (Zazie Beetz), a true free spirit who Will knows is unique and special.

Each and every character in this nicely cast play is well-developed with Winston Duke’s Will the first among equals. The story of the birth of a soul is given a completely fresh approach that, to some, may seem religious, but to me is just a intelligent and intriguing story about how a life is selected.