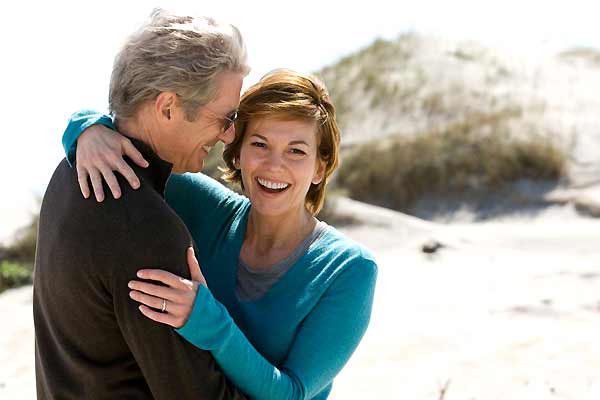 Separated mother of two Adrienne Willis (Diane Lane, "Unfaithful," "Untraceable") is expecting some alone time helping out best friend Jean (Viola Davis, "World Trade Center," "Disturbia") by keeping her North Carolina Outer Banks inn open for one last off season guest. But that guest, Dr. Paul Flanner (Richard Gere, "Unfaithful," "I'm Not There"), proves good looking and troubled and the arrival of a hurricane throws them together for some provocative "Nights in Rodanthe."

The Nicholas Sparks books adapted for the big screen are generally gooey, coastal romances served with a side of spirituality. After the awful "Message in a Bottle" then the better-than-it-should-have-been "A Walk to Remember," "The Notebook" was a surprising success, given some edge by the sexual heat generated by its leads. As adapted by Ann Peacock ("The Chronicles of Narnia: The Lion, the Witch and the Wardrobe") and John Romano ("The Third Miracle") and directed by George C. Wolfe (HBO's "Lackawanna Blues"), "Nights in Rodanthe" represents a return to the drawing board, a goopy, disjointed weepie elevated ever so slightly by the reteaming of "Unfaithful" costars Gere and Lane. Adrienne is introduced as a frazzled mom dealing with a rebellious teenage girl and a head-in-the-clouds son. As she's trying to get them out of the house with dad Jack (Christopher Meloni, TV's "Law & Order: Special Victims Unit"), he sideswipes her with a pleased pronouncement that he wants to come home. Adrienne commiserates with Jean via phone and it's clear Jean is as against the idea as daughter Amanda (Mae Whitman, TV's "Arrested Development") seemed for it. After Jean gives a rundown of the inn's quirks (hot water bubbles up eventually, kick the generator if it doesn't kick in) enter the moody Dr. Paul Flanner who says little except when he's outside passionately conversing on his cell phone. He surprises her, though, at dinner, when he picks up his dining room place setting to join Adrienne in the kitchen. The two begin to talk, but he learns more about her than she gets out of him. Intrigued, the next day she snoops a bit in his room as she cleans and hears about how he lost a local patient during a routine procedure from Dot (Becky Ann Baker, TV's "Freaks and Geeks," "Spider-Man 3") at the local grocery. where everyone's stocking up for the big storm. Of course, big storms mean big waves in Sparks-land and the two end up connecting big time. We know what Adrienne's problems are, so Flanner's background is filled in with a series of flashbacks awkwardly inserted into the current action. The operating room mishap is explained as a rare case of reaction to anesthesia that the good doctor tried everything to circumvent. However, his decision to send a nurse to deliver the news to Rodanthe local Robert Torrelson (Scott Glenn, "The Right Stuff," "The Bourne Ultimatum") put a wedge in his relationship with son Mark (James Franco, "Spider-Man 3," "Pineapple Express") who reacted by disappearing into the mountains of Peru to run a medical clinic. Adrienne confronts Flanner and gets him to open up emotionally, which he does by visiting Torrelson, where we must witness Glenn reciting a paean to his wife's beauty, even with an egg-sized cyst on her face, an odd sermon on the skin depth of beauty in a movie starring Gere and Lane. Flanner takes off for Peru and the two conduct a romance via letter until he can return. Despite Lane's natural charm and her chemistry with Gere, there is little to recommend about "Nights in Rodanthe." The stilted, multi-story wooden house featured as the inn is dandied up by William G. Davis's ("The Secret Life of Bees") art direction and James Edward Ferrell Jr.'s ("The Secret Life of Bees") set decoration as a cross between African American boho chic and a funky old home (the set piece house being another of Sparks's touchstones). It's a good location for romance, but when Flanner predicts native horses will arrive despite the rarity of them appearing that far south, you just know Lane will dance among them deliriously on the beach and it's just plain overkill. Flanner's tortured speech about only ever wanting to be a good doctor is matched the next by Adrienne's parallel about motherhood and it is nothing but a screenplay exercise in balance and a dead end. A ferocious storm comes in and all is fine the next day after Adrienne sweeps up the floor of the inn's living room and Wolfe's decision to allow Gere to bellow 'Adrienne' against the howling wind invites a fit of giggles (if not actual call responses of "Rocky!"). Rodanthe also responds 24 hours later with a post storm celebration complete with village-wide food and entertainment as a backdrop for the romance to bloom. Only fans of Harlequin romances won't be rolling their eyeballs. The entire film is constructed of individual scenes that feel as if they've been hammered together without being measured like the late breaking story twist where Amanda's reaction to her mother flip flops without any indication that she knows what's happened. The only surprising thing about "Nights in Rodanthe" is that the filmmakers actually think today's audiences will buy this sap, especially in its jury-rigged state. Lane and Gere deserve better.