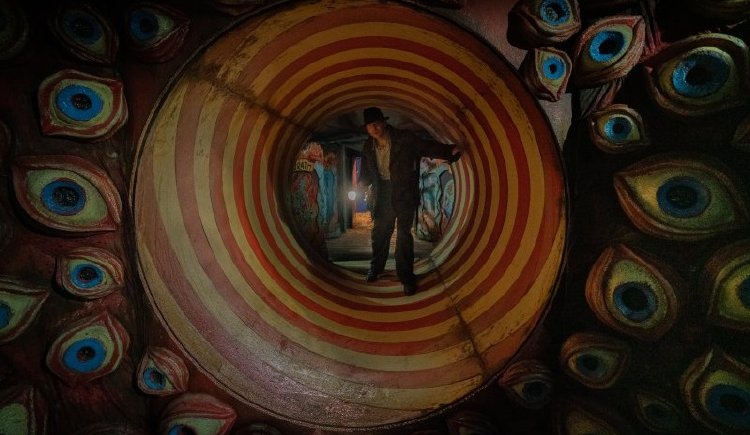 After rolling his father’s body into a hole in the floor, Stanton Carlisle (Bradley Cooper) sets their rural hilltop home ablaze and boards a bus.  At one stop, he follows a dwarf to carnival grounds where Clem Hoatley (Willem Dafoe) is quick to use him as cheap labor and where mentalist Zeena (Toni Collette) is just quick to use him.  But Stan knows how to use people too, and after endearing himself to Zeena and her husband Pete (David Strathairn), whose numbered verbal code he’d turn into an act with the carnival’s most innocent, Molly (Rooney Mara), at a swank Buffalo nightclub, he’ll meet his match but fail to recognize it in “Nightmare Alley.”

Cowriter (with Kim Morgan)/director Guillermo del Toro has assembled a starry cast for his remake of Edmund Goulding’s 1947 noir (from William Lindsay Gresham’s 1946 novel), but the film’s real star is its production design, Tamara Deverell and supervising art director Brandt Gordon creating a hauntingly dark vintage carnival before segueing to the chic art deco of Carlisle’s Buffalo hotel suite and nightclub and the burled woods of psychologist Dr. Lilith Ritter (Cate Blanchett) snow obscured fishbowl of an office.  But while Blanchett simmers and purrs as this film’s femme fatale, one wonders if del Toro followed Werner Herzog’s “Heart of Glass” playbook and hypnotized the rest of his cast.  The film is strangely enervated, Cooper’s con man lacking in personality, Mara’s ethereal quality brought down to earth, Collette and Strathairn failing to move us as the way Joan Blondell and Ian Keith did so memorably.  Even Tim Blake Nelson as the carny manager who provides the climactic final twist of the knife seems to be going through the motions here.  In fact, the emphasis on the film’s design and its subject matter made me think of Tim Burton, wondering how a remake starring Johnny Depp would have fared in his hands thirty years ago.

Stan’s introduction to the carnival is through the geek show he wonders into, customers coughing up a quarter to watch a horribly abused alcoholic bite the head off a chicken.  Clem is quick to tell him how to groom a geek and asks Stan’s assistance when the crazed man escapes.  At first, Stan seems both helpful and empathetic, bearing no ill will to the man he finds cowering in, appropriately, the House of Damnation.  Clem’s collection also includes freaks of another kind, mostly abnormal fetuses pickled in the wood alcohol in keeps in a red box, right beside the blue one holding the type for consumption.  Stan, who ‘never drinks,’ has no qualms about getting hooch for Pete and while Zeena’s got her eye on him, his eye’s turned towards Molly, the carnival’s ‘electrocution’ girl, a sweetheart protected by strongman Bruno (Ron Perlman).  Two years later, Stan and Molly are living the high life in Buffalo performing Zeena and Pete’s old act.

Molly, berated by Stan when she steps on a cue, misses her old friends, but Stan’s head is turned by the wealthy who attend their shows.  When he’s able to outsmart a glamorous audience member who thinks she’s got him figured, Stan believes her story about ‘checking him out’ for one of her clients and throws his lot in with her.  Dr. Ritter has an office full of recordings of her sessions, a real goldmine if Stan can get his hands on them, and soon he’s targeting the inordinately wealthy Ezra Grindle (Richard Jenkins) with the one thing Pete adamantly opposed, a ‘spook show.’

There’s more than a whiff of George Hodel, the wealthy Hollywood doctor long suspected of the Black Dahlia murder, in Ezra Grindle and Jenkins and ‘Mindhunter’s’ Holt McCallany as his goon Anderson emit a dangerous vibe, del Toro’s film most successful in setting up Carlisle’s trap.  Everything which follows is either excessive or inevitable.

The 2021 “Nightmare Alley” is absolutely stunning to look at, but the 1947 version packs more of an emotional punch.