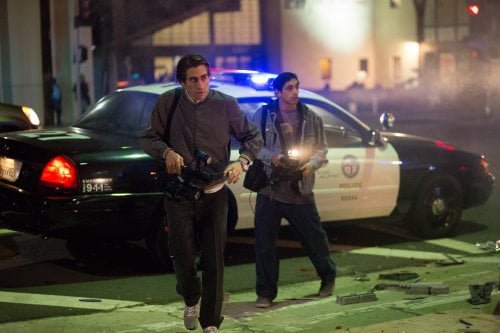 Louis Bloom (Jake Gyllenhaal, "Prisoners") is trying to self help himself out of financial desperation in L.A. when he falls upon something he thinks he will love - capturing video violence for exploitative news broadcasts. It doesn't take long for us to realize Lou's a sociopath and before his chief competitor knows what's hit him, Lou's become L.A.'s most successful "Nightcrawler."

Writer/director Dan Gilroy (writer "The Fall," "The Bourne Legacy") goes for the jugular in his insanely entertaining, disturbing indictment of the media from its insensitivity towards victims to far darker charges. And that's only "Nightcrawler's" surface agenda, as Gilroy digs deeper into the fear mongering that allows an entire citizenry to be manipulated. Jake Gyllenhaal is scary good in the role, the irises of his eyes surrounded by white, unblinking in his singular focus to succeed. After pawning his racing bike for a camera and police scanner, Lou's brazenness allows him to make a sale on his first attempt, getting right into paramedics' work on a dying car hijacking victim. He takes his tape and waltzes into KWLA where he's sent back to the editing room to pitch to graveyard shift news director Nina Romina (Rene Russo, "Thor: The Dark World"). His irate competitor Joe Loder's (Bill Paxton, "Edge of Tomorrow") already made the sale, but Nina's clearly excited by the gory close up Lou's gotten on his amateur effort, so she uses both. Lou finds himself being beaten to crime scenes, so he hires a homeless man, Rick (Riz Ahmed, "Four Lions," "The Reluctant Fundamentalist"), to handle navigation as he speeds through city streets. Soon he's made enough sales to upgrade to a flashy red Challenger and spar his way into an exclusive deal with Nina that reverses the balance of power as news assignment editor Frank Kruse (Kevin Rahm, AMC's 'Mad Men') looks on in horror. Gyllenhaal employs a mixture of naivety, obsequiousness and corporate slogan-speak that masks the killer instinct only Rick and Frank recognize. When he literally and figuratively gets blood on his hands, a savvy detective seems powerless to act, so calculated are his actions. He's made Lou such an utter moral vacuum his chutzpa sets one to laughing and cringing simultaneously. Also deliciously good is Russo whose face flushes with sexual arousal whenever she's thrown a ratings bone. Her incisive instruction as to what sells ('A car jacking in Compton? Now that isn't news...') would be great satire if it wasn't so on target. Gilroy's audacious script is a mashup of genres and he's directed his film like "Drive" by way of "Network," violent noir neon action mixed with sharp social commentary. Cinematographer Robert Elswit's ("There Will Be Blood," "The Town") use of mixed media (super 35 for daytime, digital for night) employs the best qualities of each, rich night scenes giving way to grainy video POVs. "Nightcrawler" uses the media as an example of the greed that currently fuels the American dream, catapulting sociopaths into positions of power. With his committed star, Gilroy's fashioned an insane and thought provoking thrillers. Grade: