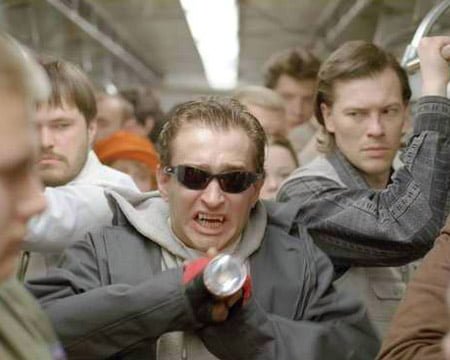 'It is easier to extinguish the light within oneself than battle the Darkness.' - Zavulon Anton Gorodetsky (Konstantin Khabensky) pays a visit to a black arts practitioner (Rimma Markova) in order to get his wife and son back, but they are interrupted by a team of 'Lights' whose descent upon the dark witch is witnessed by her shocked client. Anton's ability to see these 'Others' identifies him as one of their own and so, despite his recent questionable choice, he is recruited to join their centuries-old "Night Watch."

Cowriter (with Laeta Kalogridis, "Alexander")/director Timur Bekmambetov made Russian cinema history in 2004 with his film becoming the all time box office champ as well as his country's first blockbuster and entry for the 2005 Foreign Language Oscar. But although "Night Watch" wields startling visuals that look like they've come from the mixed imaginations of Jean-Pierre Jeunet ("Amelie") and Jan Svankmajer ("Little Otik"), the story, always intended as a trilogy, resembles a simplistic "Lord of the Rings" crossed with "Blade" by way of the Bible. In a dark and ancient time the lord of light, Geser (Vladimir Menshov), battled the lord of dark, Zavulon (Viktor Verzhbitsky), settling with an uneasy truce that is still enforced in 1992. Legend has it that a vortex will herald the presence of a virgin whose arrival will signal a new battle between light and dark. The outcome will be decided by the path a young 'Other' decides upon between the two. Anton's first mission is to thwart the 'call' of the vampiress Larisa (Anna Dubrovskaya), who is trying to lure a young boy, Yegor (Dmitry Martynov), to drink her blood But in trying to stop Larisa he's engaged in battle by her mate Andrei (Ilya Lagutenko), who he kills while suffering severe injury himself. Zavulon, decrees that the killing of a dark other means the end of the truce, but Geser resists, until, that is, meteorologists forecast tornados and a whirlpool of crows appears over a Moscow apartment building. "Night Watch" is indeed, a cool looking film, from Anton's Bono shades to flipbook animations and wild chase stunts. The well-imagined medieval opener features a 'truce bearer,' a human whose ears receive the whispered pact between Good and Evil only to age into dust before our eyes. The witch's apartment, where we meet Anton, is filled with depraved tsotchkes, like a spider doll right out of Sid of "Toy Story's" backyard. The Lights are not only vampires-on-the-edge themselves, but shape shifters, such as the owl, who becomes Olga, a sorceress (Galina Tyunina), or Tigercub and Bear, Others left to guard Yegor after his mother (Mariya Mironova) leaves for work. But despite flashy editing (Dmitri Kiselyov), camera work (Sergei Trofimov) and effects (Peter Gorshenin, Vladimir Leschinski), "Night Watch" only seems fresher than it otherwise might because of the novelty of its Russian production. Beginning with the source material, a trilogy of novels by Sergei Lukyanenko whose titles - "Night Watch," "Day Watch" and "Dusk Watch" - sound like a certain George Romero trilogy - this sci-fi fantasy film trots out one genre cliche after another - Light vs. dark, bad guys into rock music and video games, a father and son on opposite sides of the divide. Still, there is pleasure to be found in the details (the cause of the threat within 'the gloom,' 'Buffy' meeting Dracula on TV, Moscow's aging power plants supplying Light), the film is assured in where it wants to go and Bekmambetov makes the journey crackle. "Night Watch" is a grungy, flashy looking film that should please genre fans, but on the whole it's all rather predictable. The truest test - whether it inspires a desire for its sequels - only attains a half-hearted passing grade.