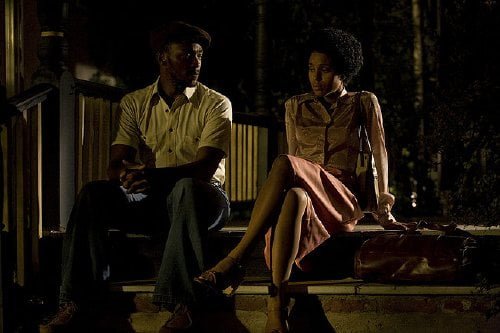 Philadelphia, 1976. After four years away without word, Marcus Washington (Anthony Mackie, "Notorious," "The Hurt Locker") returns home to find a note that his father's in the dining room. The reverend is being waked and Marcus's brother Bostic (Tariq Trotter) has already found a buyer for the house. In general, Marcus isn't welcomed, suspected of having snitched on a fellow Black Panther member who shot a cop, but that man's widow, Patricia Wilson (Kerry Washington, "For Colored Girls"), offers him a place to stay in "Night Catches Us."

Writer/director Tanya Hamilton makes her debut with this quiet film about racial and political tensions in a Philadelphia neighborhood. The film's hook is its unique look at the Black Panther movement, one that reflects on where former comrades have gone and how they've been split apart. The film's major failing is that its only connection to the past that drives the movie's present is that it's presented by generic news footage rather than the direct back stories of its characters. One exception is a parallel Hamilton's created between Jimmy (Amari Cheatom), Patricia's cousin, and Neil (Tariq Rasheed), the Panther whose shadow colors the film. Strong leads, a grounding sense of time and place and a terrific jazzy R&B score by The Roots make this work more than not. Patricia's older lawyer lover presents her with a leather case, but frowns upon her defending her cousin Jimmy, picked up for verbal assault on a police officer. Jimmy's a scrap metal seller who pays a couple of kids, including Patricia's daughter Iris (Jamara Griffin), for their help. Iris is becoming more and more intrigued by her past history. She knows her father was killed in the living room of her sprawling house, a home Patricia opens to many in need, and when she sees Marcus on the street, she recognizes him from old photographs. When he visits 'Patty,' as she was once called, her lawyer man goes on higher alert. The film has a generational pull, Iris being a strong connection between past and present, especially with Marcus. He's ordered away by local bar owner Dwayne 'DoRight' Miller (Jamie Hector, HBO's 'The Wire,' "Max Payne"), and finds 'snitch' painted on the side of his daddy's old Cadillac, but he's also pulled in by Patty and a protective feeling for the younger generation. Jimmy's being harassed by racist cops and Marcus can see him potentially following in Neil's footsteps. An old panther comic found by Iris, which comes to life in simple pen and ink animation, isn't what it first appears when found in Jimmy's hands by Marcus. In another creative way of connecting the present to the past, we see Iris pulling away peeling wallpaper to reveal Panther scrawlings on the walls beneath. Still, a bit more history on the Black Panthers would be in order for Hamilton's film to leap out of its niche. Anthony Mackie is a strong and mysterious presence until the film's climax, in which he reveals a family secret, and Hamilton's choice to keep the proceedings restrained is a good one. He's nicely supported by Washington and young Griffin. Amari Cheatom is sympathetic as Jimmy. Two beautiful old Philadelphia homes, one neatly tended, the other overgrown with old plantings, plus a bar and some street scenes are all Hamilton needs to establish a strong sense of place. The film is nicely shot by David Tumblety ("Sweet Land," "Today's Special"), particularly an outdoor nighttime conversation between the two leads. "Night Catches Us" is a small film, one that could as easily play on the tube as the big screen, that marks a solid debut for Hamilton. If only she'd brought the history so integral to her characters into sharper focus.