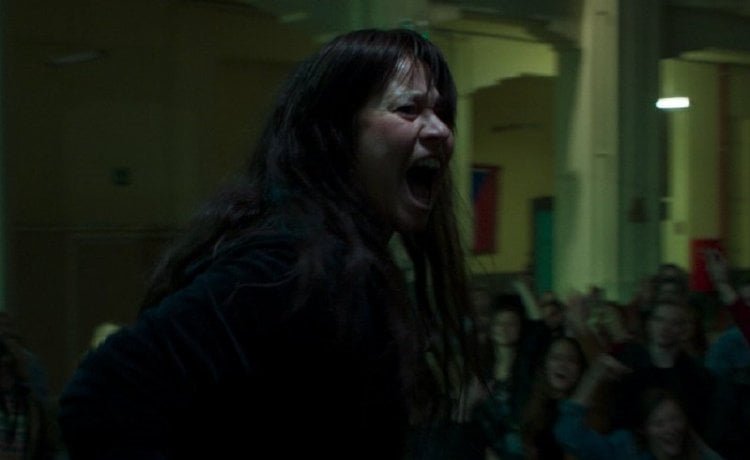 Having lost her looks and custody of her son years ago, Christa Päffgen (Trine Dyrholm, "Love Is All You Need") creates raw and gloomy music unrecognized in Manchester. A new manager, Richard (John Gordon Sinclair, Gregory of "Gregory's Girl"), convinces the artist known for her days with The Velvet Underground and Andy Warhol's Factory to go on tour in "Nico, 1988."

Heroin chic was a term concocted in the 90's to describe the then trend of pale, gaunt, waifish looking models, but the 1960's birthed the true heroin chic of such icons as Rolling Stones paramours Marianne Faithfull and Anita Pallenberg and Andy Warhol's Edie Sedgwick and Nico, the latter of whom he famously paired with The Velvet Underground. These women were more than chic - they had mystique - and writer/director Susanna Nicchiarelli's star Trine Dyrholm envelopes herself in it in a stunning performance that is one of the best of the year. Nicchiarelli's approach is not the typical biopic as she ignores Nico's many years making films with the likes of Philippe Garrel in the 70's, instead concentrating on the music that would go on to influence such Goth bands as Siouxsie and the Banshees and Nico's desire to repair her fractured relationship with her son Ari (Sandor Funtek), brought up by his paternal grandparents due to her untethered lifestyle. (French actor Alain Delon, never mentioned here, denied paternity although his parents did indeed bring up Nico's child.) Although the film is titled "1988," the year Nico died while riding a bike on Ibiza, the film begins in 1986 as Nico suffers through a radio interview in Manchester. The DJ wants to talk about her storied past while she wants to talk about her current music. She replies to his pride in her having chosen Manchester by saying it reminds her of Berlin in ruins after the war. Richard apologizes and ferries her to look at new living quarters. She sequesters herself in the bathroom, recording groaning pipes with her ever present tape unit and shooting up. (This sequences presents Nico as a German sensitive to Jews (both Richard and her new landlord), yet Nico reportedly believed in her Aryan superiority.) The bulk of the film is given over to Nico's tour of Eastern Europe, one which begins with her cursing out her guitar player and audience, finds her singing for her supper ('Nature Boy') at a seaside resort and climaxes with a mind-blowing performance of 'My Heart Is Empty' in Prague. It's a ramshackle tour with a band made up of one great violinist, Sylvia (Anamaria Marinca, "4 Months, 3 Weeks and 2 Days"), and a bunch of amateur junkies. Nico doesn't remember Richard's partner Laura's (Karina Fernandez, "Happy-Go-Lucky") name until she's been gone for months, Laura having recognized his infatuation did not rest with her. Dyrholm finds Nico's center by concurrently repelling and compelling, her love for Ari genuine even as she puts her junkie son in harm's way, verbalizing total disdain for her audience before delivering her most dazzling performance, letting a would be lover offer up his heart then casually dropping a bombshell. Her rejection of her past is her stand as her own woman and she is uncompromising. She is also vulnerable and charming, both qualities seen in her gratitude for a simple spaghetti dinner, her voraciousness a response to wartime starvation. Gordon Sinclair uses longing as an undercurrent to his performance, his surface care always evident (it is Richard who guides Nico into clean living and a fresh start). Nicchiarelli uses an Ibiza wraparound device without spelling out Nico's demise. The past is presented with archival footage effectively used as memory fragments commenting upon the present, just as the soundtrack ranges throughout Nico's career. Perhaps Nicchiarelli's greatest achievement is that her film can be enjoyed by both hard core fans and neophytes. If you walk into "Nico, 1988" knowing nothing about Christa Päffgen, the movie may inspire you to find out more. Grade: