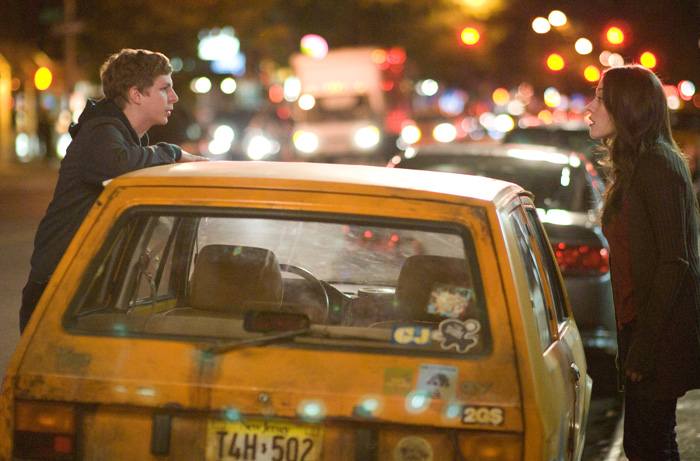 One month after girlfriend Tris (Alexis Dziena, "Broken Flowers," "Fool's Gold") dumped him, Nick (Michael Cera, "Superbad," "Juno") is still moping and cutting new editions of his epic series of breakup mix CDs, but gay bandmates Thom (Aaron Yoo, "Disturbia," "21") and Dev (Rafi Gavron, "Breaking and Entering") are determined to get him out of his funk. The newly named Jerk Offs have a gig at Arlene's Grocery and the legendary Where's Fluffy have announced a show somewhere in the five boroughs that same night. Unfortunately, Tris shows up at the gig, but so has a classmate of hers and when Tris needles Nora (Kat Dennings, "Charlie Bartlett," "The House Bunny"), Nora, who has been admiring Nick through his CDs, chances upon him to borrow as a boyfriend. After a crazy all-nighter in the city, the two just may make beautiful music together in "Nick and Nora's Infinite Playlist."

"Raising Victor Vargas" director Peter Sollett dives into a different New York City teenage lifestyle, that of music loving 'bridge-and-tunnel' kids, with equally sweet if more mainstream results. Keeping things bubbling brightly, Lorene Scafaria's adaptation of the novel by Rachel Cohn and David Levithan peoples Manhattan's night life with bold supporting players that enrich the main story line. "Nick and Nora" should prove a breakout for both lead Dennings and Ari Graynor ("Mystic River," "An American Crime") who bears the load of the film's physical and gross out comedy as Nora's thoroughly drunk yet endearing best friend Caroline (who may be a tip of the hat to the boozing Nick and Nora Charles of "The Thin Man" series). Tris is the lead 'mean girl' at Sacred Heart, but she bears a grudge against Nora because of Nora's famous father. It's purely coincidence that Nora hits on Nick after Tris shows off new college man Gary (Zachary Booth, TV's "Damages"), but when Caroline, who promised Nora earlier not to get drunk shows up completely pickled before the night's hardly begun, Nick offers to help drive her home. Tris tries to wedge her way in, but Nora firmly keeps her out and the enterprising Thom and Dev (and Dev's pickup Lethario, "Jonathan Bradford Wright") take things further by telling Nick to keep on Where's Fluffly's trail while they drop Caroline off with the band van. Things don't start off well as Nick keeps bemoaning the loss of Tris and Nora exerts her more prickly nature, but when they learn that Thom and Dev lost Caroline downtown, the group is pulled together with the mission of finding her. Meanwhile Caroline, who awoke to hear innocent but alarming talk and escaped what she believed was a kidnapping, stumbles from one adventure to another with her beloved wad of chewing gum (which has its own adventures). There is a split when Nora runs into ex-boyfriend Tal (Jay Baruchel, "Tropic Thunder") and inexplicably stays and Nick returns to his yellow Yugo (mistaken for a cab throughout) to find Tris atop his hood, but that 'meant-for-each-other' pull eventually exerts itself. Cera keeps his quiet, sweet guy persona in spin, his bass playing, musical mixing talents providing the added sex appeal, but it is a bit of a stretch to think killer ego Tris would have fallen for him. As Nora, Kat Dennings is another matter entirely, a boho type with intelligence and her own style. Graynor is outrageously funny, maintaining appeal even after her own brand of "Trainspotting's" toilet bowl scene. The film's best moment, where she sweetly seduces a turkey sandwich away from a taciturn fast food worker on break (Kevin Corrigan, "Walking and Talking," "Superbad") belongs to her. Aaron Yoo has been notable in every role he's played and continues his streak here with his amiable and supportive buddy while Rafi Gavron gives their queercore band, ever in search of the right name, its flavor. Baruchel nails sleazy suck up Tal and Wright carves himself a bit of mystery out of an eye candy role. Sollett makes characters out of Caroline's gum and Nick's Yugo and the tour of New York's hippest cult nightspots provides a fresh take on the city (with a special surprise when Nick learns who Nora's famous dad is). Yes, the film falls into the 'instant soundtrack' pitfall, with cuts from bands from Bishop Allen (who also appear) to current indie darlings Vampire Weekend, but the music is integral to the film's plot and so feels integral to the landscape rather than a sales tool.