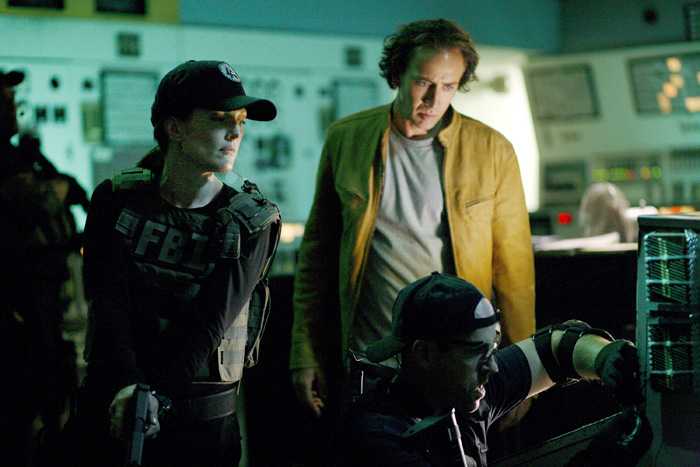 Cris Johnson (Nicolas Cage) is known only by his stage name, Frank Cadillac. He is a low-level Las Vegas magician but has a special talent: he can see two minutes into the future. This “gift” allows Cris to do his magic and, to supplement his meager income, to win at the black jack tables. He comes under the scrutiny of FBI Special Agent Callie Ferris (Julianne Moore) who wants to enlist Cris’s psychic powers to find a missing nuclear bomb in “Next.”

Cris Johnson (Nicolas Cage, "Ghost Rider") calls himself Frank Cadillac for his Las Vegas magician's show where he cloaks a genuinely freaky talent with $50 tricks to reassure his audiences, but he has drawn the attention of more that the pit bosses who suss out the winning streaks that enable Cris to supplement his show biz income. F.B.I. agent Callie Ferris (Julianne Moore, "The Forgotten," "Children of Men") wants to use Johnson's ability to pinpoint a rogue nuclear weapon. For a span of two minutes into the future, Cris can see what will happen "Next." For the longest time, Cage's name above a film's title ensured either quirk or quality, if not both, but lately the Oscar winning actor's been turning in a string of stinkers. This hackneyed sci-fi romance actioner was adapted from a short story by Philip K. Dick by an assemblage of screenwriters who do not even attempt to make any sense out of it. The plot is so poorly constructed that by the time the cliched climax smacks us upside the head it's almost amusing to see how utterly had we've been. And yet strangely, "Next" can't be totally written off because Cage is actually good in this role and he and Jessica Biel ("The Illusionist") have the type of chemistry that make the romance worth rooting for. When Cris realizes he's about to be pulled from the 21 table, he makes haste (in a surprisingly well choreographed bit that recalls the opening of the Atlantic City-set "Snake Eyes") to cash out his chips, but it is his misfortune to witness a double murder holdup at the counter before it happens. His disarming of the perp is misconstrued by the authorities, but not by Ferris, who uses the surveillance video of the event to convince her superiors that Johnson's gift can be used. Of course, the guy who we just witnessed perform a heroic act will run from helping the Feds because, if he didn't, there wouldn't be a movie. Cris is more involved with trying to find the woman he has seen in his future because she is the only thing he's ever well past the next two minutes. When he finds Liz, he uses his gift to try several different pickup lines until he finds the one that sticks. Cris insinuates himself into Liz's plans, making a convenient getaway in the process, but the Feds follow and use his new lover to get to him. Cage, sporting Bohemian hair and using his soulful eyes to maximum effect, immediately engages with his narrated self-deprecating back story playing over his purposefully second rate, yet charmingly confident, stage show. When Liz finally walks into the diner where he habitually waits for her, he shows such palpable longing it is a wonder it takes so many tries to win her over. And once he does, Biel's initial suspicion is prettily transformed into falling head over heels. The two swoon together. They're the only reason to watch this silly movie. The usually reliable Moore looks right firing a weapon, but just cannot sock across the hard-assed badness inherent to her character. Director Lee Tamahori ("Once Were Warriors," "Die Another Day") stages the action well. Besides that early mazelike escape, there's a great bit where a car outraces a train crossing. A later search, where Cage splits into multiple incarnations of himself in order to locate the bad guy ("The Pianist's" Thomas Kretschmann), takes things too far, though, and the special effects are less than special. Tamahori also makes great use of Grand Canyon locations. Too bad he couldn't tell a cohesive story.

The clairvoyant magician has kept his talent a secret since, as child, he was forced to undergo cruel experiments by curious government doctors and scientists. He changed his identity to keep hidden from his former torturers until Agent Ferris comes on the scene. He eludes the FBI but does not know that he is also being hunted by the terrorists possessing the A-bomb. It becomes a cat and mouse game when the manhunt heats up. Meanwhile, Cris has had a psychic vision very different from his normal two-minute look into the future. For the first time, he sees farther into the yet to come and the subject of the vision is a beautiful young woman, Liz (Jessica Biel), that he feels he is destined to meet. His clairvoyance shows Cris that she will appear, at some point, at a local restaurant so he spends each morning at the eatery waiting for his vision come true. When Liz finally does show up, he uses his gift to figure out how best to meet her. Soon, they become smitten with each other and love springs eternal. These two story lines would appear to be heading in different directions but the screenplay, by Paul Bernbaum, Gary Goldman and Jonathan Hensleigh adapted from a Philip K. Dick short story, merges them together in an imaginative, keep-you-guessing way. It plays around with Cris’s psychic gift, making his destiny to be with Liz the reason why that vision breaks the two-minute rule presented in the beginning. It is a bit of sleight of hand but it works. I have been disappointed by a number of Nic Cage’s film choices since his Oscar grabbing performance in Leaving Las Vegas.” I won’t say he is back in form in Next,” but some of his past screen chemistry seems to have seeped back into his acting. His Cris Johnson is a likable guy who wants to be left alone with his psychic abilities and small time magic. It helps the film that there is a good deal of onscreen attraction with his costar, Jessica Biel. Biel is a sweet presence as the lovely Liz and the romance between her and Cris is nicely told. The other part of the story, about terrorists, the bomb and the frantic hunt to find them, is routine action fare with Julliane Moore doing a rote job as Agent Ferris. This part of “Next” is merely routine action fare. The clock is ticking as Callie will go to any lengths, including a “Clockwork Orange” style torture of Cris, to find the terrorists possessing the dreaded bomb. The terrorists, though, are little more than two-dimensional bad guys with Thomas Kretschmann (“The Pianist,” “Downfall”) leading the generic band of killers. It is only when the two story paths meet does the action portion garner some life. Next” is a slickly produced supernatural thriller that uses solid camera work, by David Tattersall, and nifty special effects to have fun with Cris’s ability to see into the future. This is where the film is most clever and satisfying. The conventional thriller part, the hunt for the baddies and the bomb, is less enthralling than virtually any episode of “24.” The warmer weather movie onslaught will be upon us soon, what with “Spider-Man 3” opening the gates in a week or two. Therefore, if you are looking for an interesting, imaginative movie diversion before the summer blockbuster flood from Hollywood, you might just want to check out “Next.”