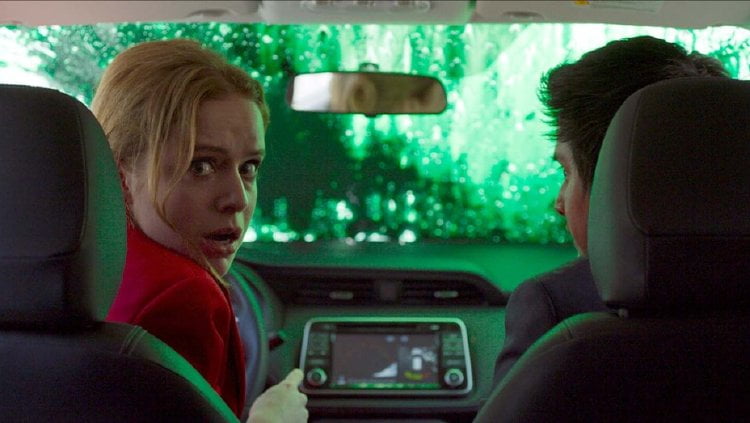 Wedding guests gather at a wealthy Mexican home as rioting lower classes spread city wide.  When a former servant arrives at the gate seeking help, he’s passed off to one family member after another until the bride agrees to help him, driving out into the chaos.  Revolutionaries scale the walls into the wedding reception, aided from the inside.  Everyone will awaken to a “New Order.”

Writer/director Michel Franco’s (“After Lucia”) dystopian tale about an upended class revolution is a harrowing and brutal thriller with a very bleak outlook but very effective execution.  The film is steeped in realism, yet given an artistic sheen with symbolism, like the prominent use of the colors of the Mexican flag where green stands for hope, white purity and red the spilled blood of those who fought for independence.  The timing of its release couldn’t be more relevant.

The opening credit sequence is arty indeed, with green paint mixed into the water running down a nude woman on marble stairs.  We are then thrust into a Mexico City in a state of extreme unrest where that green paint is being splashed about by the brown skinned have-nots.  We witness a hospital ejecting patients as it triages the wounded, hear gunfire and see piles of bodies and baseball bats.  Helicopters hover overhead and the streets are becoming impassable.  Rebecca (Lisa Owen, “Museo”), the mother of the bride, frets that a prominent judge is not there yet while other guests arrive buzzing about airport chaos, many bearing paint stains.  When she finds water in a bathroom running green, she instructs head housekeeper Marta (Mónica Del Carmen, “Babel”) to inspect their guests’ belongings.

We’ll learn a lot about the Novello family by the way they treat Rolando (Eligio Melendez), a now retired servant of many years seen earlier trying to access that hospital, his elderly wife needing emergency surgery.  Rebecca gives him far less money than he needs (but more than she asked her husband Ivan (Roberto Medina) for) and tells him to return the next day, something they both know is impossible.  The bride, Marianne (Naian González Norvind, “South Mountain”), steps in, demanding her fiancé Alan (Dario Yazbek) and brother Daniel (Diego Boneta) procure the remainder (mom’s been stashing fat wedding gift envelopes in the family safe), but when Daniel arrives at the gate he tells the poor man to get out of his house.  Learning what happened, Marianne, clad in a bright red pant suit, grabs Marta’s son Cristian (Fernando Cuautle), who knows where Rolando lives, and drives off with him planning on using her credit card to pay for Elsa’s surgery.  Meanwhile, back at the house where Rebecca and Ivan curry favor with the well-connected Victor (Enrique Singer), armed revolutionaries are let in by the gatekeeper and scale the walls.  Marta calls Cristian telling him not to come back.  She will walk out of carnage and head for her humble home on foot.

Marta will find her son at home, but learn that Marianne was taken by the military, revolutionaries ransoming the rich back to their own.  She and others of her class are kept in deplorable conditions, the women raped.  But Marta and Cristian’s circumstances are hardly better, the two scapegoated by the surviving Novellos as complicit in Marianne’s kidnapping.  The white and wealthy take control of the military, the Novellos' VIP guest chief among them.  The film’s final scene is chilling.

With a very compact running time, Franco impressively paints a city under siege, then flips the chaos into control of the most horrifying nature, a dehumanizing authoritarianism.  “New Order” is shocking, but it delivers an effective warning.

Mexico City sometime in the near future. A wealthy family’s wedding is interrupted when armed rioters invade and disrupt the party. This is just the start of the city’s and the nation’s poor rising up against the privileged few and the beginning of a “New Order.”

I had a strong sense of the writings of Karl Marx and his prophetic “Workers of the world unite! You have nothing to lose but your chains!” as I watched this dire drama, possibly of what is to come. Mexico City is the location for this prophesy of doom but the growing disparity between the very rich and the very poor is a worldwide problem brought to vivid light in “New Order.”

This “what if,,,” story centers on Marianne’s (Naian Gonzalez Norvind) wedding day. The blissful event is being held in the fancy family compound. But trouble and violence brew outside their door and the gun-toting infiltrators appear. At the same time, a former, loyal employee, Rolando (Eligio Melendez), shows up to ask for money to get his wife an operation. How the family handles the latter problem overshadows what is to come.

What transpires after this seemingly routine employer/employee exchange begins a downward spiral as Marianne, the idealist, tries to do the right thing for Rolando. The journey that follows felt right out of “State of Siege (1972)” or “Missing (1982),” except the uprising of the poor and the murderous corruption it spawns felt more from “Roma (2018),” with the proletariat rising against its capitalist rulers. The new order of “New Order” seems to show that no matter how things change, they often stay the same – or worse.