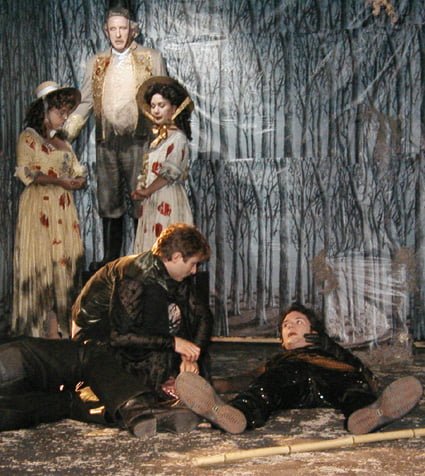 Toledo high school science teacher Danny (Joe Tyler Gold) dropped everything when his aspiring actor girlfriend, Ruth (Ilana Turner), dumped him for her fledgling career. He chases her to LA. and shows up at the theater staging a production of “Macbeth” where she is supposed to audition for a part in the play. When he utters the fateful query - “Are these the auditions for ‘Macbeth?’” - it is the last word that stops everyone in their tracks because we all knows that, in a theater, you “Never Say Macbeth.”

Danny (Joe Tyler Gold) is a Midwestern high school science teacher who is determined to get his drama teacher girlfriend Ruth (Ilana Kira) back, so he follows her to L.A. But once he's at the Zodiac theater, he's mistaken for an auditioning actor by director Jason Wright (Alexander Enberg, TV's 'Star Trek: Voyager') and becomes further entwined in their production by pulling a curse down upon it because he knows nothing of the superstitious theater tradition to "Never Say MacBeth." This DIY effort is the epitome of independent filmmaking with a cast and behind the scenes players from the fringes of Hollywood (Mark Deklin, the most glamorous cast member, has the most credits, mostly television one-offs). The story (written by star Joe Tyler Gold), about putting together a theater production amidst the fallout of a curse, is sweetened by the 'let's put on a show!' quality of the filmmaking. Theater lovers, in particular, should get a kick out of this slight but likable effort. Unlike the rest of the cast, Danny's not overjoyed when he wins a role, that of Witch 1, for his non-audition, until Vinnie (Scott Conte), cast as the Porter, points out that it would be a terrific way to stay around Ruth. Although she does not flat out reject Danny, Ruth is claiming focus on her career, although it's evident to everyone that something's going on with Scott Deedle (Mark Deklin), a movie star handsome guy with connections sullied by a stint in rehab. Danny isn't convinced of the MacBeth curse, either, even when Madame Betrovka (Velvet Rhodes) dies of shock and the cast relay its history - including an infamous fire that took a repertory company with it in the very theater they now stand in. Danny's almost killed by a crashing stage light (a fate which also almost befell Laurence Olivier), but it's not until he starts seeing ghosts on stage that he begins to take the curse seriously. Gradually, others make his mistake, and each, in turn, begins to see those rep players performing their last three plays - 'Pirates of Penzance,' 'The Importance of Being Earnest' and, of course, 'MacBeth.' Even worse, Ruth is possessed by the ghost of the original Porter, a drunken lout of a character that doesn't exactly jibe with her Lady MacBeth. On opening night, it's up to Danny and new love interest Tamara (Tania Getty) to try and keep the three-ring circus on the stage hidden from the expectant audience. "Never Say MacBeth" is an amusing take on both the theater and Hollywood, with its "Star Wars" obsessed stage manager Jeni-rhymes-with-Jedi (producer Tammy Caplan) and its wasabi dependent director (Enberg, also responsible for most of the low-tech effects) who builds his cast based on astrological signs. Performances range from good (Conte, Getty, Deklin) to earnest (Tyler Gold, Enberg) to overtly theatrical (Rhodes). Ilana Kira's ability to segue from Lady MacBeth to the Porter to her own Ruth within minutes is pretty impressive. Production values are negligible, with the film obviously having been shot all on one location (an outdoor restaurant scene looks like it was staged in a corner of the theater's back lot). Director Christopher J. Prouty keeps things moving along at a zippy pace until the film's time travel last act which lacks earlier focus and logic.

This amateur production - and I mean amateur in a highly positive way: a devotee to the art of filmmaking - starts slow and stilted but, as the curse of Macbeth takes hold, it crosses the screwball comedy threshold. Danny is mistaken, by the play’s wacky director, Jason (Alexander Enburg), as an auditioning actor when he explains why he is there ­ for love. Jason, though, thinks Danny’s impassioned soliloquy is his audition and hires him to play Witch #1. Things start to get weird for Danny when he, alone, seems to see ghosts from the past when the theater had burned down after someone, way back when, uttered the cursing word. He confides in another actor, Tamara (Tania Getty), who has always sensed the ghostly presence. Danny scoffs the idea of spectral spirits and Tamara, trying to convince him, accidentally says Macbeth.” She joins the schoolteacher as the only ones to see the ghosts. That is, until Tamara tricks Star Wars obsessed stage manager Jeni (rhymes with Jedi) (Tammy Caplan) into saying the forbidden word and she joins their tiny fraternity. Never Say Macbeth” takes the premise of the curse ­ something that is based in real-life incidents ­ and uses it to have some goofy fun with a play plagued with the ghosts from the past. The appearance of the apparitions ­ from “The Pirates of Penzance,” “The Importance of Being Ernest” and, of course, “Macbeth” being staged the night of the fateful fire ­ is amusing and a bit bawdy. The trials and tribulations of putting on a play with the ghosts around overshadow the reason Danny came to LA in the first place ­ Ruth. Director C.J. Prouty and scripter Joe Tyler Gold return to the romance, though, with humor as she is possessed by the inebriated spirit of Porter from the Shakespeare play. The actors, while not yet the most seasoned thespians, do a decent job with the material. Scripter Joe Tyler Gold does double duty as the movie’s straight man, Danny. The rest of the cast play off him with Alexander Enberg most amusing as the manic, fill of himself director/artiste, Jason. The rest give a good turn and the ghostly F/X, while low tech, are well done for a small budget indie film. Never Say Macbeth” has its heart in the right place and is a likable little film that has honors its theatrical influences. It has the same kind of charm that made “Waiting for Guffman” such a pleasure. In addition, I’ll never say the M word in theater from here on in.