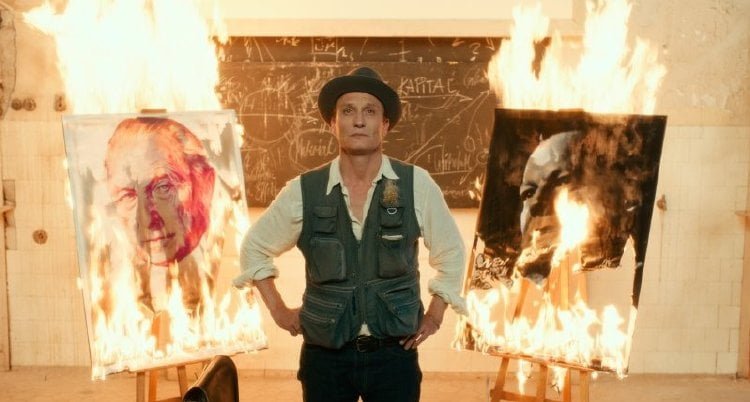 Kurt (Tom Schilling), a talented artist, was just a youngster during the rise and fall of Nazi Germany. Later, in the newly formed German Democratic Republic, he continues painting for the state but dreams of the freedom of the West in “Never Look Away.”

This mini-epic, by Florian Henckel von Donnersmarck (“The Lives of Others” (2006)) is loosely based on the life and art of German artist Gerhard Richter. In the artist’s place is Kurt Barnert, whom we meet in 1937 as a four-year-old attending a museum with his Aunt Elisabeth (Saskia Rosendahl). The subject of the exhibition is “Degenerate Art” that is banned in Nazi Germany, though Elisabeth secretly tells her nephew to never look away from things of beauty. The film spans decades of social turmoil and upheaval, from the start of Hitler’s designs of world conquest and the Holocaust to the Soviet takeover of Eastern Europe and the Cold War to the fall of the Berlin Wall and beyond. That is a long time span to cover and von Donnersmarck uses his three hour story to follow Kurt as he grows from boy to man amidst some of the most turbulent events of our time. Though “Never Look Away” is epic in its scope of time, it is also a very personal story of an artist as he evolves in his search for the “code of the world” that will define him and his art. And, we get to watch that artistic evolution as he creates his inspirations. The film is a character study of the artist and his art. Supporting cast is first rate, especially Sebastian Koch as the outwardly suave and humane, and inwardly ruthless and without heart or compassion, Professor Doctor Carl Seeband, the film’s bad guy. Paula Beer, as Kurt’s romantic half, Ellie, is also the not-so-good doctor’s daughter and develops a solid character arc. Saskia Rosendahl, as Kurt’s young aunt from the film’s start, is radiant as the artist’s guardian angel whose inherent goodness influences and forms his life – even after she falls victim to Nazi hate. The duality of “Never Look Away,” with its historic span of time and personal story of the artist, is key in making its three hour plus run time not feel like three plus hours. That is not an easy thing for a filmmaker to pull off.