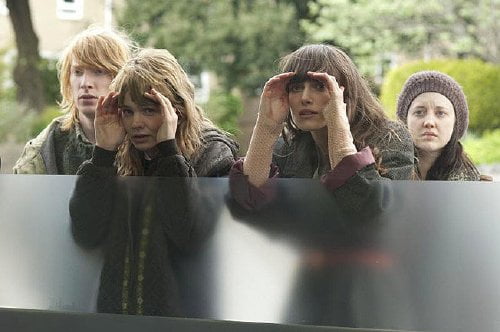 Three friends, the headstrong Ruth (Keira Knightley, "The Duchess"), introspective Kathy (Carey Mulligan, "An Education"), and the boy they both love, Tommy (Andrew Garfield, "Kick-Ass"), grow up in a sheltered existence at Hailsham, a British boarding school in which the students who create artworks chosen by the mysterious Madame (Nathalie Richard, "Caché") are the most envied. Years later the three meet under vastly different circumstances and Ruth tries to repair the damage she decided to inflict when she found Kathy playing the cassette tape Tommy had bought for her, Judy Bridgewater singing 'Baby, "Never Let Me Go."

Many critics who have seen this film in Venice and Toronto have complained about its protagonists' weakness, their willingness to accept a horrible fate without rebelling. They've all missed the point. Alex Garland's ("Sunshine") adaptation of Kazuo "The Remains of the Day" Ishiguro's novel makes it very clear - these children were raised separately from society and barely know how to function in the outside world. They're paralyzed when presented with a menu in a cheap cafe. Both the novel and video director Mark Romanek's (returning to feature film 8 years after "One Hour Photo") extremely cinematic retelling emphasize this with the symbol of an old boat beached on the shore, a boat which these three and those like them visit without ever seeing it as a means of escape. They're simply not programmed to rebel. It is difficult to discuss "Never Let Me Go" without revealing what many might consider a spoiler, a 'twist' which the book kept from its readers a lot longer than the film does. This is the story of a love triangle set within a retro science fiction environment, an England where vast medical advances were made in 1952 which prolonged life to ages of 100 by the 1960s, but not for all. We're told the story through Kathy's point of view, beginning with life at the hallowed Hailsham, and although we have her narration as a jumping off point, Ishiguro's work is actually better suited to Romanek's dreamy visuals than the page. Kathy may mention that Madame Marie Claude, the woman whose gallery the students aspire to, appears not to like them, but Romanek's actors exhibit the distaste and unease many 'outsiders' - delivery men, caretakers - feel around these seemingly normal kids and the effect is a lot more powerful. We're astonished when the 'bumper crop' of items for a rare sale - an opportunity for Hailsham students to barter their hard earned tokens for personal possessions - is revealed. A small old, battered plastic horse holds the essence of a soul. The mystery which the novel attempted - and failed to - extend is nonetheless perfectly rendered here. Why do some shrink away from these kids while others, like Hailsham's staff nurse, watch them with an eagle eye? Then there is Miss Lucy (Sally Hawkins, "Happy-Go-Lucky"), a new teacher often moved to tears by them. She dares to tell her class the unadorned truth and is sent packing, declared a subvert by school matron Miss Emily (Charlotte Rampling, "Life During Wartime"). Romanek sets all this in places of classic British nostalgia - the country estate-like boarding school, the rural farmhouse - which underscore the irony of what's going on. Years later, Tommy will pass on an unbelieved rumor about the state of education which is so obviously true in this parallel "Food, Inc." world. In the first act, Isobel Meikle-Small, Charlie Rowe and the extraordinary Ella Purnell portray the young Kathy, Tommy and Ruth and we watch these unspoiled kids play out drama usually reserved for adults. Meikle-Small achieves Kathy's purity and kindness. Rowe is the awkward Tommy, shunned by his peers, not good at the things - sports, creativity - that Hailsham holds in high regard (they'll both be mystified when Miss Lucy comforts Tommy by telling him these things aren't important). Ruth is a tricky character and Purnell is chilling in her manipulations. Later Knightley, in one of the best performances of her career, brings back the empathy for a young girl grabbing desperately at a chance to belong. Knightley's physical transformation is impressive - watch how she turns her hands into claws grasping onto a walker. Mulligan is fine, sensitive and Garfield deepens Tommy's shy, naive clumsiness. In the second act, where these actors take over, the trio is transferred to 'The Cottages' where they'll spend the years between eighteen and early twenties, the only years they have more or less to themselves. They meet people from other schools, including the 'worldly, Chrissie (Andrea Riseborough, "Happy-Go-Lucky") and Rodney (Domhnall Gleeson, clearly a Weasley in the upcoming "Harry Potter and the Deathly Hallows"), a couple Ruth looks up to and tries to impress. Kathy is the savviest of them, though, less likely to allow wool to be pulled over her eyes, but she does not see the real truth behind Ruth and Tommy's relationship. (If the story has a flaw, it is Kathy's reticence around Ruth and Tommy, not the threesome's lack of political fire.) In act three, the full truth is revealed, the rumors and stories of Hailsham dispelled, Tommy's childhood penchant for bursts of rage repeated in adulthood. It's both emotionally and intellectually haunting.