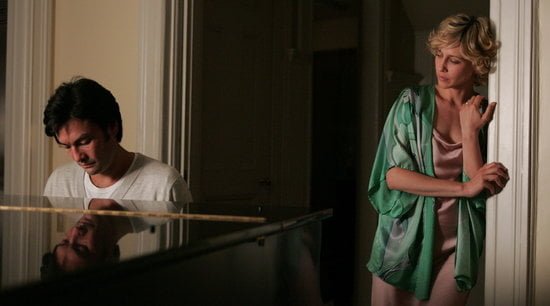 Blond ringletted, blue-eyed Sophie Lee (Vera Farmiga, "The Departed") is the perfect wife and daughter-in-law within a wealthy Korean-American family. But there is trouble in paradise as her lawyer husband, Andrew (David McInnis, "Typhoon") is suicidal over his inability to father a child. One day at the fertility clinic, Sophie overhears as illegal immigrant Jihah Kim (Jung-woo Ha, Kim Ki Duk's "Time") is turned away as a sperm donor and she confronts him with a most unusual business plan in writer/director Gina Kim's ("Invisible Light") "Never Forever."

This erotically charged melodrama about two vastly different Korean experiences in New York City and the Caucasian woman straddling both is beautifully directed by Gina Kim who balances emotional subtleties and highly charged scenarios without ever losing control. Vera Farmiga gives a deeply felt performance as the good, well kept wife who finds herself in a dingy Chinatown walkup and Jung-woo Ha is immensely appealing and affecting as her hard working, surprisingly romantic lover. We're introduced to Sophie at the funeral of her husband's father, a bright angel in a sea of black clothes and dark hair. The funeral's deacon later leads a severe family gathering where Sophie is instructed to pray for the child she and Andrew so desperately want. Andrew seems gently amused by Sophie's request to help her learn to pray and then takes a decidedly anti-Catholic action - he tries to kill himself. Desperate to save the man she loves, Sophie begs her doctor to slip her some more potent sperm than her husbands, but is turned down. She then follows Jihah deep into Chinatown and sees him punch in for work as a dry cleaner deliveryman. After leaving her husband's suicide suit at Jihah's cleaners, she approaches him with her proposition to impregnate her for $300 a try and a $30,000 bonus for success. Kim's writing gradually reveals character in the everyday. Sophie's confusion over a piano delivery Andrew neglected to mention illustrates a controlling aspect while her observation of Jihah taking a chair out of the trash on his way home from one of his jobs makes him appear both vulnerable and domestic. Sophie and Andrew are almost always seen in gatherings (even at home there is a housekeeper), lending an air of restraint and formality to their relationship, whereas she and Jihah are always alone. We can piece together, as does Sophie, Jihah's hardscrabble life, fixated on bringing a girlfriend from Korea to the U.S. When Andrew suddenly wants his jacket returned and Jihah observes Sophie dressed for Church in a sexy black dress (she dresses chastely, buttoned up, for their assignations) waiting in the car for the handsome, has-it-all husband of his same ethnic background, a seismic shift occurs. Both Sophie and Jihah begin to endanger their secret, but the confluence of events that lead to the film's climax play out unexpectedly, as does Kim's beautiful ending, not exactly ambiguous but pointed in how she leaves her heroine. Cinematography by Matthew Clark ("I Am Trying to Break Your Heart") is calmer and more composed in Andrew's world, more active and closer in Jihah's. The film has a lush violin score by Michael Nyman ("The Claim," "The Libertine") that perfectly complements the melodramatic romance.