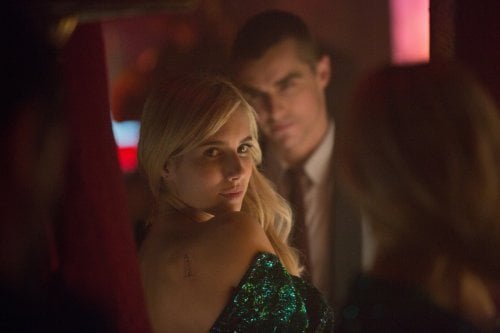 Shy high schooler “Vee” Delmonico (Emma Roberts) surprises herself by signing up for a daredevil competition which mines her data to exploit her emotions and streams live over the Internet. Paired with Ian (Dave Franco), a stranger she sparks with, Vee becomes a fan favorite, but her addiction to adrenaline-fueled fame creates jealousy with old friends and Ian's past makes a life or death proposition out of the game called "Nerve."

"Catfish" directors Henry Joost & Ariel Schulman continue to preach the dangers of the Internet, this time with a fictional thriller adapted from Jeanne Ryan's YA novel by Jessica Sharzer (TV's 'American Horror Story'). Featuring a series of stunts ranging from the somewhat embarrassing to potentially lethal captured on smart phones and GoPros, the film is a mildly engaging popcorn picture too lazy to effectively set up its premise. That it's all been done before in films like "Series 7: The Contenders," "Cheap Thrills," "Would You Rather," "The Den" and "Unfriended" with a climax lifted from "The Hunger Games," makes it all the more difficult to find much of interest here. The film opens as Vee negotiates her laptop screen, responding to CalArts' acceptance email (she's afraid to because clingy mom Nancy (Juliette Lewis, "Natural Born Killers") doesn't want her leaving home) just as her photo of secret crush J.P. (Brian Marc, the upcoming "White Girl") is liked on Facebook, photography the very thing Vee obviously wished to study. The next day at school, she's both shocked and kind of thrilled when her best friend Sydney (Emily Meade, "Money Monster") moons the crowd at a football game. Sydney's playing Nerve, a 'Player' who's attracting 'Watchers' while being paid for completing dares sent to her phone. After the game, Vee rejects Sydney's dare that she go up and talk to J.P., so Sydney does it for her with humiliating results. Back home, Vee checks out Nerve and, after some hesitation, clicks on the Player button. She's given the assignment to go to a diner and 'kiss a stranger for five seconds.' Recruiting Tommy (Miles Heizer, TV's 'Parenthood'), the teen who's secretly crushing on her, for a ride, she surveys the possibilities before landing on a guy reading Virginia Woolf's 'To the Lighthouse,' her favorite book. Tommy records the encounter for Nerve, then the two are surprised when her victim serenades her, a Player himself. When Ian presents her with the team dare he's just been sent, Tommy begs her not to go, but Vee hops on the back of Ian's motorcycle and heads into Manhattan. It's fun watching Vee's initial exploits (trying on a couture dress in Bergdorf's then having to make the choice to shoplift or exit the store without her clothes, getting a tattoo while rapping to Wu Tang Clan), but as the stakes are raised and Ian's back story is revealed, "Nerve" loses its edge. Watchers vote on the climactic dare (Ian and Vee against the other high scorer, Ty (Colson Baker aka Machine Gun Kelly), a man we've seen let a train ride over him) crosscut with Tommy and a bunch of friends hacking the open source game in the Deep Web to shut it down and none of it is plausible, especially given that hundreds have gathered in a brightly lit public space for this secret and unlawful event. It's too bad, because the concept of someone painting an exaggerated picture of herself online only to be faced with mob rule is a slick analogy of Internet trolling that gets lost in chaos parading as suspense. Roberts ably convinces as a wallflower thrilled by her own daring and a handsome stranger while Franco retains enough mystery to keep us guessing. Josh “The Fat Jew” Ostrovsky has a memorable cameo as a tattoo artist. Juliette Lewis's presence here is a mystery as her character leaps from cluelessness to hysteria. If you're going to make a movie about the potentials evils of technology, you'd be wise to put some effort into your technological blueprint. Maybe they're saving that for the sequel they obviously hope to spin. "Death Race: Pokemon Go" anyone? Grade: