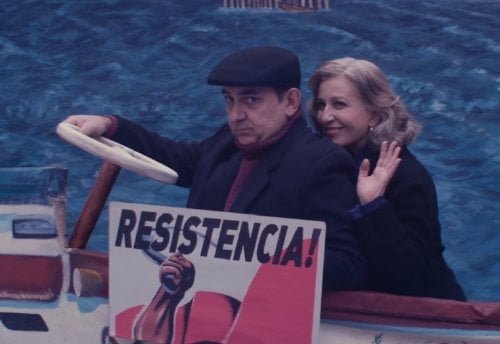 In the 1940s, internationally acclaimed Chilean poet Pablo Neruda (Luis Gnecco) was also a diplomat and senator in his country and avid supporter of the Communist party. In 1948, he spoke out against President Gabriel Gonzalez Videla’s brutal government crackdown with anti-communist oppression. Now an outlaw, this began a manhunt for the poet’s arrest, led by fascist Chief of Police Oscar Pelchonneau (Gael Garcia Bernal), and is chronicled in “Neruda.”

In 1948, Chile's Presidente Gabriel González Videla (Alfredo Castro, "No," "The Club") outlawed Communism and issued an arrest warrant for one of his senators, who went into hiding. Following his brilliantly unorthodox Jackie Kennedy film, director Pablo Larrain takes another unusual tack with his latest, (written by "The Club's" Guillermo Calderón) depicting one year in the life of Pablo Neruda (Luis Gnecco, "No"). The poet not only writes his Canon General, giving voice to suppressed, but creates his own foe, policeman Óscar Peluchonneau (Gael García Bernal, "Amores Perros," "No"), tempting fate time and again to play out one of his beloved detective stories. Larrain's film paints Ricardo Eliécer Neftalí Reyes Basoalto as an orator, poet, hedonist and egotist but also a chameleon whose took his pen name as his legal name. He's introduced deriding the man he helped attain office to his peers, later reading one of his early love poems at a costume party in his home in the guise of Lawrence of Arabia. Peluchonneau arrives at the presidential palace to receive his orders telling us he 'came from a blank page,' stopping in front of a statue of Olivier Peluchonneau, 'Chile's first jailer,' to muse that he is the man's illegitimate son, born of a prostitute. Informed that they have a new boss, the President of the United States who has decreed they 'kill all Communists,' Peluchonneau amusingly stumbles over questions used to gauge his potential sympathy for his prey. Raiding Neruda's home, Peluchonneau admires the decor before finding a detective novel inscribed to his 'brother policeman' propped up in Neruda's typewriter. Meanwhile, Neruda, in hiding with Delia del Carril (Mercedes Morán, "The Motorcycle Diaries"), tells his longtime lover he's feeling stifled, making one of his frequent visits to a brothel dressed as a padre. On one such visit, Neruda comforts and encourages the transvestite singer who's been pouring out his heart to him to the jeers of the crowd. It's a moving, beautiful scene, capped off with Peluchonneau's arrival, the detective missing Neruda now disguised among the prostitutes just like that singer. There is a similar scene after the senator runs to the coastal town of Valparaiso. Outfitted in a new white suit and hat, he's approached by a young beggar girl. He tells her he has nothing, enveloping her in a sad embrace. As he's rushed out, we see Peluchonneau's team interrogating the girl, clad in his white jacket. When Peluchonneau returns and visits Delia, left behind, she informs him is a supporting character, not real. The film is modeled as a period police thriller, travel depicted with vintage rear projection which accentuates the fantastical elements of Larrain's vision. He uses the Western in his climax, in which Neruda escapes on horseback over the snow covered Andes into Argentina, Peluchonneau on his tail. No longer needed by the writer, Neruda stands watch as the police inspector dies in the snow. Gnecco is mesmerizing in the titular role, his Neruda a jumble of contradictions, his 'Neruda voice' for poetry deep and soulful. Garcia Bernal is also a character in conflict, his imagined ancestry sympathetic to the cause of the man he's tasked with bringing down. We see the actor wrestle with Peluchonneau's origins as he plays his part of detective with dogged determination. "Neruda" casts its subject through his own art. Grade:

Director Pablo Larrain had a heck of year in 2016. He had an Oscar nominated film with “Jackie,” but before that is this historical docudrama about a year in the life of Pablo Neruda (nee Ricardo Eliecer Neftali Reyes Basoalto). Based on the year in Neruda’s life when he was a fugitive in his country, the screenplay, by Guillermo Calderon, is a fictionalized cat-and-mouse chase by Pelchonneau of the disgraced and impeached senator/poet as Neruda attempts to escape the oppressive Chilean government. Luis Gnecco bears a striking resemblance to the poet and does a fine job in portraying Neruda’s intellect, talent and, in large measure, his hedonistic ways. His pursuer (and possibly admirer), Pelchonneau is played with single-minded tenacity by Garcia Bernal, the son of a prostitute and, in his mind, the scion of a legendary figure in Chile. The hunt is set amidst the backdrop of the tumultuous times of change, and oppression of dissidents, in Chile, resulting in the arrest and internment of thousands of citizens. The cat-and-mouse chase is not about a manhunt, though. It is more battle of wits between the genius and the plodding bureaucrat. Neruda is more interested in his notoriety and reputation than he is about being caught; taunting the inspector with clues in the books he leaves for the cop to find. The story is equally divided between the two men, making for two distinct stories intertwined into one grander story.