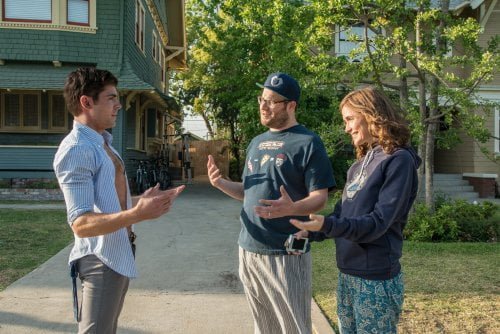 Mac (Seth Rogen) and Kelly Radner (Rose Byrne) are finally facing adulthood when they move into a starter home with their new baby Stella (Elise and Zoey Vargas). When the Delta Psi Beta fraternity move into the house next door, they see it as an opportunity to have some fun, especially after meeting its president, the charming Teddy Sanders (Zac Efron). But the college parties escalate way beyond their tolerance threshold and the Radners find themselves in an all out war with their "Neighbors."

Director Nicholas Stoller was the man who unleashed the unexpected funny in Rose Byrne in "Get Him to the Greek" and pairing her with Seth Rogen as a couple of young marrieds not quite ready to give up on their college years proves her comic abilities once again. But while "Neighbors" is frequently funny, writers Andrew J. Cohen & Brendan O'Brien's construction of the escalating war between these two and the next door frat house is sloppy, the gag more important than such concerns as neighborhood zoning laws and balance between prank and counterattack. Mac and Kelly get out their stroller and march right up to Delta Psi Beta's door to break the ice with a spliff, letting these guys know they're 'cool' before tossing off the request to 'keep it down.' Teddy and his VP Pete (Dave Franco, "21 Jump St.") play along, inviting the couple to join their house breaking. The new parents go overboard, Mac eating handfuls of magic shrooms, 'Batman bonding' with Teddy (Keaton vs. Bale), going home at the break of dawn. Teddy asks just one thing - that the Radners call him and not the police should they have a complaint. The very next night, Delta Psi is blaring. With ten phone calls unanswered and a baby awake in the wee hours, the Radners decide the cops must be called. The betrayal is paid back relatively lightly - a bush is raunchily sculptured, the house is TP'ed, but the Radners totally freak when they find Stella sitting on the lawn about to gum a condom (their rush to the ER is a hilarious picture of parental anxiety). A visit to the college Dean (Lisa Kudrow, TV's 'The Comeback,' 'Web Therapy') and appointment with their realtor prove dead ends, so Mac takes an axe to the frat's exterior plumbing pipes(?!). But the lads spring back, funding repairs with devilish wit, and so the Radners regroup, Kelly deciding to attack from within by getting Dave and Teddy's girlfriend Brooke (Halston Sage, "Grown Ups 2") to act upon their obvious mutual attraction. While they succeed, the resultant fall-out doesn't happen (bros before hos and all that), so the Radners decide to capture the seniors in a hazing incident with the freshman known as Assjuice (Craig Roberts, "Submarine") acting as insider. With the Dean's third strike hanging over their heads and all parties forbidden, the couple's last shot across the bow is to fool Teddy into thinking their suspension has been lifted, green lighting his goal of a legendary frat party to cap senior year. Surprisingly, the goings on at the frat house don't fuel much comedy. It's the immaturity of the adults and their reactions to the lads' pranks (an airbag stunt being a highlight) that make relative straight men out of Efron and Franco (along with the underutilized Christopher Mintz-Plasse and Jerrod Carmichael). A dance off initiated by Mac as a diversionary tactic shows off Efron's incredibly toned bod, but it's Rogen's belly jiggle control that puts it over. Likewise Byrne makes hay with exaggerated momma bear reactions that would be shrill in lesser hands. The two are ably assisted by Ike Barinholtz (TV's 'The Mindy Project') and Carla Gallo ("Get Him to the Greek") as their divorced-too-soon best friends. The film lands softly, almost sadly, due to that imbalance in the script. Time and time again, Teddy's revealed as a lost soul who usually goes out of his way to do the right thing. Rogen and Byrne sell the comedy here, but the film's pieces have jagged edges that never quite snap together.