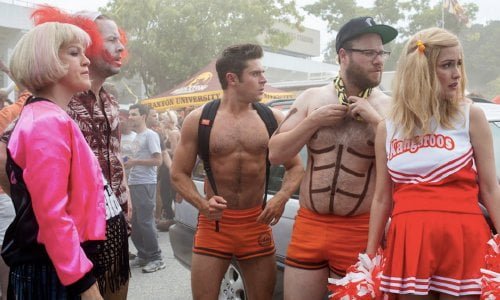 With a second baby on the way and the Delta Psi Beta fraternity no longer next door, Mac (Seth Rogen) and Kelly Radner (Rose Byrne) are ready to sell their home and move to the suburbs. But no sooner has the For Sale sign gone up than they're greeted by the girls of Kappa Nu, a group led by Shelby (Chloe Moretz) in rebellion against their school's sexist rules in "Neighbors 2: Sorority Rising."

Here we go all over again? Not exactly. This sequel from cowriter (with "Neighbors" Andrew J. Cohen & Brendan O'Brien and producers Seth Rogen & Evan Goldberg)director Nicholas Stoller ("Neighbors") is not only tighter and funnier than its predecessor, but takes on sexism, a looming concern for the parents of toddler Stella (Elise & Zoey Vargas, "Neighbors"). Rights for women isn't all the film has on its mind as Teddy (Zac Efron) is pushed from his nest by the impending marriage of Pete (Dave Franco) to Darren (John Early). That's right, Pete's come out since we last saw him, and Teddy, Garf (Jerrod Carmichael, "Neighbors") and Scoonie (Christopher Mintz-Plasse, "Neighbors") collude for a poker night serenade for Darren's proposal. As before, we're first find Mac and Kelly in the sack where their lovemaking is interrupted by untimely physical evidence of Kelly's new pregnancy. They're still adjusting to adulthood, rushing about to clear their home of bongs and vibrators (Stella's favorite toy) before their prospective buyers arrive. Meanwhile, Phi Lamda President (Selena Gomez) welcomes the new freshmen, but schools Shelby when the girl lights up a spliff - there's no alcohol or drugs allowed in U.S. sororities. Teaming up with like-minded outsiders Beth (Kiersey Clemons, "Dope") and Nora (Beanie Feldstein), who've found their first Frat party 'rapey,' Shelby decides to start their own sorority, one which will buck the unfair system. They fall in love with former house of Delta Psi but have no idea how to afford it - until they find their mentor in the despondent Teddy. Mac and Kelly try the friendly approach, begging the girls to keep it down during their 30 day escrow period, but Shelby's determined to 'party for what they believe in.' When the war escalates and Kappa Nu's finances are drained, they decide to corner the weed market for an upcoming tail gaiter. Teddy strongly objects and finds himself homeless again. Desperate to be valued, Teddy goes over to the other side. Sure there are echoes of the first film here, airbags repurposed, drugs unwittingly taken, the Radners' best friends Jimmy (Ike Barinholtz, "Neighbors") and Paula (Carla Gallo, "Neighbors") called back into goofy action, but the film's themes are stronger and articulated better. The Radners are now seriously questioning their parental abilities, looking forward in horror to their future daughter's perspective on them. Teddy is as lost as ever, a new 'child' in the Radner household whose failure to mature like his friends puts a fresh spin on the Radners' original dilemma (the filmmakers find him a perfect solution). The film's biggest set piece is that tailgate party, one which involves incredible stunts during a continually reversing chase scene. There is also a comically artificial scene of Mac in front of the Sydney Opera House, the result of some Kappa Nu cell phone shenanigans. The film's four letter word count is stratospheric, but it was the introduction of a new term for roofied that drew gasps from a preview audience. Once again, Rogen plays off his schlub appeal while Byrne takes on a fierce maternal streak. Moretz is game, one joke a feminist nod to her "Carrie" remake. Kelsey Grammer cameos as her dad. But the film's best asset is Efron, the little boy lost, the 'hot guy' willing to jump over a flaming grill in pursuit of his objectives. "Neighbors 2: Sorority Rising" is a raunchy comedy that declares women have the same rights as men when it comes to having fun. Grade: