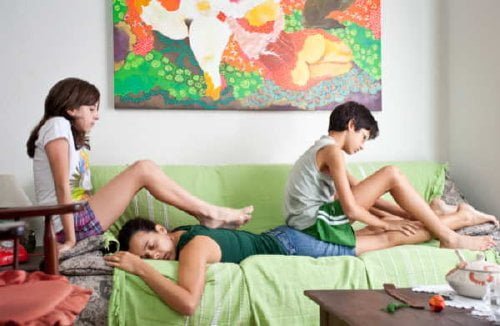 The faces of slaves on sugar cane plantations give way to the present, where a young girl on rollerblades skates about the walled enclosure at the base of her apartment building. The old social constructs of Recife, Brazil still echo in the present, where a middle class cocoons itself in paranoia, placing guard dogs, alarms and a team of security guys between themselves and the streets in "Neighboring Sounds."

Former film critic Kleber Mendonça Filho makes a powerful debut with a visually architectural film in which the details of everyday life accumulate in a swell of anxiety. Filho's sound is designed to put your teeth on edge, make you feel uncomfortable, at first by such common sounds as a ringing phone or barking dog. Everyone is enclosed. Even outside on their balconies, buildings tower around them. João (Gustavo Jahn) is the realtor for his grandfather, Francisco's (W.J. Solha), properties. He's a handsome young guy with a motherly maid who brings her grandchildren with her to do his chores. She's amused to catch him with Sofia (Irma Brown), a young woman he met at a party. But Sofia discovers that the CD player was stolen from her car, parked outside and João thinks he knows who took it. Meanwhile, Bia (Maeve Jinkings), a stay-at-home mom who buys pot from the bottled water distributor finds her life unsettled by the neighbor's barking dog. Things begin to escalate when João and his uncle, Anco (Lula Terra), are approached by Clodoaldo (Irandhir Santos, "Elite Squad: The Enemy Within"), a young man selling services to patrol their streets. The film has a cumulative effect as small occurrences weave together. João shows an apartment, pointing out the maid's room, still a common selling point. Later, he casually replaces his maid with her dour daughter despite the closeness he seemed to have with her mother. Bia has a television delivered and gets into a dustup with a neighbor from across the street who is also expecting one. That violent neighbor is Bia's sister and her television is four inches smaller. Francisco, a man of old money and status, is the only one who ventures out, walking at night to take a dip in the ocean where a sign warns of sharks. His exit and entry from the neighborhood are noted by Clodoaldo's team, communicating via cell. Director of photography Pedro Sotero helps achieve Filho's vision with his tracking shots through walled paths and his ever changing skylines delineated by balcony edges. When Francisco returns from the sea, he sets off a series of motion sensor lights with each home he passes. A quick look at a figure scurrying past an open door makes one horribly uneasy, as does Filho's sounds of footsteps overhead on wooden floorboards or the creaking of a stainless steel elevator. In the film's final moments, Bia fights sound with sound. Filo's film has the same kind of slow build over a foundation of social disquiet as the films of Argentinian director Lucrecia Martel while his structure is vaguely reminiscent of Alejandro Gonzalez Inarritu's "Amores Perros," yet his voice is unique, his film more accessible than those of the former, more subtle than those of the latter. His is a voice I look forward to hearing again.