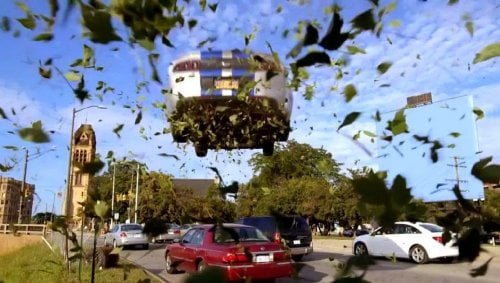 Tobey Marshall (Aaron Paul, AMC's 'Breaking Bad') is considered the fastest man in Mt. Kisco, New York, but he's having a hard time keeping the Marshall Motors afloat after the death of his dad. When local rich kid turned pro racer Dino Brewster (Dominic Cooper, "The Devil's Double") comes home trailing Tobey's ex-girlfriend, he makes an offer that Tobey just has to accept - completing the build of the Carroll Shelby's 2013 Mustang GT500 for a sizeable amount of its sales price. But a horrific accident in a double down dare race lands Tobey in jail while the guilty Dino walks and when he gets out, he's determined to take Dino down in "Need for Speed."

EA Entertainment's video game is fleshed out for the big screen from auto body owning screenwriter George Gatins (co-bro story credit from "Real Steel's" John) with an idea jacked from "The Vanishing Point," as Michael Keaton's Internet DJ, Monarch, keeps tabs on those worthy enough to enter his exclusive underground winner-takes-all De Leon race. This is where Tobey aims to take down Dino, so after getting his hands on the GT500 with high end car broker Julia Maddon (Imogen Poots, "That Awkward Moment") as its unexpected passenger/safekeeper, he has 45 hours to get cross country to its secret California location, using attention getting stunts along the way to secure an invite. Director Scott Waugh, who captured the jaw-dropping feats of real Navy Seals in "Act of Valor" forgoes CGI for the practical stunts which are the primary draw of a film whose story set ups strain credibility. Tobey's got a tight crew consisting of chief mechanic Joe Peck (Ramon Rodriguez, "Battle Los Angeles"), techie Finn (Rami Malek, "The Master," "Short Term 12"), Army Reserve pilot Benny (Scott Mescudi) and Little Pete (Harrison Gilbertson, "Haunt"), the younger brother of Anita (Dakota Johnson, TV's 'Ben and Kate'), the girlfriend who defected to Dino. Just guess which one gets sacrificed when Dino nudges one of the three Swedish Koenigsegg Agera Rs they race for their $2 million Shelby payday... It's a bit of a mystery why the Mustang's new owner loans his ride to a new parolee, but it's clear as day that Tobey's objections to his hot copilot will be upended. With Benny flying above as his personal traffic reporter, Tobey tries to scare Julia away by aiming head-on for a bus, but when his subsequent performance of 'The Grasshopper,' a two-lane jump stunt, wins only admiration, she turns out to be more help than hindrance, a fear of heights notwithstanding. Julia's phobia will, of course, be tested, in a bit of dazzling trickery, but Waugh's intent on making the entire ride hair raising. There's real speed at play here and the behind the dash POV shots can make one's stomach lurch. Benny's piloting of a Cessna, stolen news copter and Apache helicopter add overhead views of action that's covered from every angle. An early Mt. Kisco race features classics like a Gran Torino, Camaro and Pontiac GTO, but the De Leon ups the ante with a Lamborghini, Bugatti Veyron, McLaren P1, GTA Spano and Saleen S7. (Car lovers can rest assured that the massive destruction seen on screen feature replications. Still in a 'winner take all' race one's left wondering why racers should be motivated by a heap of twisted metal, one of the film's many unanswered questions.) Car friendly locations include Detroit, the Utah "Thelma and Louise" cliffs, the Bonneville Flats and Mendocino's Lighthouse Road. The production's only major flaw is Nathan Furst's ("Act of Valor") generic score.