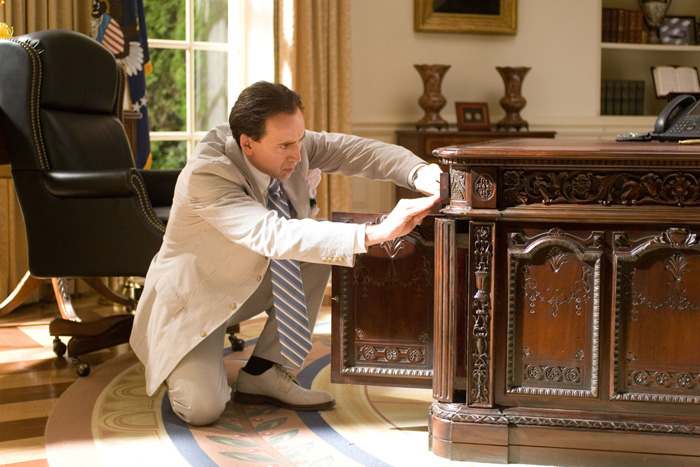 Director Jon Turteltaub ("National Treasure"), writers Cormac and Marianne Wibberley ("National Treasure") and the original cast plus "The Queen" return to piece together another puzzle using clues from national (and international) landmarks. Those who enjoyed the first should enjoy the second, but while Mirren and Bruce Greenwood ("I'm Not There") as the President freshen things up a bit, the film loses steam when it reaches its nearly identical climax that goes on...and on...and on. The film is preceded by a Goofy cartoon, 'How to set up your home theater,' that is not very funny and only serves to point out the fakery of CGI work in "National Treasure's" opening scene, a recreation of the night of Lincoln's assassination. Cut to the present where Ben and Patrick are giving a talk that paints their ancestor a hero - until, that is, Mitch Wilkinson (Ed Harris, "Gone Baby Gone") holds up that missing diary page. Ben convinces Abigail, now seeing White House flunky Connor (Ty Burrell, "Fur: An Imaginary Portrait of Diane Arbus," TV's "Back to You"), to x-ray the page where they find the imprint of a cryptogram that leads them to the Paris edition of the Statue of Liberty which in turn leads them to the puzzle boxes that are the Resolute desks (one in Buckingham Palace, its twin in the Oval Office) which then point towards the legendary City of Gold, hidden beneath Mount Rushmore. All the while Mitch is on their tail, mostly to add extended car chases and threaten damsels in distress. And, oh yeah, Ben needs to kidnap the president (using a hidden secret passage at Mount Vernon, natch) in order to get information from the titular Book of Secrets, a volume passed from one president to the next that also serves to set up the second sequel to the series. The Wibberleys haven't really stretched with their second Treasure movie and character motivations are strained to serve their plot (Ben and Abigail's breakup is more convenient than convincing, just as the thirty-two rift between Ben's parents is). The best back story is given to Riley, who is trying to make a buck from the first adventure in order to save his fancy sports car from impoundment by the IRS. The ending is a tired retread that is poorly edited. "National Treasure: Book of Secrets" is dumb popcorn fun that dishes out more of the same for those too overwhelmed by the holiday to seek more challenging fare.