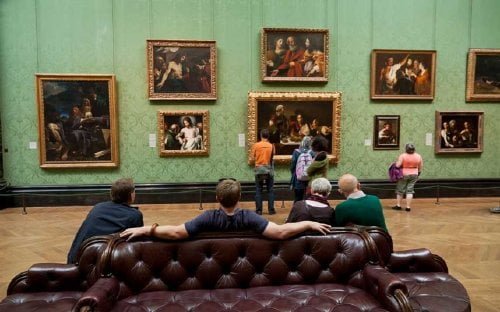 Another classic Wiseman work in his more recent explorations of the arts, "National Gallery" plunges us into the museum along with its visitors, into its private meetings and restoration workshops and the hush that falls when its doors close. This one isn't a complete soup to nuts exploration of an administration so much as it is an exploration of how we communicate with art, Wiseman's sly sense of humor peaking through in his editing. We see a range of Gallery employees instructing the public. One lecturer deftly imagines her group right into the 14th century church where a religious work hung in order to inspire the artist's intent in his original setting while another guides the blind with braille reproductions, focusing on form. Very young children are engaged through the stories the paintings tell. Adults are asked to consider just why Velázquez positioned his Venus with her back to us, her face only visible in a mirror. (Wiseman's camera is, of course, also reflecting the image reflecting the image, just as it does observing a maintenance worker buffing floors or the shadows of men adjusting scaffolding.) Art historians add to the mix by interpreting symbols, some paintings said to tell of murder. A beautiful work like George Stubb's Whistlejacket is given a macabre background when we learn the artist bought the skinned corpses of horses from a tannery and hung them in his workspace in order to exactly build his subject's musculature. Mystery is introduced via painstaking restoration work that's archeological in its process. In addition to the fine working of cleaning and recovering, we see how previous restorers have made conclusions based on their time's technology which may have been inaccurate, perhaps having not recognized an underlying prior work now divulged by x-rays. As in "At Berkeley" we see teachers instructing new recruits and hear administrators discuss how to adapt to budget cuts. The Gallery's director is a tough sell on marketer's efforts to make the museum accessible to a broader public and annoyed to learn the Marathon will end close to his front entrance, despite the television exposure it might bring. And if one notices that National Gallery visitors appear immune to recent trends to view art through the lens of a Smart phone, it is because using such devices is forbidden here. Wiseman punctuates his film with montages of paintings, but it's more amusing when he intersperses these with the people who appraise them, finding like expressions, similar visages. He concludes with a ballet piece set among the artworks, mixing movement and fixed image in forms which are capable of suggesting both.