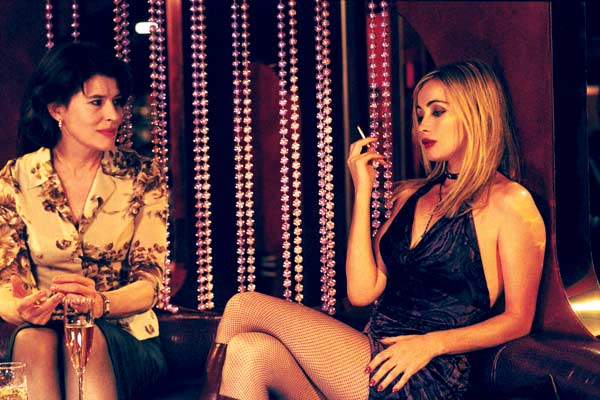 Catherine (Fanny Ardant, "8 Women," "Callas Forever") is disappointed when her husband Bernard (Gérard Depardieu) is held up in Zurich the night of his surprise birthday party, but she is devastated the next day when she discovers a message from the unknown woman who may have been the real cause. Determined to explore her husband's secret life, Catherine hires a stripper, Marlène (Emmanuelle Béart, "8 Women," "The Story of Marie and Julien") as bait for Bernard and sends her out to report back under the alias "Nathalie."

Director Anne Fontaine ("Dry Cleaning," "How I Killed My Father") takes a titillating idea by Philippe Blasband and three of France's biggest stars and turns in something that plays like a feminine reader's letter to Penthouse forum. Surprisingly, in this film about two women, Fontaine is most successful with Depardieu. The actor seems to gradually shade his character with his wife's changing perceptions. But Béart brings this film little but her extraordinary beauty and even more disappointing is the totally bland performance from Fanny Ardant, a stunning, iconic actress of great talent. At first, Catherine seems like she may be interesting. She leaves her office (only late in the game do we realize she's a gynecologist) and enters a club usually frequented by male clientele. Marlène turns her sights on the attractive older woman and begins a flirtation only to find that Catherine thinks Marlène would be her husband's type. The two women meet again in a cafe and strike their bargain, but Catherine is distraught when she hears that 'Nathalie' has had sex with Bernard (we only see the two meet with Nathalie requesting a light for her cigarette). Still, she returns to the club and asks the girl to continue and as the girl's sexy stories go farther and farther, so does Catherine, but not with Bernard. A final big 'twist,' which should be no surprise to anyone watching this film, sets everything to right again, a case of French marital therapy by way of the "Red Shoe Diaries." Fontaine hints at things which she never really delves into. There's a suggestion that Catherine is turned on by Nathalie, yet her reveries turn towards younger men. There's family friend François (Wladimir Yordanoff, "L'Auberge espagnole"), who clearly adores Catherine, but the character's importance is obscured. Catherine and Bernard's grown son (Rodolphe Pauly) is about to marry, but his story is an afterthought when it should have something to say about his parents'. Catherine makes frequent visits to see her elderly mother (a terrific Judith Magre, "Les Amants"), who clearly likes Bernard, but Ardant fails to make even a visit with Nathalie that turns into a 'girls night' much of an illumination into her character. "Nathalie" is a complete enigma - a film starring two of France's greatest beauties that is all about sex, yet quickly turns into a big bore.