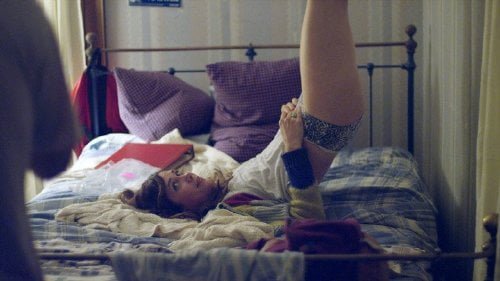 Brooklynite Polly (Kristen Wiig) is desperate to have a child and has enlisted her best friend Freddy (Sebastián Silva) as her donor. After five unsuccessful attempts, Freddy's sperm count is found to be too low and so the two turn to Freddy's boyfriend Mo (Tunde Adebimpe, "Jump Tomorrow"). Initially reluctant, Mo eventually feels the love and agrees, but Freddy's disappointment in not fathering the child is reflected in his latest video art piece "Nasty Baby."

Once again Chilean writer/director Sebastián Silva ("The Maid," "Magic Magic") has created a work of mysterious subtext while focusing on a character on the extreme end of societal acceptance. Who is that character here? Not the obvious one. "Nasty Baby's" beginnings suggest a comedy about unconventional families, here a gay couple consisting of a Chilean and a black man who intend to create a child with a female friend and share parenting. But, as in his criminally underseen "Magic, Magic," there is a strong sense of foreboding all along, Silva littering his story with clues that this just may be an unholy alliance. We first see Freddy hanging his own baby pictures, some of which will feature in his video where he himself reverts to babyhood. But he soon has another obsession, a disturbed man known as The Bishop (Reg E. Cathey, 2015's "Fantastic Four") who elaborately aids drivers trying to park and who awakens Freddy daily at 7 a.m. using a leaf blower on the street. Freddy and Polly encounter, but do not recognize, Bishop selling odd objects on his stoop and buy a couple things, only to be warned by Freddy's older gay neighbor Richard (Mark Margolis, "Requiem for a Dream," "Black Swan"), the 'Mayor of Adelphi Street,' that they shouldn't be encouraging him.' Things really cross a line as Polly carries a tree to give Mo for his birthday and Bishop becomes too aggressive in his offer to help. During Mo's party, the friends discuss Bishop, Freddy even drawing then defacing a picture of the man. They decide to use a gag gift of stink bombs as revenge, lobbing them into Bishop's below ground apartment, then regretting their action. The next day the threesome journey out for more celebration at Mo's parents, where his father (Anthony Chisholm, "Reign Over Me") will first meet Freddy. Things become uncomfortable when Mo's sister (Marsha Stephanie Blake, "Stand Clear of the Closing Doors") objects to their unconventional approach to parenting. Ironically, it is that night that the deed is accomplished. Silva's film is full of small rituals and ceremonies. There are burning herb sticks, an Oracle, fire and water purification, all items suggesting Santería, the Caribbean religion whose final ritual recreates the initiated as a newborn baby. Mo is obsessed with plants and his 'birth day' is a central celebration. The film's shocking climax is the most potent ritual of all. Animals, including Freddie's cat Suva, are also a constant, a mounted deer head hanging on the living room wall an observer that takes almost magical form later in the film. When Polly is close to achieving her dream, an abused patient interrupts the moment, another bit of subtle foreshadowing. All of these things are woven into Silva's fabric artfully, there for those keeping close watch. The central three create a beautiful balance, Silva's highly wound Freddy countered by Adebimpe's quiet calm. Wiig's Polly may have a single-minded focus, but she brings a caring, maternal nature to her character (Wiig is also almost creepily uncanny playing one of Freddie's video babies). Support is also strong. Cathey is a major presence as the mentally unhinged Bishop, Margolis kindly and morally authoritative as a one man neighborhood watch. Constance Shulman (Netflix's 'Orange Is the New Black') makes the most out of a small role as Bishop's scrawny, strung out girlfriend. The film also stars Silva's brother Agustín ("Crystal Fairy & the Magical Cactus") as Freddie's naive younger brother, Alia Shawkat ("Cedar Rapids," TV's 'Arrested Development') as his assistant and Lillias White ("Pieces of April") as Mo's mother. The DVD: The DVD (no blu ray is available) includes the usual options (chaptering, etc.) in addition to a 'Behind the Scenes' featurette, which gives a good sense of how the filmmakers and cast rehearsed and improvised. The commentary track with Silva, Adebimpe and Wiig is good fun. We learn that the film was shot in Silva's apartment, that Suva is his ex-cat, now owned by a professional wrestler in New Jersey and that the 'Based on a true story' which begins the film is a Coenesque lie. Adebimpe stood in for Cathey in one long shot and while the Santería theory is not confirmed, the actor notes that one scene is an 'instant ceremony.' Silva also gives some insight into pacing decisions and how he used certain scenes to distract the audience from his actual agenda. Grade: