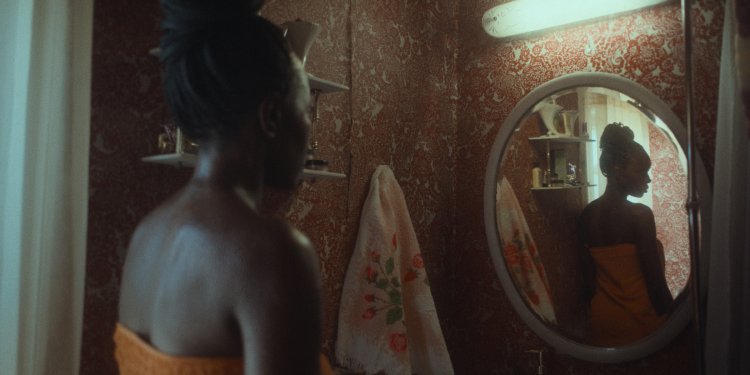 Senegalese immigrant Aisha (Anna Diop) hopes to quickly save enough money to have her young son, Lamine (Jahleel Kamara), join her in the U.S.  But as time passes, her calls to his Auntie Mariatou (Olamide Candide-Johnson) frequently go unanswered, she has troubling watery dreams and hallucinations and she has trouble collecting her pay from the wealthy Upper East Siders who employ her as their “Nanny.”

Don’t go into writer/director Nikyatu Jusu’s feature film debut expecting a horror film, at least one designed with scares in mind.  While there are a few somewhat eerie moments, this is more a character study of a haunted woman trying to establish roots in a foreign land for the son who is an entire ocean away.  If anything, it is Aisha’s experience with career woman Amy (Michelle Monaghan) and traveling photojournalist Adam (Morgan Spector, HBO's 'The Gilded Age'), the parents of her young charge Rose (Rose Decker), which is the film’s most unsettling aspect.

Upon arriving for her first day, Aisha only notes the type of rich white people oddities most Americans might expect, like the fact that the book of contact numbers Amy gives her includes one for five year-old Rose’s therapist.  Amy gives her a tour of their luxe apartment, noting her absent husband’s study, full of pictures of black rebellion and oppression in other parts of the world, is ‘off limits’ and that Aisha should do anything she wants to make her own designated room, where she will occasionally sleep over for an additional fee, her own.  The woman requests a hug before departing.

At first everything is wonderful, Aisha all smiles, Rose blossoming in her company, the picky eater taking to Aisha’s home cooked meals and French lessons.  Things begin to veer into a more uncomfortable direction when Adam returns home, seemingly hostile to his wife’s surprise party as well as the surprise of Aisha’s presence.  That evening, sleeping in her assigned room, Aisha’s awoken by the rattling of her door handle just before water pours down from the ceiling (cinematographer Rina Yang (HBO's 'Euphoria') covers her gaping-mouthed face beneath a drenched sheet from multiple angles, a bit of first time filmmaker excess).  Of course, this turns out to be a dream, but soon Aisha keeps spotting Lamine near water (one phone call places him by the ocean).

She also thinks she spots him in the lobby, but that turns out to be Bishop, the son of concierge Malik (Sinqua Walls), who informs her his dad ‘has a crush on her.’  A relationship is sparked and Aisha meets Malik’s grandmother Kathleen (Leslie Uggams), a psychic who sees the magic in the young woman and tells of her Mama Wati, a West African mermaid and trickster just like Anasi, the spider in Rose’s children’s book who seems to leap off the page.

Diop takes us on an extraordinary arc, her joy at beginning to accomplish her goal curdling into righteous resentment of those who would take advantage of her time and talent.  Jusu parallels incidents of Rose eluding her watchful eye with the supernatural, Diop called upon to react to both simultaneously.  The actress enjoys a natural and sexy romance with Walls which provides both a respite and Uggams’s mystical guidance.  Monaghan hints at deep disturbances which add to Aisha’s increasingly claustrophobic panic while Spector doles out more everyday indignities beneath a mask of good guy concern.

“Nanny” doesn’t really offer any surprises in either the reality of POC caring for the children of others while yearning for their own or in the supernatural path it takes, but Diop invests us fully in Aisha’s fate and Jusu confidently navigates both the real and imagined.

Aisha (Anna Diop) came to New York City from Senegal searching for the American Dream. Instead, she cares for the six-year old daughter of a well-to-do couple on the Upper East Side. The promised dream proves elusive at best for the “Nanny.”

First time film director Nikyatu Jusu has an ace in the hole in her debut feature: Anna Diop as the titular caretaker. We meet Aisha as she interviews with Amy (Michelle Monaghan) and learns of her duties caring for young Rose (Rose Decker) – all laid down in detail in a manual. The rules are rigid, but the new nanny is a rebel so lines are drawn.

There is more to the story than Aisha coping with a demanding employer and taking care of her child. The nanny has a son she had to leave in Senegal with her sister while she starts a new life and prepares for her boy’s arrival. This is where a horror element is introduced but not the kind of horror you are used to. It is far more psychological in its dealing with a mother’s forced separation from her child and the nightmares it spawns. That, to me, is real horror.

The contrast of the haves and have nots is striking. The entitlement of the wealthy to the detriment of anyone beneath is palpably on show as employer Amy abuses Aisha by trying to short change pay and making increasingly burdensome demands on her time. Amy’s blithe ignorance is tempered somewhat by husband, Adam (Morgan Spector), who tries to make up for Amy’s demands. There is a sense that something is not quite right with the couple but it is left unsaid.

In the end, the film belongs to Anna Diop whose striking presence sticks in my mind. It is a fully formed performance in the director’s first work. There is a lot of talent on display and it will be an interesting to watch it form.

Amazon Prime released “Nanny” into select theaters on 11/23, expanding in ensuing weeks before streaming on Prime on 12/16.