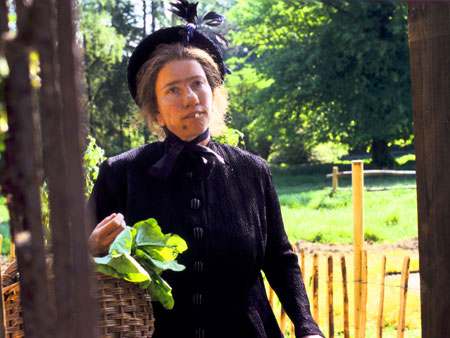 When the seventeenth nanny in Cedric Brown's (Colin Firth, "Bridget Jones' Diary") employ leaves screaming that his children have eaten the baby, Brown begins seeing ads and hearing a magical voice that instruct him that he needs "Nanny McPhee."

Emma Thompson, the Oscar winning screenwriter of "Sense and Sensibility" and uncredited polisher of this year's "Pride & Prejudice," has created a new vehicle for herself by adapting the 'Nurse Matilda' books of her childhood. This warmly bright family film features Thompson fitted out with a bucktooth, two warts, bulbous nose, a unibrow, bad skin and lumpen figure as the titular character of this uniquely British twitting of their own "Mary Poppins." Cedric is having a difficult time getting over the death of his beloved wife and their seven children (whose existence is quite pointedly seen as a reflection of the former couple's joyous sex life), convinced by fairy tales that all stepmothers are evil, are ensuring that they will not get one with their out of control behavior. Pretty scullery maid Evangeline (Kelly Macdonald, "Finding Neverland," HBO's "The Girl in the Café") has a loving way with the entire Brown family, but of course, Cedric does not recognize what is right in front of him. Instead he reacts to Great Aunt Adelaide's (Angela Lansbury, TV's "Murder She Wrote") demand that he marry within a month or lose the necessary income she provides by courting the blowsy and thrice widowed Selma Quickly (Celia Imrie, "Calendar Girls," "Imagine Me & You"). Into this dire set of circumstances arrives Nanny McPhee (the character's name was changed to avoid confusion with Danny DeVito's 1996 adaptation of Roald Dahl's children's book "Matilda"), purportedly to teach the children five basic disciplines but in reality to change so much more. As Nanny McPhee ruefully warns the disbelieving tots, 'When you need me but don't want me I must stay, but when you want me but no longer need me, I must go.' Beginning by responding to a manufactured measle outbreak by magically making the children really feel rotten, then dosing them with an evil brew (no spoonfuls of sugar to make this medicine go down), Nanny McPhee gradually gains the Brown brood's respect and obeisance. Their former ringleader, Simon (Thomas Sangster, "Love Actually"), the eldest, is encouraged to think for himself and take responsibility for his siblings. Even Cedric learns that he must listen to his children. Most surprisingly of all, Nanny turns a blind eye to mischief when its effect is desired and the children are willing to live with its consequences. Animals disguised as children, toads in the teapot and cake flinging ensue. "Nanny McPhee" is full of the type of whimsical British morbidity that finds Cedric working in a mortuary with two gay assistants (Derek Jacobi, "Gladiator," "Gosford Park" and Patrick Barlow, "Bridget Jones's Diary") tending to old dead men with very gnarly feet. We're greeted at the onset with the blackly comic vision of the young Browns eating chicken legs capped off with baby booties and Thompson's clever wordplay contributes verbally as well, with McPhee warning she will not stand for 'loose vowels.' The whole film's design (Michael Howells, "Bright Young Things") is delightfully twisted, the Brown abode the picture of a Gothic brick schoolhouse, shabbily appointed in bright yet slightly sickly primary colors. Costuming (Nic Ede, "Bright Young Things") contributes with exaggerated ornamentation for its more outlandish females while a pert WAC cap sits atop the head of Mrs. Blatherwick (Imelda Staunton, "Vera Drake"), the cook. The makeup, prosthetics and hair which aid Thompson's transformation are thoroughly convincing and subtle when their gradual disappearance marks the fadeout of the children's ugly conduct. Thompson is magical as McPhee, underplaying the role so that it is the results of her actions that take center stage. She's a calm and sturdy presence with a disquieting ability to appear out of nowhere, her guttural 'hmms' marking things in need of fixing. Firth provides the requisite harried dad with a shading of melancholy mixed with shy yearning and Macdonald is sweetness itself as the unacknowledged object of his affection. Celia Imrie and her quivering, emoting bosoms are grossly yet hilarious unappealing and Lansbury takes pursed lips to a new level. Director Kirk Jones ("Waking Ned Devine") keeps the children somewhat interchangeable, a mass cacophony with few distinguishing notes. Baby Aggie, though, has the character of "Lemony Snicket's" Sunny, given voice with the well chosen word dubbed on the soundtrack (the babe even gets to make an "Austin Powers" reference). "Nanny McPhee" is a very adult revel in all things childish and a comical expression of dramatic themes. While not quite a classic, it is nonetheless a magically constructed children's film.