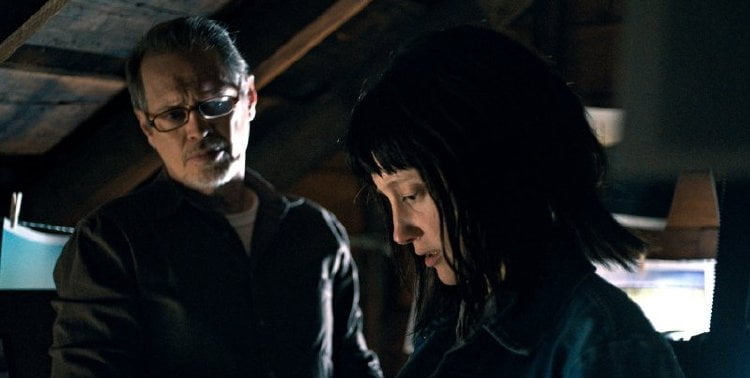 35-year old Nancy (Andrea Riseborough) lives a mundane life, caring for her demanding invalid mother. One night, she sees a news story on TV about a couple, the Lynches, whose five-year old child disappeared 30 years ago. The age progression photo they show is the spitting image of “Nancy.”

Nancy Freeman (Andrea Riseborough) is a mousy woman hiding behind her blunt cut bangs whose life is subsumed by caring for her demanding, disabled mother (Ann Dowd). She escapes into fantasy, creating false personas online. After her mother's death, Nancy sees a news item about a couple still searching for their daughter, snatched away at a shopping mall thirty years ago. Noting her resemblance to a forensically aged drawing, she calls the couple and the woman who answers, Ellen Lynch (J. Smith-Cameron), wants to believe her missing Brooke is "Nancy." Writer/director Christina Choe won Sundance's Waldo Salt screenwriting award for her feature debut, a project inspired by personal experience with a writing professor. The story is intriguing and Smith-Cameron and Steve Buscemi are wonderful embodying hope and cautious doubt, both actors' performances compassionate. But while Riseborough exudes fragility and loneliness, there is a creepy undercurrent to her performance that gives the film an odd edge, one which would make me, at least, be concerned about being murdered in my own bed. The film begins in a 4:3 aspect ration, opening up to a 16:9 when Nancy arrives at the Lynch home, indicating an expansion of her horizons. Locations have a real world quality of small town centers and roadside stops, the Lynch house a home of long standing, filled with memories. One of Choe's most artful bits of plotting involves Nancy's cat, the woman's most cherished companion a device that puts a wedge between her and Buscemi's Leo while providing Ellen one more piece of her puzzle. Grade:

The composite picture convinces Nancy that she is, in fact, the long lost daughter of Leo and Ellen Lynch (Steve Buscemi and J. Smith-Cameron). She calls the couple and speaks to Ellen, telling her of her suspicions, and sends a photo. Although Leo is skeptical, they invite Nancy for a visit. She packs her bag and her cat, Paul, and drives to the Lynch home in New Jersey. Once they meet, Ellen is easily convinced that Nancy is her long-lost daughter, Brook. Leo hires a private detective who questions Nancy and takes saliva swabs for DNA testing from them all. Then, the potential new family waits for the results – in two to three days. First time feature helmer Christina Choe has an interesting story of despair and hope, but there is something sinister in that story that I think is unintentional. Nancy, apparently, has always felt that there was something wrong with her relationship with her mother, Betty, (Ann Dowd), who treats her like a servant and not her daughter. This life long doubt is given credence whence she sees the Lynches on TV. Following her mother’s death, Nancy sets the gears into motion to find her “real” parents. She has lived a solitary life for so long that her social skills are lacking. But, instead of her social naïveté being a comforting thing. I kept having the nagging feeling that Nancy might freak out in some violent way. I do not think that was writer Choe’s intent but it is what I came away with at the end of the film. I found the characters of Ellen and Leo very effective in conveying the emotions of terrible loss and, with Nancy’s arrival, more than a glimmer of hope. Ellen’s overwhelming desire for that hope to be truth and Leo’s skepticism and protectiveness of her are palpable and feel genuine. Andrea Riseborough as Nancy, though, is far too enigmatic a character to garner my sympathy. The sinister feeling I had about the woman pervades my opinion, I know, but it is still there. The Lynches story is compelling and grabs my empathy. Not so for Nancy.