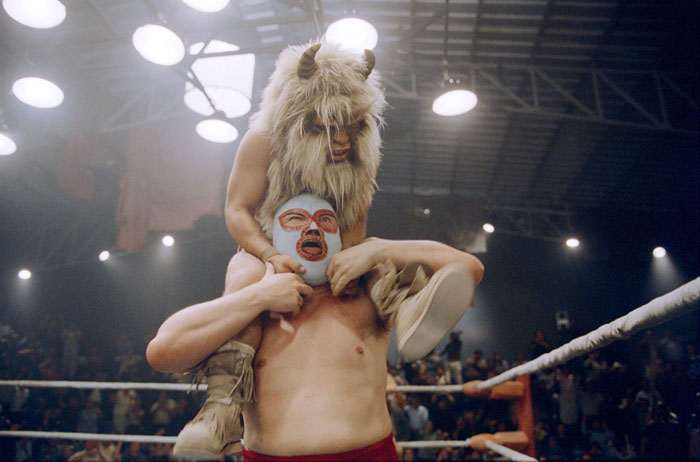 Nacho (Jack Black) was orphaned at a tender age and grew up in a Mexican monastery. Now, he’s all grown and the monastery’s cook, deeply caring for the orphans he feeds. But, his food is terrible and he blames the ingredients he is forced to use. He wants to buy better food for the kids he cares so much for and comes up with a plan: earn the money he needs by becoming a Lucha Libre wrestler. But, the martial art is forbidden by the monks and he is forced to lead a double life. By day, he is the unassuming cook. But, by night, he dons his mask and cape and becomes “Nacho Libre.”

Nacho (Jack Black, "School of Rock," "King Kong"), the orphaned child of a Swedish missionary and Mexican deacon, now cooks for the orphans and monks in the monastery where he grew up. But his food is terrible. When the day old tortilla chips donated for the orphans are stolen from him by a rail thin street guy, Nacho gets an idea - he will pursue a forbidden childhood passion by teaming up with this guy as luchador wrestlers to make money for better food as the masked "Nacho Libre." "Napoleon Dynamite" director Jared Hess and his cowriting brother Jerusha team up with "Black and White Productions'" writer Mike White ("The School of Rock") and producer/star Jack Black for some inspired silliness by way of Mexican Lucha Libre wrestling popularized in movies of the forties and fifties. The only problem is that their inspiration is long in coming. The movie manages to float, though, on the capable shoulders of the dementedly talented Black and a well chosen supporting cast. Nacho convinces that feisty street bum (newfound talent Héctor Jiménez) to transform into Esqueleto, the Laurel to Nacho's Hardy, with the lure of 200 pesos. The duo get themselves whooped by everyone from reigning Ramses (Cesar Gonzalez) to "Satan's Helpers," a pair of midgets known in the biz as 'minis.' As Nacho leads a double life, he also embarks on a fantasy one with Sister Encarnación (Ana de la Reguera), the lovely and innocent nun he woos with toast. When his robes catch fire with an altar candle one day, Nacho's wrestling tights are exposed beneath his friar's rope, but he rebounds in the young holy woman's eyes with his impassioned speech about taking on Mexico's greatest fighters in order to better the lives of the orphans. Ofttimes, especially in early goings, one finds that one is reacting to the humor factor in the off kilter, Danny Elfman composed music playing with a scene than anything that has been written for it. Much of the humor is pretty cliched, like last rites for a corpse that is not dead or two priests vying for the attention of a pretty nun, or yes, even fart jokes. Running 'gags,' like doll collections and the magician's tablecloth trick, are just repeated, not funny (although Esqueleto's preferred treat of buttered corn on the cob on a stick and Nacho's motorized framework vehicle work). Nacho's retreat into the desert might go on for forty days and forty nights, but it is not mentioned. Jack Black, however, he of the furious yet controlled eyebrows, devilish facial contortions and inspired physical comedy (he sports his bulk with gusto, as graceful on his feet as Gleeson), is so appealing in the title role that good will is ensured. Héctor Jiménez, sporting a mouthful of teeth sprouting in all directions, is a brilliant sidekick and socks over the film's first laugh-out-loud line. Ana de la Reguera, who looks like a more even featured Penelope Cruz, embodies sweetness and displays the comic chops of a silent film comedienne with her reactions. Also of note is Richard Montoya ("Encino Man") as the unevenly mustachioed Guillermo, another monk with eyes for Encarnación and Darius Rose ("Bruce Almighty" as overweight orphan Chancho who knows Nacho's secret. Cinematographer Xavier Pérez Grobet ("Nine Lives") evokes the look of old spaghetti westerns (Chanco is often shown in lower left frame against a sweeping vista). Costumer Graciela Mazón ("The Legend of Zorro") does a great job assembling Nacho's costumes from 'found' materials (rosary beads, altar cloths) and gets laugh from his and Esqueleto's leisure wear as well. "Nacho Libre" is a disappointment from the creators "Napoleon Dynamite" and "The School of Rock" but it still packs some comedic punch.

Maddin’s 80-minute treatise on the city of his birth is a fascinating blend of formats as he tells the history of Winnipeg and its denizens. His recreations, particularly the scenes of a horse graveyard that became a lover’s lane site for the town’s citizens, are striking in their look and feel. And, life in this wintry city goes on despite the cold and snow. Maddin discusses Fun Park, an amusement park that functions year round. (Having been to Quebec City in the dead of winter and taking a ride on its famous ice slide at -17 degrees below zero, I can attest to the sturdiness of our Canadian neighbors in dealing with their bitter winters.) My Winnipeg” may have limited appeal to film goers, but buffs familiar with Guy Maddin’s work will appreciate his imaginative view of his hometown. His striking combo of fact and fiction (was there really a local Winnipeg TV show called “Ledge Man,” a serial that had the titular character threatening suicide by jumping off a building ledge, for whatever reason, daily? ­ apparently, there was!) keep the eye interested and the mind wondering what is real or not. This is a densely packed and whimsical autobiography of a man planning to leave his beloved home for the last time.