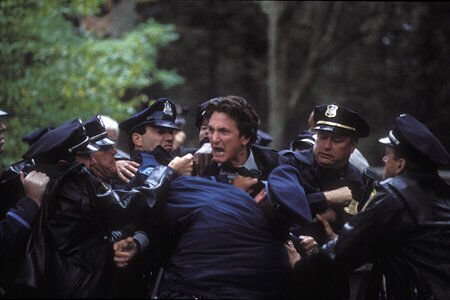 Jimmy (Sean Penn), Sean (Kevin Bacon) and Dave (Tim Robbins) were childhood friends splintered apart after young Dave was kidnapped from their midst by pedophiles who held him for four days. A generation later, the murder of Jimmy's nineteen year old daughter Katie (Emmy Rossum, "Passionada") reunites the three in the strange patterns and secrets held in the "Mystic River."

Three boys - Jimmy, Sean and Dave - are playing hockey on their street when the ball goes down a storm drain. With nothing else to do, they decide to scratch their names into some fresh cement just laid down to repair the sidewalk. Suddenly, an authoritative voice behind them demands to know what the hell they are doing and a man, with a badge and handcuffs on his belt, takes one of the boys, Dave, in his car "to tell his mother" what he did. The boy is not seen again for four days, until he escapes the pedophiles, and hides within himself, ever since, his horrific story. Now, 25 years later, the former friends are joined again when tragedy strikes and the daughter of one is brutally murdered in the screen adaptation of Dennis Lehane's novel, "Mystic River." Clint Eastwood caused quite a stir in the greater Boston area when he came here for principle photography of his interpretation of Lehane's tale. Wherever he went and set up his cameras was treated as a festive event and Mr. Eastwood garnered much good will. The result shows in his latest work as he takes the complex, psychological story and, with Brian Helgeland's script, tells the author's story. The horrors that young Dave experienced through his captivity has been indelibly imprinted on his mind and older Dave Boyle (Tim Robbins) lives with the nightmare every day. He goes to a bar, alone, one Saturday night and sees Katie (Emmy Rossum), his former friend Jimmy's (Sean Penn) daughter, celebrating with her friends. Later, two things happen: Dave returns home after 3:00 AM covered with blood. He tells his wife, Celeste (Marcia Gay Harden) a story about a mugger attack and that, possibly, he killed the man. Next morning, there is not a word in the paper about a dead, beaten body being found. There is a brouhaha going on with the police investigating a missing 19 year-old - Katie. The third of the friends, Sean Divine (Kevin Bacon) is a state police homicide detective assigned to investigate and is there when the girls battered and bloodied body is found. He must break the news to Jimmy Markum, with a promise to find the killer. The tail that Eastwood weaves is an intricate combination of emotions where Dave stopped living and began a tortured existence. Jimmy, an ex-con who was in prison when his wife died of cancer, came out of prison in mortal fear of his young daughter and grew to love and adore her, sometimes to the detriment of his second wife, Annabeth (Laura Linney) and their two younger daughters. Sean, too intensely involved in his job, pushed his wife away and has been estranged for six months. This victims-of-circumstance crime yarn betters the book in a number of ways. I never got the feeling that the book was based in Boston. It felt generic and Eastwood, with his locations, second unit photography and credible efforts getting Boston accents from his talented actors really puts the Bostonian spin on things. The actors give dimension to each of the characters they portray, down to the small cameo by Eli Wallach as an elderly liquor storeowner. Sean Penn is best as the volatile Jimmy who has a violent past and is willing to do deadly harm if he deems it the "right" thing. Tim Robbins does a decent turn as the troubled Dave, though he delivers it mostly with furrowed brow and furtive eyes. Kevin Bacon is adequate as detective Divine but, as in the book, his character is the least fleshed out of the three leads. Where "Mystic River" also shines is with its fine and large supporting cast. Laurence Fishburne gets notice as Sean's partner, Whitey Powers. Marcia Gay Harden gives a notable performance as Dave's wife Celeste, who is a catalyst for the events that transpire. Laura Linney, as Jimmy's wife, plays Annabeth well as the woman who knows that Katie was the most important thing in the world to Jimmy but makes damn sure, no matter what, he thinks of her and his two other daughters. Also notable are Kevin Chapman and Adam Nelson as the loose cannon friends of Jimmy, the Savage brothers. Techs are first rate all around and Eastwood directs cast and crew with a deft hand. It's a rare thing when you like a movie better than the book.