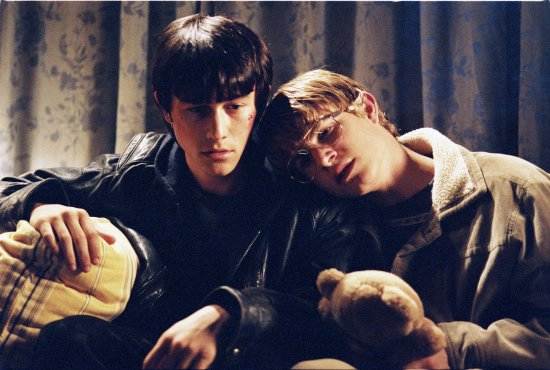 Since making a small splash with 1992's "The Living End," independent filmmaker Araki has continued to turn out fringe films with extreme subject matter to diminishing results. "Mysterious Skin," his first adaptation of a novel although still clearly of the Araki oeuvre, is a serious, if somewhat flawed, return to form. Brian, a studious young man living with a single mother (Lisa Long, "Legally Blonde 2: Red, White & Blonde"), begins to believe the only explanation for his troubled memories is UFO abduction. A television show on alien kidnappings introduces Brian to Avalyn (Mary Lynn Rajskub, TV's "24," "Legally Blonde 2: Red, White & Blonde"), another clearly disturbed person who fervently believes she's been the subject of alien experimentation. But Avalyn spurs Brian into further investigation of his earlier years. An old Little League photo leads him to Neil. Meanwhile we've seen Neil engaging in life as a male hustler unbeknownst to his single mom (Elisabeth Shue, "Hollow Man"). Neil's still close with his boyhood friend Wendy (Michelle Trachtenberg, "Ice Princess"), who thinks she understands his egocentric coldness and worries about his rashness. She warns their mutual friend Eric (Jeffrey Licon) not to fall for Brian. When Wendy leaves for New York City, Neil follows and it is Eric and Neil's mom who Brian meets and befriends until a traumatized Neil returns. Araki maintains a sense of dread throughout "Mysterious Skin," a feeling that something bad is either about to happen or be revealed. And make no mistake, some pretty ugly things happened to Brian and Neil at the hands of their Coach (Bill Sage, "Glitter," "Urbania"), an insidious pedophile who Neil remembers with love (and mom treated as a convenient babysitter) and Brian has repressed. What is so remarkable about the story is how differently the two boys react to the abuse and how far reaching one man's acts are. Joseph Gordon-Levitt is dynamic as the handsome hustler, afraid of nothing until he receives an awakening in the big city (and not necessarily when you may expect). Gordon-Levitt makes Neil's charm palpable while also keeping deep emotions at arm's length. His young alter ego, Chase Ellison, is equally remarkable, a beautiful, dark-haired boy who becomes too knowing too early. Corbet isn't as successful, perhaps allowed to put too much of a goody two shoes spin on Brian for contrast's sake. His younger self, George Webster, is a shattered cherub. Trachtenberg is OK as the savvy, hipster teen, stomping all over her "Ice Princess" image here. Jeffrey Licon gives an immensely likable, sweet performance as Eric, although Araki stretches credulity having him befriend both Neil and Brian in equal measure - Eric's too good to be true. The moms are also sharply contrasted, Long being the June Cleaver to Shue's boozing man eater - neither is memorable. Bill Sage is perfect as the handsome coach, making us feel unsettled as he oozes friendly paternalism. In a small role, Billy Drago ("The Untouchables") sets us up for an unexpected turn as one of Neil's johns. Araki gets so many things right, from the allure of an extravagant cereal variety pack to a small kid with a practical mom to the ways repressed events sneak back into the present. In one of the film's best scenes, Eric points out the disturbingly obvious - that the alien Brian draws wears baseball cleats. Araki's opening image is a beautifully surreal shimmer of color (cinematography by Steve Gainer, "A Dirty Shame") revealed to be nothing more than falling Fruit Loops. The sex scenes are generally accomplished with facial closeups, but are nonetheless extremely uncomfortable to sit through given their horrific nature. Yet Araki stumbles occasionally with a lack of subtlety and clunky execution. To find the name of the boy in that Little League photo, Avalyn dramatically smashes the glass to take the picture from its frame. We're given no motivation for Wendy's move to NYC where she maintains an apartment with a coffee shop job. Wendy warns Neil of the dangers of the big city and his first pickup couldn't be creepier. Still, "Mysterious Skin" is a memorable expose on sexual child abuse with a final soliloquy that is as brutally, uncomfortably distressing as it is liberating.

Gay-themed filmmaker, Gregg Araki, after a five-year hiatus following his 1999 film, “Splendor,” comes back to the big screen with his tale about two teenagers, sexually molested by their Little League baseball coach when just 8-years old. The story follows the boys, Brian (Brady Corbett) and Neil (Joseph Gordon-Levitt), and the way they have coped (or, not) with the childhood abuse in “Mysterious Skin.” Helmer Gregg Araki’s work, since I first noted him with “The Living End (1992),” has been an acquired taste outside of the gay community. In his adaptation of Scott Heim’s novel, Mysterious Skin, the filmmaker foregoes filming his own material and brings us a story of child sexual abuse, pedophilia, male prostitution, alien abduction and loneliness. Brian has wiped his abused past from his mind, replacing the sexual advances by his Little League coach (Bill Sage) with remembrances of alien abduction and anal probes. Neil had almost joyfully accepted the adult’s advances and remembers the incident as one of love and caring. As they further themselves from their confused pasts, each deals with it in his way. Brian blanked out the facts of his abuse with his alien abduction theory. Neil has turned to a life of male prostitution and hustling, paying no regard to the dangers and consequences of unprotected sex. When Neil takes his promiscuous lifestyle to New York to ply his hustling trade, Brian follows his friend in hopes that he will be able to somehow quell the demons that have haunted him for the past 10 years. What the pair finds in the big city will be the catalyst for change for both. Mysterious Skin” is a study in how the two main characters, Neil and Brian, cope with that dark incident from their youth. Brian is a basket case of insecurities and fear since the Coach had his way with him. Neil, on the other hand, felt that the experience opened him up to his true self as he cavalierly seeks sexual pleasure with no regard to his or others safety. Neil does not recognize the risks that he takes and his promiscuity certainly puts his life at risk. This danger is beautifully punctuated in a scene where Neil picks a suave older man (Billy Drago) who, as he takes off his shirt, proves to be in the throes of fighting AIDS. The scenario is tensely chilling but handled with extreme sensitivity and compassion. Mysterious Skin,” with its homosexual themes and sometime graphic sex, puts it into a niche that few outside of the gay community will likely embrace, which is too bad. Gregg Araki shows skill in adapting another’s work and he marshals his youthful cast with a deft hand. Joseph Gordon-Levitt is a standout, too.