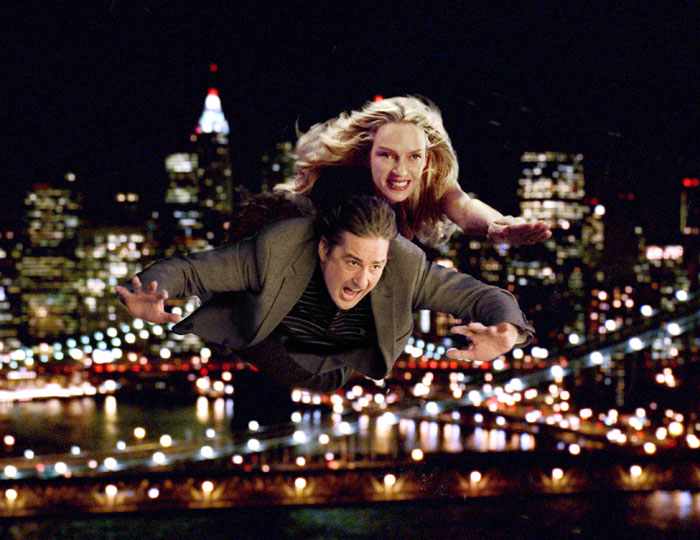 Matt Saunders (Luke Wilson, "The Family Stone," "Hoot") won't admit he's in love with his work buddy Hannah (Anna Faris, "Brokeback Mountain," "Scary Movie 4"), perhaps because she's dating a male model, so when the stunning Jenny Johnson (Uma Thurman, "Kill Bill Vols. 1 and 2") falls into his arms, he overlooks some warning signals - at first. After Matt's kidnapped by supervillain Professor Bedlam (Eddie Izzard, "Shadow of the Vampire," "Ocean's Twelve"), Jenny comes clean and admits to Matt that she is really the famous superhero G-Girl. Matt latches onto this bit of news as the explanation of all that's been wrong, but Jenny's jealousy upon meeting Hannah puts Matt over the edge. He doesn't know what he's in for from the woman he now calls "My Super Ex-Girlfriend."

Look at comedy director Ivan Reitman's filmography and you'll see that he's made exactly three good movies - two early ones starring Bill Murray ("Meatballs," "Stripes") and 1993's "Dave" - I won't take the time to argue the overvalued "Ghostbusters" now other than to say it's a real product of its time. His last film was the odious "Evolution." "My Super Ex-Girlfriend" is a step up, but he needed a bigger, super powered step. This is a comedy whose very first visual gag is overpowered by implausibility and whose 'heroine' is an unsympathetic wacko instead of being given the feminist revenge bent that might have worked. Television writer Don Payne clearly doesn't know how to extend character development outside the thirty minute time frame. His Jenny/G-Girl is needy, controlling, jealous and vindictive yet a high school flashback showing how she gained her powers reveals a happy nerd whose run in with a meteor gave her confidence and sex appeal. As if this weren't schizophrenic enough, the filmmakers clearly expect us to snap to and like the woman who almost boiled a pet ("Fatal Attraction," anyone?) when another chump comes along who can adore her and therefore make her 'nice' again. Come on, guys - at some point male comic excess turns into misogyny (or outright stupidity). Uma does her best to work some cringe-worthy moments, like G-Girl's stubborn tantrum about responding to a missile headed to obliterate New York City, but the material flattens her. She does a good job swinging moods in a heartbeat but generates no love for the character, except whenever The Bride peaks out. Luke Wilson's OK as the laid back schmuck, enough so we don't believe he deserves his fate and he's got some nice spark with the talented Faris, so used to making silk from sows' ears with the "Scary Movie" franchise. Izzard is a welcome sight, even if his character is yanked right out of "The Incredibles," as is Wanda Sykes ("Monster-in-Law"), given even less to work with. Rainn Wilson (TV's "The Office") has a few moments as Matt's horndog best buddy. "My Super Ex-Girlfriend" showed its weaknesses in its ad campaign - those early, short teasers made it look cute, but when the studio began to reveal all its gags, especially that super shark one, you just had to know you'd already seen the best the movie had to offer.