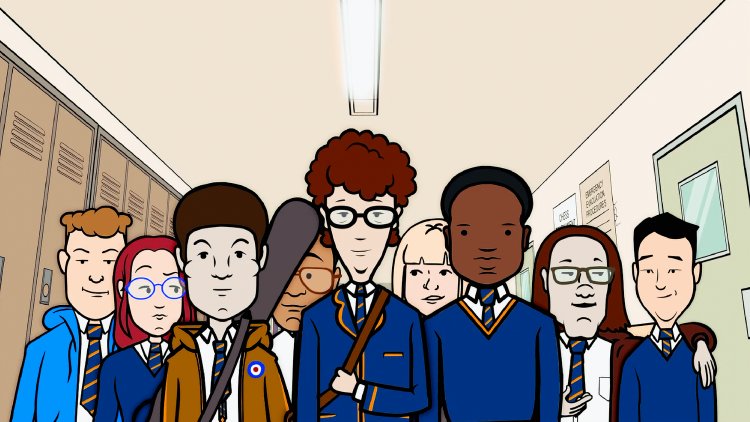 In 1993, the 5th form class (junior/senior high school level in the U.S.) of Glasgow’s Bearsden Academy was stunned by the new student who arrived at their door.  He looked older than them, tall, gaunt and pale with tight, wiry curls, a mask-life face, a formal uniform and a briefcase.  Even his name, Brandon Lee, was strange, the same as the star of “The Crow” who was recently killed accidentally on set.  But after an awkward beginning, the unusually bright young man began to make more friends after a successful run as a star of the high school play, many of whom still regard him fondly after a shocking revelation in “My Old School.”

The story may be well known in the UK, where it became a media sensation in the 1990’s, but it should be a surprise to U.S. audiences.  But while it is indeed a great example of the old ‘truth is stranger than fiction’ saw, McLeod’s film works far better in its secondary goal, his positively charming current day class ‘reunion’ recollections, than it does in its primary, where he belabors his efforts to maintain suspense, over milking his cow.

The film begins by establishing its unique environment, an old fashioned school looking like a factory with mold on its walls that sits in what is considered a posh neighborhood.  Brandon is introduced as the son of a Canadian opera singer who traveled with his mother on tour until she was killed in a car accident which resulted in burns to his face.  He now lives with his grandmother in ‘Spam valley,’ the part of Bearsden where folks are said to eat the canned meat every night in order to afford to live there.  Brandon has a single-minded focus on going to medical school and becoming a doctor.

McLeod features his fellow classmates sitting behind school desks singly and in groups of two, all giving their takes on Brandon.  He changed the life of the only black kid in class, Stefen, befriending him and stopping the bullying which had plagued him.  The self-described ‘second most socially awkward’ was thrilled to be out of the spotlight, then connected with Brandon through a love of music.  Brandon liked seminal 70’s/80’s bands like Joy Division, Television and Red Lorry Yellow Lorry, sophisticated tastes which opened classmates’ minds.  A teacher impressed with Brandon’s intelligence pushed him into auditioning for ‘South Pacific,’ and despite the fact that he refused to kiss his costar during rehearsals, his performance was a hit.  He began to have parties at his house.  Then his classmates discovered he could drive and a whole new world was opened, although there was that odd night when he confessed to having a different name on his license when he thought he was about to get pulled over by the police…

Once the curtain has finally been drawn back, the filmmaker treats subsequent revelations, which are all too obvious to anyone who’s been paying attention, with the gravitas of the ‘My sister. My daughter.  My sister’ sequence from “Chinatown” and it begins to try one’s patience.  After teasing a look at the real Brandon, the final act of the documentary features a lot of video from the time, including a recording of that play which reveals a surprise to absolutely everyone (and is one of the main concerns among those who mostly remember him fondly).

“My Old School” tells a fabulous story with wit and warmth.  Bearsden Academy’s 5th form of 1993 looks ripe for one hell of an in-person reunion.

In 1993, a 16-year old student named Brandon Lee arrived for his first day of school at the prestigious Bearsden Academy outside of Glasgow. He has a story of being home schooled in Canada by his opera diva mom, who died recently, and he moved in with his Scottish grandma. Soon, the enigmatic Brandon becomes the academy’s BMOC in “My Old School.”

This an odd concoction of a “true” story that combines animation, a collection of talking head interviews and an unusual use of lip-syncing, done by Alan Cummings, of the main subject’s own recorded interviews. Director/writer Jono McLeod takes this mixture of venues and tells the story of Brian MacKinnon/Brandon Lee and it is a weird one.

I am not sure how much to give away on this bizarre tale of deception and lies, so let me think about it…

OK, here’s how I am going to do it. Brandon Lee appeared at Bearsden tall, lanky with a mop of curly hair claiming he is the orphan of a famous opera star. His story is told primarily via animation as he insinuates himself among the students and faculty. He stands up for the bullied and excels at his studies with plan to go to medical school and become a doctor.

At about the halfway mark, director McLeod lowers the boom and McKinnon/Lee’s real story comes to light and this is where I will stop and let you find out for yourself. I think you will be surprised how things turn out – though the heroes of “My Old School” are not who you think.

Magnolia releases "My Old School" in select theaters on 7/22/22.