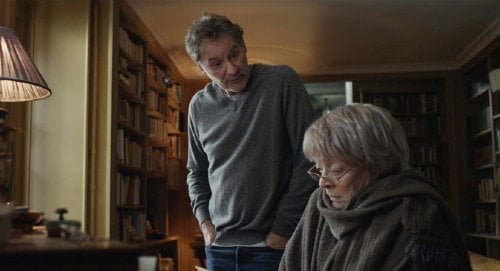 Mathias Gold (Kevin Kline) has nothing to show for his almost six decades on earth, but when he inherits an enormous Parisian apartment from his estranged father he thinks his luck has turned. Arriving to inspect the home before selling it, Mathias is stunned when he's informed by his unknown tenant, Mathilde Girard ('Downton Abbey's' Maggie Smith), that the apartment is 'en viager,' the French equivalent of a reverse mortgage with the buyer as bank, and not only can Mathias not sell it while the 90 year old woman is alive, he must pay her 2500 Euros a month in "My Old Lady."

Playwright Israel Horovitz adapts his own work for his feature directorial debut, but the pleasures of his film are delivered more by the interplay of his three lead actors than his story. What begins like a cutesy Lasse Hallstrom picture quickly morphs into heavy drama when Mathias learns just who his 'old lady' is, a woman whose ties to his family has been the source of emotional grief all his life. Mathias has a counterpart in Chloé Girard (Kristin Scott Thomas, "Only God Forgives"), Mathilde's daughter, whose parallel experiences makes her the first person who is able to understand him. Horovitz's hook of the viager is a good one, perhaps inspired by a 1995 case where a 47 year-old investor bought an apartment from a 90 year-old woman for a low price combined with monthly $500 payments only to be outlived by the woman, who was 120 on the day he died. Throwing an American unfamiliar with this ancient French real estate custom is a great means to comic frustration. But instead Horovitz mines family pain and his path to resolution, and eventual romance, doesn't always feel true. Smith is, as usual, terrific as the crafty old bird, who, in addition to her monthly stipend, cons Mathias into rent as well. Her and Kline's early exchanges are hilarious. As the story progresses, Mathilde is forced to face unpleasant truths but although Smith shows genuine shock and concern, the script paints her as unrepentant to the point of lunacy, at one point even condoning incest. For his part, Kline's Mathias is a mess - broke, suicidal, alcoholic - yet his gradually shared history with Chloé sparks romantic feelings (the film's loveliest line after Chloé expresses herself too old for beauty - 'a perfect flower is nearly old'). Still one wonders just how enjoyable it really is to kiss a man who's been swilling wine from a bottle for the past 24 hours. Yet Scott Thomas is good enough to almost make us go with it. In Horovitz's world, redemption and forgiveness come about too quickly, but so much of his dialogue really sings in the hands of Smith and Kline. His play has been opened up onto the streets of Paris, most delightfully along the Seine where Kline engages in an impromptu opera aria with a stranger and visits realtor Monsieur Lefebvre (Dominique Pinon, "Amélie," "Delicatessen") in his home on a barge. Stick around for the end credits where an additional scene answers a question about the film's resolution. Grade: