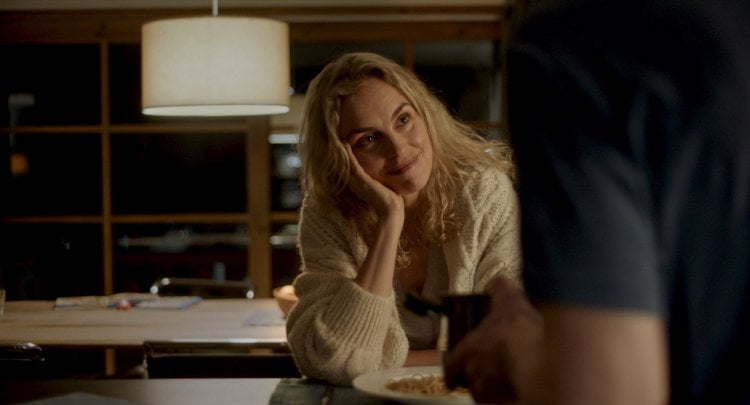 After receiving a bone marrow transplant from his twin Lisa (Nina Hoss, "Barbara," "Phoenix"), Sven (Lars Eidinger, "Everyone Else") crashes David’s (Thomas Ostermeier) rehearsal for their production of ‘Hamlet,’ nailing the performance his understudy is struggling with.  But while it is clear to David that Sven won’t be returning to the stage, Lisa, a playwright who hasn’t written a thing since her brother’s cancer diagnosis, is inspired to gift him with a brand new role as she puts everything else about her life on the line in “My Little Sister.”

Writer/directors Stéphanie Chuat and Véronique Reymond have translated their long term friendship and love of the Berlin theater scene into a moving character piece about the fierce bond between siblings who relied upon each other growing up with theatrical parents while forging their own path in the family’s chosen art world.  While Eidinger rages against the dying of the light until his body betrays him, it is Hoss, the titular sister, whom the filmmakers concentrate on.  The actors are well cast physically as siblings, but it is their performances which convince us of the interdependence of their lives, well supported by Marthe Keller ("Bobby Deerfield") as the irresponsible, unmaternal parent whose behavior sheds a lot of light on their united front.

Sven’s serious illness finds his sister at multiple crossroads.  While they are rooted in the Berlin theater world, Lisa’s husband Martin (Jens Albinus, "Nymphomaniac: Vol. I") wishes to accept a five-year contract to continue running the music program in the prestigious Swiss school they moved to Leysin for, temporarily thought Lisa.  Lisa’s devotion to her brother and his care gives Martin cover to make solitary decisions which further exacerbate their tensions, their young children Linne-Lu (Linne-Lu Lungershausen) and Noah (Noah Tscharland) becoming objects in a tug of war.  Lisa even finds herself fighting reality as she tries to convince David to produce one last play for Sven, the new one she’s written based on Hansel & Gretel.

Eidinger, who covers his character’s hair loss with a series of multi-colored and asymmetrical wigs like a kid playing dress-up, doesn’t have to stretch portraying his actor alter-ego, having performed Hamlet extensively on the Berlin stage himself.  His Sven is a mixture of passion, play and panic as we witness him raucously enjoying his niece and nephew, wryly commenting upon a gift shop’s wares or drinking and dancing until he drops in a gay nightclub.  The joy expressed in sledding with his sister is contrasted with the anxiety of hang gliding with his brother-in-law, both activities gorgeously photographed against the alpine landscape.  As the figure in between them, Albinus portrays Martin as an opportunist, one expecting a traditionally supportive wife while utilizing her artistic accomplishments to burnish his own image.  It’s a subtly sly performance suggesting this was a marriage in trouble well before Sven’s illness, just as Keller’s horrifically inappropriate mother paints a picture of Sven and Lisa’s childhood.  But “My Little Sister” is Hoss’s film and she carries it with ferocity and grace.  Her Lisa is devastated by the idea of losing her lifelong ally, but it is this loss that refuels her creative spark, giving her the strength to carry on.

“My Little Sister” celebrates creative artistry and the love and friendships which support it.  For a film which features the ravages of cancer on one of its primary players, it leaves us on a spiritual high.

For information about theatrical and virtual playdates, click here.