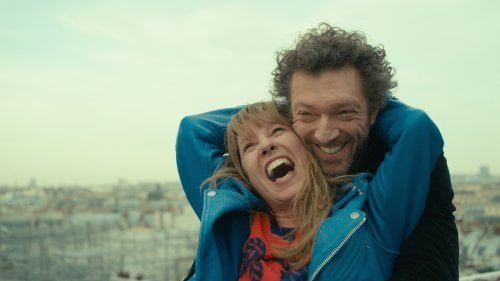 Tony (Emmanuelle Bercot) is on a skiing holiday. She heads down the slope going far faster than she should, has an accident and must undergo long and painful therapy. During her rehabilitation, she reflects back on her past, especially with Georgio (Vincent Cassel) a charming sociopath with whom she had a turbulent life in “My King.”

Cowriter (with Etienne Comar, "Of Gods and Men")/director Maïwenn's ("Polisse") latest begins with a woman, Tony (Emmanuelle Bercot, "Polisse"), in rehab after a devastating skiing accident. Her therapist asks her to think about the possible metaphysical reason for her injury. In flashback, Tony revisits her 10 year relationship with Georgio (Vincent Cassel, "Black Swan," "Tale of Tales") in "My King." The closing night film of the 21st Boston French Film Festival ends with a similar theme to its opening night film, "Fatima," which also suggests a woman may have caused her own injury as a way of handling a stressful situation. When Tony first meets Georgio, he's passionately romantic. The only early fly in the ointment is Agnès (Chrystèle Saint Louis Augustin), a woman who accuses Tony of having stolen her man. But as the years pass we see that Georgio can be cold and manipulative, perhaps even sociopathic, especially as he devotes himself to Agnès's crisis during Tony's late pregnancy. Bercot, who cowon Best Actress (with "Carol's" Rooney Mara) at the 2015 Cannes Film Festival, takes an arduous emotional journey. Cassel surely gave Vincent Lindon a run for his money for the Actor prize, never better as a man who can make a woman feel like she is his entire world, yet thrives on the adulation of many. (The film also stars Maïwenn's elder sister, Isild Le Besco ("À Tout de Suite") and Louis Garrel ("Saint Laurent") as the couple's best friends.) Maïwenn has become a powerful filmmaker. Grade: