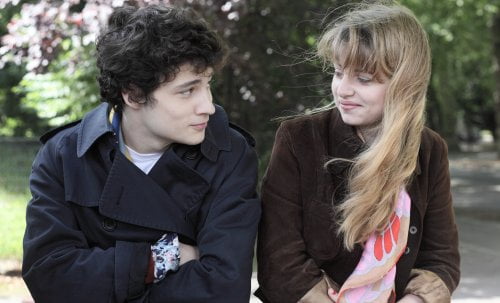 In Tajikistan, anthropologist Paul Dédalus (Mathieu Amalric) contemplates returning to his home town of Roubaix in France. 'I remember, I remember...' he says as he dives into three seminal periods of his youth in "My Golden Days."

Cowriter (with Julie Peyr, "Jimmy P.")/director Arnaud Desplechin ("A Christmas Tale," "Jimmy P.") returns to the alter ego he first introduced in "How I Got Into an Argument ... (My Sex Life)" (which also starred Amalric) for an immersive coming of age tale full of insight about how our pasts inform our present. Newcomers Quentin Dolmaire and Lou Roy-Lecollinet shine as the young Paul and the love-of-his-life Esther, who illustrate all the pain, wonderment, longing and self delusions that can accompany a long term love affair. In the briefest chapter of Paul's remembrances we witness a young boy adamant about his disturbed mother's (Anne Benoît, "Farewell, My Queen") place in his life, barring her from his bedroom before moving to moving in with his Aunt Rose (Françoise Lebrun, "Séraphine"). The young Paul has no sympathy for his father's depression either, and when we eventually hear Abel's (Olivier Rabourdin, "Midnight in Paris") explanation of his marriage, we can see how it impacts Paul's own relationship choices later in life. During Paul's journey, he's detained at Customs due to a passport anomaly. Apparently there is another passport issued to a Paul Dédalus and while at first he tries to deny knowledge, the investigator pushes - this Paul also has the same birth date. And so we go back to Paul's early high school years, when he had quite the adventure with his friend Marc Zylberberg (Elyot Milshtein) when they both travelled to Russia on a high school trip. This second, longer, flashback reveals a somewhat naive but good-hearted Paul, who agrees not only to help his friend deliver a package to Jewish Refuseniks, but leaves his passport behind, enabling another boy his age, his 'twin,' to escape repression. The whole is shot like an espionage thriller, with a running clock and several close calls. Desplechin adds a layer of melancholy with the knowledge that shortly thereafter Marc's parents moved and Paul lost contact with a friend who had inspired him, leaving us to wonder what a different path his life might have taken. The third, lengthiest chapter is 'Esther.' When Paul returns from college to visit his old pal Kovalki (Pierre Andrau), he takes note of the beautiful blond giving her number to a guy. His sister Delphine (Lily Taieb) tells Paul to forget it, but when they all leave, he approaches the young woman with a most refreshing admission about his lack of interesting qualities while she arrogantly counters that her known effect on men will mean that he never forgets her. But apparently, she's hooked, purposely crossing paths with Paul until they eventually become a couple. For the next ten years. But having shed her seductive ways after realizing a real relationship, Esther cannot bear to be left alone and Paul is a poor student scraping by in Paris. By the time we return to the adult Paul in the present, a run-in with Kovalki (Eric Ruf, "Nobody Else But You") exposes the raw wounds left by this most recent past. Desplechin's film isn't neat and tidy. Instead it bounces around, touching on some things, like Paul's brother Ivan's (Raphaël Cohen) plans to rob a bank, diving fully into others (he also uses devices like iris slows and split screen for a while, then abandons them). Paul's college life is here - he enjoys a unique relationship with Professeur Behanzin (Eve Doe-Bruce) - but we don't get the amount of detail we do with Esther. Much like memory's relationship to dreams, there is a lot that's dumped out here, some things taking priority, others making brief yet significant appearances. We may never understand Paul's drive towards anthropology, or the extremity of the adult Paul's outlash at Kovalki, but with "My Golden Days" we do understand how people pass in and out of a life over decades, shaping and haunting it. Grade: