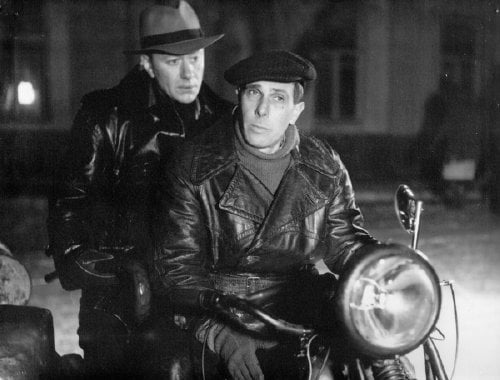 In 1985, a man recalls the people he lived with, communally, fifty years prior, just as Stalin's reign of terror was taking hold. Through the eyes of nine-year old Alexander, we meet his father, two policemen and the 'landlady' he lived with in a rural town. Two arrivals - that of an agitprop theater group and a writer distraught over the loss of his wife - spark a love triangle with Alexander's preeminent memory, "My Friend Ivan Lapshin."

For his third singularly directed film, Aleksei German ("Trial on the Road") turned to the last novel written by his father, Yuri (adapted by Eduard Volodarskiy), to create a before and after look at Soviet life. The film is challenging, German playing with time, film stocks and shooting styles, his cinema fractured to give the abstract impression of distant memories. Small details are exaggerated while larger themes are hidden in the crevices, yet German turns to a linear, more artfully shot style at the midway point, allowing the viewer to pull the strands together. As the latter half deals more with Lapshin's hunting of the brutal Solovyev gang, perhaps the narrator has turned more to written accounts. The film begins with memories Lapshin's 40th birthday celebration in cramped quarters. Fascist Italian pilots in Messerschmitts are parodied for the child's amusement. Babooshka Patrikeyevna (Zinaida Adamovich) serves food, cleans up and complains about sugar consumption. German employs artless zooms into and out of the action (in black and white - present day is represented in color). Vasili Okoshkin (Aleksei Zharkov, "Prisoner of the Mountains") speaks of leaving with Ivan Lapshin (Andrei Boltnev) for the gold fields. Later, though, Lapshin approaches newcomers in the town square and frightens away a horse-driven cart trafficking in stolen firewood. 'This is where it all began' we're told and two things begin - Lapshin falls for actress Natasha Adasova (Nina Ruslanova), who asks him to introduce her to a whore so that she may research her character. He also begins to pick up the trail of Solovyev. Later events include the arrival of Lapshin's journalist pal Khanin (Soviet comedian Andrey Mironov), suicidal over the loss of his wife (although his attempt is vaguely comical), who becomes the sixth to live in Lapshin's digs and the object of Natasha's unreturned affections. Lapshin's advances are spurned ('It would have been so nice'), the play is roundly panned (Adasova falls on stage) and Lapshin recovers from a bullet wound, yet, we are told, was never treated for the shell shock he endured. The tracking of Solovyey is dynamically photographed with sharper images by cinematographer Valeri Fedosov and we see a colder version of the Lapshin we've come to know. German acknowledges the end of an idealistic era with the arrival of the train that will take Lapshin for training, its engine adorned with a huge portrait of Stalin as bands play in the background. "My Friend Ivan Lapshin" takes a bit of work to follow, especially in its early goings, and German's work may be more specifically targeted to Soviet, rather than global, audiences (the movie is largely considered one of the, if not the greatest, of Russian films). I know I've seen Soviet films which had a greater impact on me overall, but once what German's trying to do sinks in, Lapshin becomes a potent symbol of the Stalinist era. The film ends back with the (unseen) narrator, a color view of the town showing something much changed, bigger but perhaps not better.