My Father, My Lord 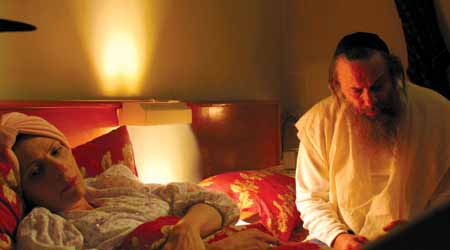 Young Menahen (Elan Griff) is the apple of his father’s, Rabbi Abraham (Assi Dayan), eye. Even under the strict guidelines of the Torah, Reb ? unabashedly loves his son and his faith is tested when tragedy strikes the tiny family in “My Father, My Lord.”

Writer-director David Volach gives us a modern retelling of the biblical story of Abraham and Isaac (Genesis: 22). Abraham is a devout and scholarly rabbi and his dedication to God surpasses any other earthly responsibilities, including his young son and delicate wife, Esther (Sharon Hacochen Bar). One fateful day when the family takes a holiday, Abraham is more interested in arguing the Talmud with his fellow scholars than spending the family time with Meacham. Little boys find things to entertain themselves and Meacham is no exception. The result will devastate Abraham and Esther. My Father, My Lord” is a finely crafted character study of a man consumed by his religious zealousness but loses the earthly thing that he loved most. Abraham, like his biblical doppelganger, became a father late in life and spent many years, before becoming a father, as a rabbinical scholar. His ingrained faith and trust in God is dramatically tested and he is a changed in ways he never expected. Assi Dayan gives depth and nuance to his Abraham. I was not familiar with David Volach’s work and, after the film played itself out, I thought “My Father, My Lord” a mature, thoughtful flick by an experienced filmmaker. Much to my surprise, while writing this review, I found out he is a newbie! This is an impressive debut that shows the ability to adapt the biblical story that took place thousands of years ago and update it to modern times. It is good boding and I look forward to watch this promising career. My Father, My Lord” is a simple story about simple people who try to live their lives under the approving eye of their God, a both benevolent and harsh Lord. The believable, full performances of the principal three characters touch the heart and the tragedy hits home. This gentle and delicate film uses character, environs and story to create a touching story.