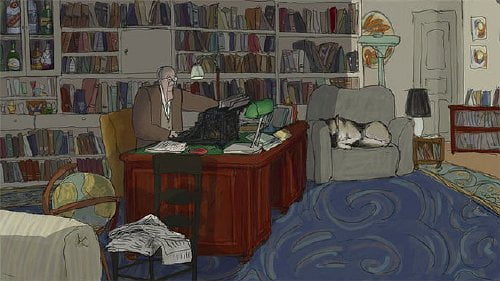 "Unable to love each other, the English turn to dogs." J.R. Ackerley

Joe Ackerley (Christopher Plummer, "Up's" villain, "The Imaginarium of Doctor Parnassus") worked for the BBC and wrote novels such as "We Think the World of You," but he didn't have a satisfactory personal life or partner until one day, he rescued an Alsatian whose owners paid it little attention and kept it penned in a yard. The 18 month old dog would spend its next fifteen years with her new master and be immortalized in his book "My Dog Tulip." Codirector/animators Paul and Sandra Fierlinger (Paul adapted J.R. Ackerley's 1956 novel) have taken a very adult period piece, one that expresses sadness, joy and the often profound thoughts of a single gay man in postwar Britain, and brought it to life with autumnal pen and ink animation which morphs into colorless storyboarding to express ideas and lined paper doodles to illustrate the author's more fantastical imaginings. This is a highly individual piece of work, one that doesn't subscribe to sentimentality but which looks at a relationship with a dog through its both its emotional, and, more particularly, its bodily needs. Present day pet owners may sometimes be repelled at the notion of dog ownership that does not only exclude leash laws and pooper scoopers, but mating for an animal's 'happiness,' with no thought to the subsequent responsibility. There is a darkness to "My Dog Tulip," but Ackerley's closing words, brilliantly voiced by Plummer, redeem its author's failings with his acknowledgement and awed appreciation for a lifetime of devotion. It's a little unclear how Ackerley was connected with the family whose dog he took on, but he immediately recognizes his new pet's disconnection from the world and attempts to right it. He needs assistance to get Tulip on the train, the dog terrified by its thunderous approach, and laughs when Tulip cannot distinguish between a puddle and actual body of water, diving in only to be shocked at the result. He equates Tulip's new found love of the outside to Heaven and the animators show the dog literally flying out of an open door. In an attempt to find a vet, we learn that Alsatians are difficult - for those who predispose them to be so. With two unsuccessful attempts, Joe finds Ms. Canvenini (voice of Isabella Rossellini), a vet with a velvet touch and the animal insight to advise him that it is he who is Tulip's problem and how to reduce her anxiety. Joe invites his sister Nancy (voice of Lynn Redgrave, to whom the film is dedicated) to stay with them so that Tulip is not alone so much of the day and becomes embroiled in a sibling rivalry over the dog's affections which, he learns, were never in question. He also finds that invitations to the country drop away once Tulip has become his companion and one last one, from an old army buddy, shows why. The large part of the film's second half is given to Joe's attempt to mate his dog and his attempts to keep unacceptable parties away when she's in heat. There are several unsuccessful tries with the Alsatians of some rather strange owners whose sex lives Joe imagines after watching the dogs rut. (This reverie leads to him finding that one part of every couple is the dog in the relationship.) The filmmakers make no overt mention of Joe's sexuality (in fact, Ackerley's Alsatian was named Queenie, but his publishers feared a homosexual backlash and renamed the dog for publication), but it can certainly be intuited. London class divisions are apparent in some of Joe's behavior which may seem repellent through modern eyes - his retorts to a bicyclist who objects to Tulip's sidewalk defection or his expectation of thanks from the greengrocers whose sidewalk he's cleaned after another infraction (the filmmakers have no qualms about animating Tulip creating her waste). Joe's worst offense is chilling on multiple fronts, not least because it is a betrayal of his most loyal friend, but Tulip states her displeasure with a purposeful deposit and Joe is shamed. "My Dog Tulip" is definitely not a film for children. It's like finding an old illustrated New Yorker story in the back of a bookcase filled generations ago and is all the more moving for Joe's clear-eyed recognition of animals' baser instincts.

Joe Ackerley is a middle-aged author who comes to the rescue of an 18-month old Alsatian bitch and takes her away from an abusive life. He loves the dog but she is a handful, always barking and is very hard to control. Over their years together, Joe grew to know, thanks to the help of a kind female veterinarian, “My Dog Tulip.” This is a from-the-heart anime, based on J.R. Ackerley’s 1956 novel, by feature film newcomers Paul Fierlinger and Sandra Fierlinger. The simple 2D animation is a plus for this sentimental story about a man and his dog. Taking place during the years following World War II, “My Dog Tulip” is a lovely story about a lonely writer who wants a friend and finds one in a most unanticipated way. Voiced by Christopher Plummer, Joe is setting foot on virgin ground when he takes in Tulip. He never had a pet before and makes mistakes raising his new ward. It is an honest, truthful story and the filmmakers capture it perfectly. This is an adult film that older kids may like. Beware, though, that a great deal of run time is spent on Joe trying, ineffectively, to mate Tulip with one after another Alsatian. Knowledge of the birds and the bees is a must for younger audiences. Joe and Tulip have other harrowing adventures when a stranger tells him that she has worms. He takes the excitable, protective Tulip from one vet to the next with each showing a cruel streak and not loving animals. That is, until he meets Miss Canvenini, a veterinarian who does love animals and advises Joe that Tulip’s excess excitability is due to her desire to love and protect her master. I love a good man/boy and his dog story. I get teary eyed just thinking about “Umberto D’” and got all choked up when I recently watched again, for the first time in 50 years, the Disney classic, “Old Yeller.” “My Dog Tulip,” while it has its tense moments, is more a love homage by the author for his adored pet. Anyone who has owned a dog (or a cat, yes, a cat) will have tender feelings for “My Dog Tulip.”