My Date With Drew 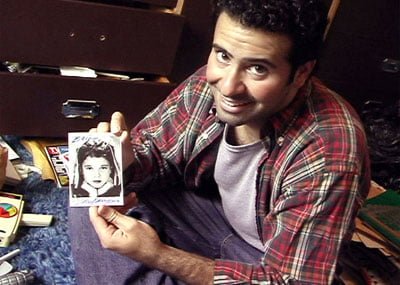 Hollywood outsider Brian Herzlinger has had a crush on Drew Barrymore since he saw "E.T." when he was six and she was seven. As an adult, he's worked a series of entry level jobs in the entertainment industry, but when he wins $1,100 in a television game show coaching teammates to the correct answer - Drew Barrymore - he's inspired to turn his puppy love into a career-building quest. Aided by friends and coproducers/codirectors/coeditors Jon Gunn and Brett Winn, as well as Circuit City's no questions asked thirty day return policy, Brian gives himself thirty days and budgets his game winnings to make a documentary out of what he hopes to call "My Date With Drew."

Herzlinger's gamble is part filmmaking calling card, part personal dream and he proves that given enough persistence and desire it is amazing how much one can guide one's own fate. This little ninety minute DIY video production is well paced and sharply edited, and although Brian himself has a tendency to become grating, he is ultimately redeemed by his own subject. After purchasing the video camera the filmmakers intend to return (Circuit City has seemingly set itself up as a free rental house for aspiring directors), Brian spends his first few days validating his idea with friends like director Bill D'Elia, who thinks it stinks, to a former Cruise/Kidman assistant who likes it. The threesome begin to work their way towards Drew using a 'six degrees of separation' method as they count down the days and give occasional budgetary tallies. The goal is to find a link to Drew, but their fallback, working with Dylan the limo driver, is the upcoming "Charlie's Angels 2" premiere. Brian wants to avoid Plan B at all costs, as he had actually been invited to the original film's and froze within one foot of his idol. As Brian and producer Kerry David continually try to contact Barrymore's production company, Flower Films, with a movie trailer (made with the donated talents of voice over maestro George DelHoyo) to no avail, Herzlinger's team scores him meetings with "Charlie's Angels" screenwriter John August, who thinks he has a shot but cannot help, actor Eric Roberts (costarring in a movie with former Barrymore costar Andy Dick, who doesn't want to over expose himself), who advises him to start working out and Drew's first cousin who says she's heard Drew is extremely nice but has never met her. And interviews like the latter are so obviously manipulative as clearly this information would be known before the camera rolls, just like the drama of Brian picking up a check at the post office before it closes is manufactured. Corey Feldman adds some 'C' list entertainment, but does nothing to propel Brian's cause, on Day 20 no less, and it is a wonder Dylan the limo driver didn't get fired over all the phone calls made to his dispatch center. The film becomes more honest again as the deadline approaches and Brian's friends ensure that he makes direct contact, if not procuring a date. The reenactment of the celebrity encounter radiates with the geeky joy inherent in meeting one's idol and not being let down (I can speak from experience, having been delighted meeting a rock star I idolized myself many years ago). The film's final act is a roller coaster of highs and lows, proving the old saying about finding what one wants when one least expects it. Herzlinger, who resembles "Queer as Folks'" Hal Sparks if he were more hirsute and continually on uppers, suffers a bit when 'acting' as himself as opposed to just being himself. Staged sequences, such as experiments with body waxing and Rockyesque training montages, when the camera is being directly addressed, don't come off nearly as well as purely observational ones, particularly the film's buoyant finale. Coproducer Jon Gunn is a frequent, amiable presence and producers' SOs Lisa Furst and Pam Levin also add an exuberant dose of spirit. Technically the film frequently suffers from the subpar sound produced with an in-camera mike, but the visuals themselves are mostly first rate and have been expertly assembled. Original closing credit song, "(I'd Have It All) If I Had Drew," is at least as good as those usually nominated by the Academy for Best Song. "My Date With Drew" is a cute project which reflects both the castle walls of Hollywood celebrity and the common man's generally helpful attitude. It will be interesting, though, in light of its depictions of security breaching and lovesick Internet advertisements, to see what it spawns.