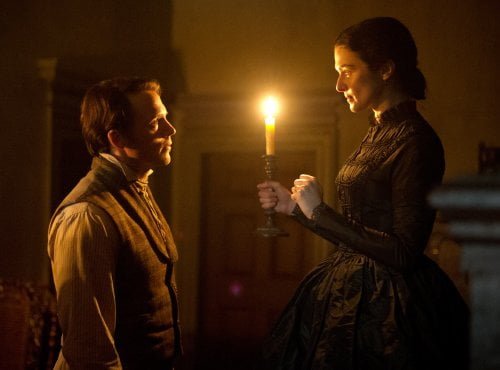 Philip (Sam Claflin) was taken in by his older cousin Ambrose when orphaned as a boy of seven and there bond is deep. Ambrose’s health, though, requires him to go to warmer climes during the cold, raw English winters. On his latest trip to Italy, he writes to Philip and declares that he has fallen in love with and married “My Cousin Rachel.”

When he was orphaned as a young lad, Philip (Sam Claflin, "Me Before You," "Their Finest") was taken in by his cousin Ambrose, the two growing very close. After failing health sends the elder Englishman to Italy on doctor's orders, he continues to write to his young charge, telling him of a wonderful woman he's met and married. But Ambrose's correspondence soon grows troublesome, calling his wife 'his torment,' begging Philip to come quickly. Philip arrives in Italy too late, Ambrose dead and his wife gone. Upon his return to the estate which will become his on his twenty-fifth birthday, Philip learns Ambrose's wife is now in England and will be visiting, but he has already condemned the woman he calls "My Cousin Rachel." Writer/director Roger Michell ("The Mother," "Le Week-End") adapts the Daphne Du Maurier novel for a new generation, his sumptuous production the film's strongest asset. The 1952 adaptation suffered from having been shot entirely on 20th Century Fox's studio lot, yet its stars, Olivia de Havilland and Richard Burton, shone more brightly. This would have seemed to be a perfect vehicle for Rachel Weisz, yet while she's good, there is something too modern about her and Claflin's performances, de Havilland and Burton's style more suitable to the story's nineteenth century time period. Still, new audiences should be swept away by the passion and mystery of this cleverly constructed tale of mistrust. Everything Philip knows about Rachel Ashley points toward her guilt, from his dying cousin's suspicions of poison to her reputation (he discounts an Italian medical examiner's verdict that Ambrose died of a brain tumor, one which could have caused uncharacteristic behavior). Upon news of her arrival, he instructs his manservant Seecombe (Tim Barlow, "Hot Fuzz") to hold dinner for his return, rudely timed to inconvenience his guest. He's surprised to discover she's retired for the evening, but while he's eating Seecombe delivers a message that she will receive him in her room after he has supped. The woman who presents herself to him is thoroughly unexpected, stunning despite her widow's wear, already beloved by the house dogs. She's worldly, irreverent and alluring and Philip finds himself utterly smitten. No one is more stunned by this turn of events than Louise Kendall (Holliday Grainger, "Cinderella," "The Finest Hours"), the daughter of Philip's godfather Nick (Iain Glen, "Eye in the Sky") who is the legal guardian of Ambrose's estate. Having grown up with Philip, Louise has long been assumed his future bride, apparently by everyone but him. It was the kind-hearted young woman who transformed his home from the badly neglected male abode to one of feminine respectability in anticipation of Rachel's visit. Nick, too, gently tries to steer Philip towards caution as the young man begins to gift Rachel with cash (which she quickly goes through) and a much cherished heirloom from the estate he is not yet at liberty to give. Then there is the Italian herbal tea Rachel is always brewing from contents kept in a black bag, not to mention the Italian, Rainaldi (Pierfrancesco Favino, "World War Z"), she meets in secret at a local inn. On his twenty-fifth birthday, Philip does something remarkable, only to face an unexpected, public blow. Then he falls feverishly ill... Weisz is perfectly cast as the desirous, older woman with Italian heritage who keeps shifting our perspective on Rachel's innocence, yet Michell's adaptation allows her less restraint, blunting the character's mystery. But Claflin is too callow for an educated man in his early twenties, too puppyish. The film excels in its lush production, West Horsley Place transformed, first into a ramshackle male domain right out of "Wuthering Heights," then into a cocoon of rich brocades and gleaming wood (production design by Alice Normington, set decoration by Barbara Herman-Skelding) set within a verdant landscape by a roaring sea. Costume designer Dinah Collin ("United 93," "Hyde Park on Hudson") excels, Weisz's mourning clothes adorned with lace veils and exotic trinkets, Louise's dress simple country floral accented with the burgundies of the Ashley estate. Philip wears the rougher dress of a working country squire whereas Rainaldi's clothing is more sophisticated. Rael Jones' rich orchestral score adds to the film's mystery, employing piano, woodwinds and a signature clarinet for Rachel. Michell's adaptation adds a coda which sways the viewer on Rachel's guilt or innocence. It's a cheeky finale to a beautifully made film which, alas, fails to be the definitive one. Grade:

This is just the second feature film adaptation of the Daphne Du Maurier 1951 novel; the first version, starring Olivia de Havilland, in the title role, and Richard Burton, was originally directed by George Cukor who was replaced under conflict by Henry Koster. The new “My Cousin Rachel” is adapted and directed by Roger Michell.” In this outing, Rachel Weisz plays the beautiful, enigmatic Rachel who becomes suspect to Philip. Philip received letters from his cousin while away that, at first, spoke of an idyllic life with his new wife, Rachel. But later, the content turned to complaining and suspicions about Rachel and her manipulations. Philip journeys to be at his cousin side but, when he arrives at the villa, he learns that Ambrose is dead and Rachel has left. When he returns home, he learns that Ambrose’s original will named Philip as sole heir to his estate. Then, Rachel makes a sudden visit to Cornwall and the suspicious Philip soon comes under her charms. The rest of the film is about Philip fighting his inner demons. On one side, on the scant evidence he has, he wants revenge for Ashley’s death. The other demon is his infatuation, and other scant evidence, that Rachel would not, ever, do harm. The screenplay, by Michell, goes back and forth with Philip vacillating on his emotions of the moment: suspicion versus infatuation. Sam Claflin has the good looks as Philip but I never sympathized with his not-quite-fleshed-out character. Rachel Weisz does the enigmatic Rachel well enough but the enigma shrouds the character. Where I should have been immersed in the darkly tinged mood of the story, I felt more like an observer to a film production process of making the film.