My Brother the Devil 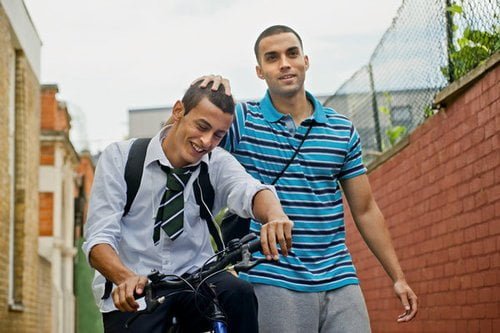 14-year old Mo (Fady Elsayed) lives in a traditional Egyptian home. But, outside the front door are the mean streets of Hackney, a tough neighborhood in London, where gangs rule. Mo’s elder sibling Rashid (James Floyd) runs with one of the gangs and the boy wants to be just like his big brother. Rashid, though, wants a better life for his little bro but the two will soon clash in “My Brother the Devil.”

Sally El Hosaini makes a strong debut with a film that does not go where you expect it to go. When a both a dog and friend of Rashid's are killed in a violent gang encounter, El Hosaini frames both of their lifeless bodies on the street in a powerful image that tells of two innocents both bred to fight. Letitia Wright gives a luminous performance as the young Muslim girl with a strong pull on Mo without being saintly about it.

This is the debut feature film for writer-director Sally El Hosaini and she tells the gritty coming of age story of Mo, a young teen who idolizes his street savvy brother Rashid. His desire to emulate his elder brother is at diametric odds to his brother’s desire to protect him and send Mo to college. The film is about this delicate balance between siblings as Rash tells Mo, essentially: do what I say not what I do. The young actor portraying Mo is new to the screen and El Hosaini gets a solid, convincing performance from the young man. James Floyd, as Rashid, shows his experience as a young actor and believably cares for Mo and their family, even though their father rejects any gifts that come from Rashid’s ill-gotten gains. All of the supporting cast do a fine job in fleshing out the story. Sally El Hosaini shows a deft hand in her story telling and direction belying her inexperience behind the camera. It helps when a director has a quite competent crew on both sides of the camera. “My Brother the Devil” is not just a calling card. It is a nuanced film that explores several subjects from gang psychology, homosexuality and violence to brotherhood and filial loyalty, maybe too fast.