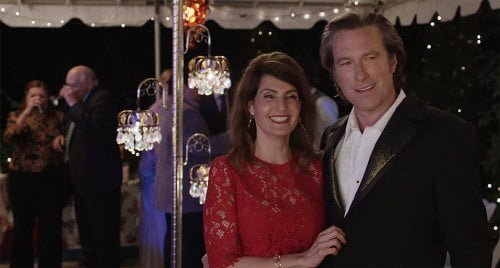 Now the parents of seventeen year old Paris (Elena Kampouris, "Men, Women and Children") Toula (Nia Vardolos) and Ian (John Corbett) are trying to relight a spark in their marriage while also juggling aging parents and how much freedom to give their daughter. Then patriarch Gus Portokalos (Michael Constantine) uncovers a bombshell while attempting to trace his roots back to Alexander the Greek that could blow the family apart in "My Big Fat Greek Wedding 2."

Fourteen years ago, writer/star Vardolos' play was discovered by Rita Wilson, herself of Greek heritage, who produced "My Big Fat Greek Wedding" with husband Tom Hanks. It became the most profitable indie ever at the time. Vardolos has both skipped over and bided her time in reuniting us with the Portokalos family and time's been kind to the original cast, all of whom return, along with their signature peculiarities. Gus still treats Windex as a miracle cure-all, Aunt Voula (Andrea Martin) continues to provide too much information about her sex life and the root of any word, even chimichanga, is Greek. Vardolos, whose smile is so huge and so constant the suns of her cheeks turn her eyes into half moons, really wants us to like her and its hard not to fall in with the loving yet exasperating family she's created. I found the original film grating, one cliche after, but time's worked it's magic with the sequel as well, which, while more of the same (the central plot contrivance is as old as fiction itself) is as warm and sweet as a baklava. That's largely due to the cast. Constantine and Lainie Kazan are front and center, Kazan's new found feminism rubbing up against her husband's long held expectations, both enjoying the 'payback' of Paris's rebellion. As the family pushes her to find a nice Greek boy, Paris dreams of getting away from her family at an out of state college. Constantine's attempt to hook her up with the son of new friends Anna (producer Rita Wilson) and George (John Stamos) confounds even him, but Paris surprises when she asks Bennett (Alex Wolff, Nat's older brother) to the prom right after he's been publicly rejected by another. Prom night is secondary, though, to another family wedding. There are several amusing bits, like the family shifts taken to get Gus through his first experience using a computer or as Aunt Voula takes charge of date night and wedding planning. There's even real emotion as Toula dresses down rubber necking neighbors making fun at her father's expense or the renewal of marriage vows happening secretly as a wedding takes place. Not everything works. There are overworked gags that director Kirk Jones ("Waking Ned Devine") doesn't rein in, the arrival of Gus's brother Panos (Mark Margolis, "Nasty Baby") goes nowhere and production design goes in for overkill, but "My Big Fat Greek Wedding 2" is a lot more enjoyable overall that a lot of what passes for romantic comedy these days. Opa! Grade: