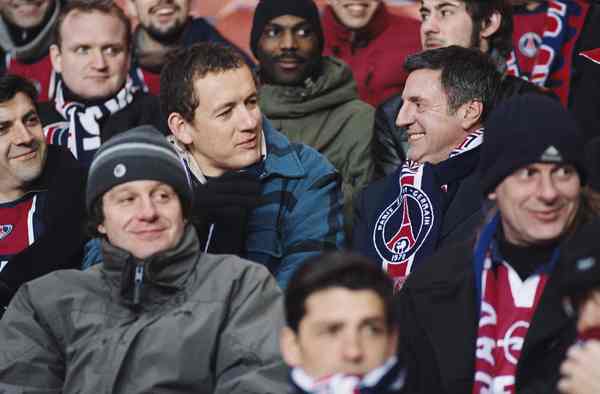 Parisian antiques dealer François Coste (Daniel Auteuil, "Cache," "The Valet") is always focused on his next acquisition to the detriment of personal relationships. He astonishes his partner, Catherine (Julie Gayet, "Almost Peaceful"), by spending 100K Euros of their firm's money to purchase a Greek vase at auction. Later, at a luncheon, he is the one who is astonished to discover that his partner is a lesbian and Catherine takes the opportunity to point out that that is because he has no interest in people and, in fact, has no friends. In a bet, Catherine gives François 10 days to produce the person he considers "My Best Friend."

Cowriter (with Jérôme Tonnerre)/director Patrice Leconte has a filmography full of odd couples, be they new buddies ("The Man on the Train") or romantic pairings ("Girl on the Bridge," "Intimate Strangers"). In his third film starring Daniel Auteuil, Leconte does not offer deep or even subtle observations, but his light look at the essentials of friendship is beautifully acted and quite entertaining. François is amusingly introduced as something of an ambulance chaser, attending the funeral of a client in order to score a coveted wardrobe. We then meet Bruno Bouley (Dany Boon, "Joyeux Noël," "The Valet") displaying his talent for trivia during a pub lunch with the boys. It is clear that these two men will meet and that Bruno will grate across François's grain but still end up as the titular subject. And indeed, Bruno is the cab driver who ferries François to his fateful lunch, or only partially does as the exasperated François hops out early. But, having kept his card, François inadvertently calls on Bruno's services again and begins to observe the man's easy way with strangers. It would seem an easy task for the skilled Auteuil to slip into the skin of François, successful in business yet socially clueless, but Auteuil brings something special to the table here. He keeps François sympathetic even before his transformation begins via expressions that convey openness even though they lack empathy. When the understanding begins to dawn, the moments are sharp. Dany Boon, just terrific as the 'best friend' of "The Valet," does it again as the blue collar dreamer obsessed with becoming a game show trivia contestant. He worships at the altar of Alex Trebeck and regularly dines with his doting parents. Bruno tries to teach François how to be sociable, sincere and smile and while François proves inept time and time again, the two actors easily slide their characters into a natural friendship. "My Best Friend's" biggest pitfall is its script, which seems to have been built backwards from the hook of a game show's 'lifeline.' The actors do the heavy lifting because it is clear that François's need to possess that vase, for example, is written merely for the suspense in knowing it is fated to be broken and for its mythological motif of the friendship between Achilles and Patroclus. Auteuil puts it across, although he is less successful defining his relationships with the women in his life. Lover Julia (Élisabeth Bourgine, "Un coeur en hiver") is simply neglected and the supposed strained relationship between François and his daughter Louise (Julie Durand, "Chaos," "The Russian Dolls") always played like parental concern to me. The film's coda is sweet, but leaves too many blanks to be filled in about François's redemption. If not up to Leconte's usual standards in the scripting, the production is quite lovely, with Jean-Marie Dreujou's ("The Man on the Train," "The Libertine") cooly tinted cinematography beginning on a shot of mosaic stonework accompanied by a very French, yet not touristy, tune. Xavier Dermeliac's original music is inventive throughout. "My Best Friend" is best enjoyed as two fine actors adding notes to familiar terrain.

Francois (Daniel Auteuil) is very well to do Parisian antique dealer who stops at (almost) nothing to make a lucrative deal, even schmoozing a widow at her husband’s funeral. When his partner, Catherine (Julie Gayet), throws him a birthday party, she points out that all his “friends” attending the soiree are really just business associates, telling him he has no real friends. He protests and she makes a bet: produce the person that, for Francois, is “My Best Friend” We have come to expect a great deal from film auteur Patrice Leconte. After all, he has given us such terrific films as “Monsieur Hire,” “The Girl on the Bridge,” “The Widow of Saint Pierre” and “The Man on the Train.” Therefore, we can forgive him for giving us a wispy piece of fluff that is “My Best Friend.” Catherine’s bet with Francois is simple. He recently bought a 5th Century BC Greek vase for the tidy sum of 200000 Euros (in company funds). She asks him to wager his precious antique against proof that he does have a friend - within 10 days. If he does, he can keep the vase. If not, Catherine gets it. His ego gets the best of him and Francois agrees to the challenge. He soon realizes that she is right. Over the next several days, Francois keeps running into a friendly, outgoing taxi driver named Bruno (Dany Boon) who has a real way with people. Though Bruno’s effervescent personality is not to Francois’s liking, he does see the man as someone who can show him how to make friends – and win the bet. Francois recruits the cabbie to give him a crash course in friend making. While I think that Daniel Auteil is one of the world’s greatest actors living, the role of Francois is not his best. Francois is, essentially, a selfish, not very likable guy who garners little empathy all through the film. As such, Auteil is given, and gives, a merely two-dimensional performance that is overshadowed by Dany Boon’s Bruno – who is an affable bloke. The jokes in “My Best Friend” revolve around Francois’s lame attempts to put his newly learned friend making skills to work and failing miserably with every try. The result is a mildly amusing film that is lightweight stuff at best. Helmer/scribe Laconte does not stretch with his direction and the film does not bear his usual signature. This farcical little film has a generic feel that might have been done at the hands of any number of filmmakers. It is not that “My Best Friend” is bad. (It does have Auteil, whom I always like to watch.) It is just not much.