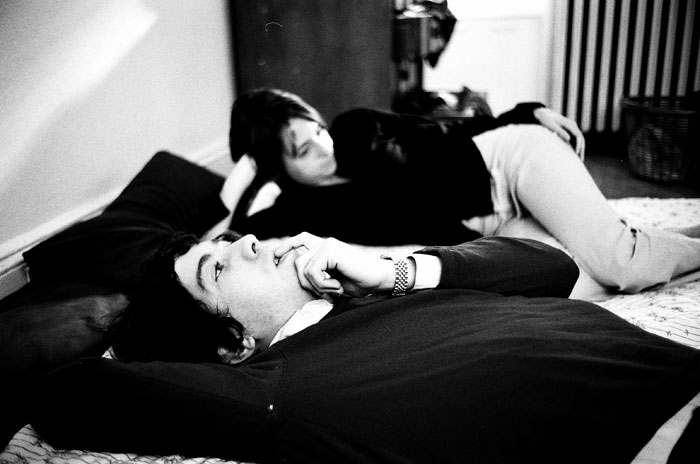 Alan Peoples leaves Boston for New York City with a gig lined up, but no drummer. A local DJ, Sara, who has been pushing his music hooks him up with her brother, Dennis, but that's not all the hooking up she has in mind. But Alan, who is crashing at the apartment of friends Laurence and Ellie, can't help notice his attraction to his best friend's girl. Ellie voices the same kind of feeling and the three friends all deal differently with this "Mutual Appreciation."

Writer/director Andrew Bujalski, who also stars here as level-headed Laurence, made a splash, albeit a small one, with his debut film "Funny Ha-Ha," and while "Mutual Appreciation" boasts many similarities, it also stands apart. The two films are both chock full of the halting, hesitant attempts at communication by college grads a bit unprepared for the real world, but while "Funny" charted the course of one woman (Kate Dollenmeyer, who has a small role here) through multiple romances and reconfigured social circles, Bujalski's latest is an entirely more intimate affair, 110 minutes spent contemplating the impact of a friendly crush. This second film, shot in black and white ("Ha-Ha" was in color), is the more assured of the two, leaving the viewer more fully satisfied. Clearly Bujalski hangs around with one group of talented people. Alan, played by friend (and member of the band Bishop Allen) Justin Rice, wears the constant bed head of uncombed hair that looks arranged just so, a true artiste. While promoting his music, he is confident but nonaggressive, which makes him a perfect target for fan Sara (Seung-Min Lee). Alan's so laid back that it's a bit of a surprise when we finally hear his music, first as he describes to Dennis (Kevin Micka) the simple beat he's looking for (not the kind of rhythm for a true musician), then at his under attended Bumblebees gig (Sara bobs with a smile and closed eyes). It's good stuff - the upbeat pop he's been describing, but with a jagged edge (music by Bishop Allen and Rice). Alan and Ellie (Rachel Clift), who constantly brushes her nose length bangs behind her ear where they remain for all of 2 seconds, riff off each other with shared jokes while Laurence drifts around their apartment, his mind on other things as he affectionately ribs their exchanges. We can see something sparking and when Laurence leaves to attend a wedding and Ellie stays in the city she's playing with fire. But Bujalski isn't into heavy drama. Instead we get the quieter moments that are more character revealing. He himself brings a depth to Laurence we may not have expected which in turn illuminates Ellie's choices. And it's not just dialogue that define these characters. It's what's told by the use of an Italian toast ("Cin cin!") or mattresses on the floor or the way a father lecturing on financial responsibility is ducked. "Ha-Ha's" cinematographer Matthias Grunsky only calls attention to his work when he leaves his camera where it is when his subjects stand up from sitting conversation, continuing to talk as we look at their midsections. And yet this odd choice works, visualizing the awkward of end of communication. Watching "Mutual Appreciation" gives one the feeling of discovery, of finding a diamond in the rough. Bujalski's the real indie deal and deserves a far bigger audience that he's seen so far. Hopefully they'll find him as he is because I half suspect a bigger budget could prove his undoing. I'd be equally happy being proven wrong or continuing to watch him work in his established element.

Sophomore helmer/scribe Andrew Bujalski made a notable debut with his first film, “Funny Ha-Ha,” eschewing professional actors and utilizing a cast made up of his friends. He pulled it off the first time around but can lightning strike twice? Bujalsi forsakes his Boston roots and moves the action for his second effort to New York City. Again, he uses friends and acquaintances as his players and shoots Mutual Appreciation” in black and white. This effort succeeds in making his film feel real with the actors giving a natural air with their “normal” needs and desires and the B&W photography lending verisimilitude to the effort. Mutual Appreciation” is a minimalist film where nothing exciting happens, in the conventional movie sense, but it steeps itself in a natural environment of friends and relationships. The non-professional cast keep this believable as we watch their interactions unfold. Twice now Bujalski has created a compelling film on a shoestring budget, making me wonder what he could do with some real fiscal backing. There is talent here and I want to see what he does next.