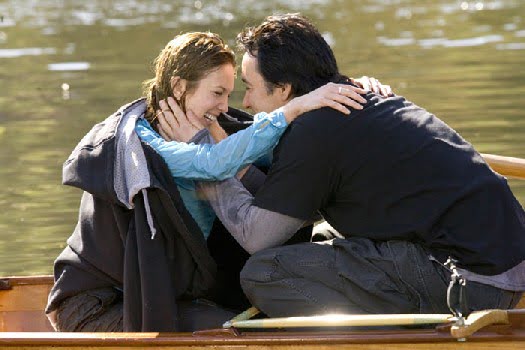 Sarah Nolan's (Diane Lane, "Under the Tuscan Sun") sisters Carol (Elizabeth Perkins, "The Ring Two") and Christine (Ali Hillis) decide that the recent divorcee of eight months has spent enough time hanging around in her pajamas. Posing as Sarah, they entice a slew of suitors from perfectmatch.com when they conjure up a profile looking for a man who enjoys starlit nights and "Must Love Dogs."

Writer/director Gary David Goldberg (TV's "Spin City," "Battery Park"), adapting Claire Cook's debut novel, is blessed with a terrific cast, but they can only do so much to save his film. In "Must Love Dogs" Diane Lane, paired with Christopher Plummer ("National Treasure") and Elizabeth Perkins, evinces great father and sister relationships respectively, and John Cusack ("Identity," "Runaway Jury") is in fine form as potential love interest Jake, but nothing else about this romantic comedy is remotely believable. "Must Love Dogs" is packed with situations that only exist to provide punchlines and actors talking about love without convincing that they're in it. The film begins with a family 'intervention,' with Sarah at the receiving end of pictures, names and phone numbers of all sorts. She's set up at her job teaching preschool with the cliched gay friend (Leo played by Brad William Henke of "Me and You and Everyone We Know"), the single fathers she feels morally obligated to pass on as prospects and the twenty-years younger June (Julie Gonzalo, "Christmas with the Kranks") who attracts them like bees to honey. This doesn't stop Sarah from flirting outrageously with hunky dad Bobby (Dermot Mulroney, "The Wedding Date"), though. She's been warned by his own son that he's a womanizer, but Goldberg needs to keep a stumbling block to the real romance on the back burner. As Sarah begins to go through the traditional montage of bad dates, including the only amusing one in which she inadvertently finds herself meeting her dad, Jake is sympathetically intro'ed as a soulful artisan who loves "Dr. Zhivago" and finds his buddy Charlie's (Ben Shenkman, HBO's "Angels in America") endorsement of 24 year-old Sherry (Jordana Spiro) distasteful. Jake's in it for the long haul. His first meeting with Sarah is considered a disaster (it's not that bad) and he tells Charlie that she 'took his breath away' (not at all evident). A second date ends in an unlucky hunt for condoms, but a third promising connection is interrupted by Bobby and, of course, misinterpreted by the sensitive Jake. Of course, there is no doubt how this will all end - after more obvious obstacles, blind behavior and cliched coincidences. Romantic comedy conventions can be forgiven when the film has sparkle, but "Must Love Dogs" is flea-ridden. This is the type of film where the preschool kids are too precocious (although one honest chuckle came from the face of a Halloween cowardly lion in need of 'emergency pants'), baths are taken surrounded by lit candles and china teapots(!) and everyone in the room seems to know the lyrics to the Partridge Family theme song for an impromptu singalong. Internet dating is a huge theme in the movie, and so perfectmatch.com is clearly enunciated several times, although Stockard Channing's ("Anything Else") character Dolly encourages Sarah to create different personalities on different sites. (Sarah ends up getting an emergency visit from the sixty-one year old Dolly with her out-of-town seventeen year-old Internet flame in tow, even though Dolly's proven herself quite capable on her own - another obvious contrivance to milk laughs.) Sarah also develops an uncharacteristically antagonistic relationship with her butcher (Kirk Trutner, "The Medallion") when he tries to convince her of the economy of buying more than one breast of chicken. Their banter is forced, but the deli guy clucks approvingly when a late breaking kiss from Cusack turns his surly customer into a real lovers' Lane. Cusack has shone in this genre before, from "The Sure Thing" and "Say Anything in the '80s to 2000's "High Fidelity." Lane started even earlier with 1979's "A Little Romance" and recently charmed in "Under the Tuscan Sun." But Gary David Goldberg's direction of the courtship dance keeps his leads' chemistry out of step until their final bow. This cast set expectations way higher than were met.

Must Love Dogs” is the kind of film that benefits far too much from its very talented veteran cast. Sophomore feature director (though with a long career in television) Gary David Goldberg, adapting Claire Cook’s novel, apparently hasn’t met a cliché that he didn’t like and appeared to use as many as he could here. Diane Lane plays 40-ish pre-school teacher Sarah, a recent divorcee whose ex just lost interest in their marriage. Her sisters, Carol (strongly played by Elizabeth Perkins) and Christine (almost invisibly performed by Ali Hillis), are bent on getting Sarah back into the dating market and register her, without her knowledge, with an internet dating service. The usual batch of bad dates takes place and Sarah is about to give up hope of ever finding a man. Then, two things happen: she meets the father (Dermot Mulroney), separated from his wife, of one of her (of course) precocious pre-school students and immediately connects with him. But, scruples over dating a student’s parent come in to play for Sarah and she keeps him, Bob, at arms length. Meanwhile, she does hit it off with Jake (John Cusack), one of her Internet connections, and they begin dating. As one expects in this kind of romantic triangle, unspoken misunderstandings prevail and the bulk of Must Love Dogs” shifts back and forth between romances. Of course, since Lane and Cusack are the topped billed features, you can guess who is going to end up with whom. This is paint-by-the-numbers filmmaking and is relegated to the doldrums of summer entertainment. To its credit, “Must Love Dogs” does have a solid, experienced cast that make the clichéd material seem a lot more entertaining than it should be. Lane is a beautiful, assured actress and has nice screen presence here. Even though there is little by way of chemistry between the principles, John Cusack does give a cynically amusing perf as a man at lose ends with life. Mulroney does his best as the second romantic banana and a good alternative to Jake. Christopher Plummer, Stockard Channing and Perkins do their best to fill out their woefully stick-figure characters. Perkins, in particular, steals the screen every chance she gets as the older, more daring sister Carol. The rest of the cast is without note. There are some cute dogs, though. Must Love Dogs” is a chick flick, pure and simple. I can’t even rate it as a date flick because most guys are not going to fall for this crap. Good actors are wasted in a mediocre film.