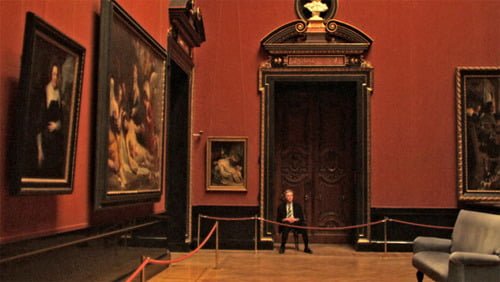 Johann (Bobby Sommer) is an aging museum guard who observes, day by day, the comings and goings of those who come to visit and revel in the work of Pieter Bruegel the Elder and other famed artists. One visitor, Canadian-born Anne (Mary Margaret O’Hara), in Vienna to be with an ill cousin, forms a fleeting relationship with Johann while she is in the beautiful city in “Museum Hours.”

In Vienna's Kunsthistorisches Art Museum, a museum guard, Johann (Bobby Sommer), sits motionless in a pumpkin colored room surrounded by heavily framed oil paintings. In his calm, even voice, he explains how much he enjoys his seemingly boring job, embracing the quiet after years of noise. He is always finding something new in the art he protects as well as the people who visit it and when he meets a woman, Anne (Canadian songstress Mary Margaret O'Hara), the only relative hospital officials could find to notify of her coma-bound cousin, Johann takes her under his wing and finds a kindred spirit during "Museum Hours." It's been thirteen years since writer/director Jem Cohen's "Benjamin Smoke" and while he's had other projects in the ensuing years, none have gotten as much theatrical play. So what a surprise his stunningly sad and beautiful "Museum Hours" is, a unique film that celebrates art, the city of Vienna and the profound friendship born of a kindness from a local to a visitor without many resources whose very trip is itself an act of great compassion. Cohen's widescreen film (he coshot with Peter Röhsler on 16mm film for exteriors and digital for interiors) is punctuated with montages of Vienna and its people preceding or following works of art that complement the modern day images, like a conversation across centuries. He uses cuts to black (Cohen also coedited with Marc Vives) to accentuate, to 'frame' his images. Sometimes these reveries arise from Johann and Anne's conversations, which can be heard over the imagery. Johann strikes up a conversation with Anne over art and learns she has traveled from Montreal to attend to a cousin she hasn't seen since childhood. He realizes she has little means and doesn't hnow a soul, so arranges for a museum pass for her. Soon, they're dining together in small cafes (one features a wall full of photographs telling many stories, a photographic history, another museum of sorts). Johann even accompanies Anne to the hospital, translating the doctor's reports for her. Anne is committed, talking and singing to her cousin to engage a mind which just may be aware. Johann clearly prizes people, a voiceover at one point relating his friendship with a 'punk' college art student with radical thoughts about art and the museum where they both worked together. He misses the young man and talks about the youth groups who snicker at the eroticism on display and poke fun at the artworks, behavior he admits he also would have indulged in at that age. Later, single patrons are shown observing the paintings in the nude, the art and its appreciators become one. The third act of "Museum Hours" features visiting Bruegel lecturer Gerda Pachner (Ela Piplits) as she interprets the works in the Bruegel room (this sequence goes hand in hand with Lech Majewski's "The Mill and the Cross," a work which brought to life twelve characters from Bruegel's painting). Johann listens from the doorway as Gerda theorizes, and, most amusingly, puts an obnoxious visitor in his place using Bruegel's art. As the film comes to its conclusion, we see preparations for Anne's departure, which is never commented upon. Johann remains with his paintings, their visitors a constant, changing landscape.

Filmmaker Jem Cohen cannot quite shake his long time documentary roots in this enigmatic little film that is a cross of a languid little romance between Anne and Johann and a travelogue of Vienna and its grand Kunsthistorisches Art Museum and its magnificent art collections. In the midst of the story about the two principals and their short relationship is an art lesson that brings us into intimate contact with the works of Bruegel, and others, who has a style strongly reminiscent of Hieronymus Bosch (whose works came a generation before the Elder’s). At 107 minutes, “Museum Hours” should have been tightened up considerably. The art lesson is interesting and the visually stunning works of art makes for a nice documentary. Cinematographer Peter Roehsler has an amazing eye for shot composition and his photography of the copious art on display in the museum borders on brilliant. The story between Anne and Johann is far too languid and slight to keep my interest in the two, though. Jem Cohen should have either made a real drama or a documentary on Vienna and its art. The composite of the two is less than its parts.